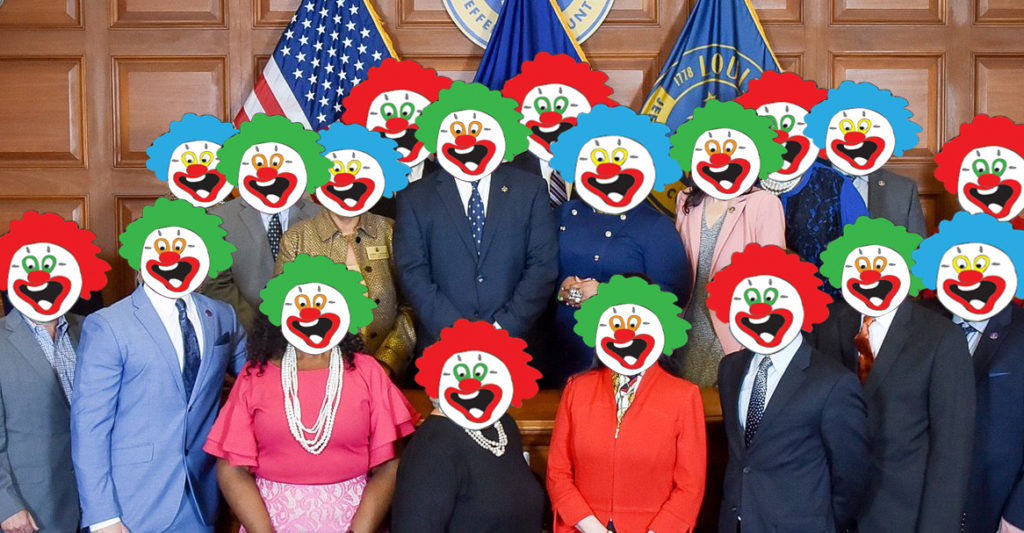 Louisville’s budget would have passed unanimously — if not for Councilwoman Madonna Flood.

“I, in good conscience, cannot vote for something that puts the most vulnerable people into crisis situations,”the Democrat told fellow council members before the budget vote June 25.

Flood also had been in the minority of 11 members who voted in March for a new insurance premium tax. That tax, costing the average homeowner less than $12 a month, would have let the Metro Council pass a budget with far fewer cutbacks.

Instead, 24 of Metro Council’s members (one was absent) voted for the budget that forces $25.5 million in cuts.

Mayor Greg Fischer joined Flood in predicting that the budget would press inequity in the city.

“Though the Council approved 99.5% of the budget I proposed, and I do appreciate that, I would not be doing my job if I did not share with you my concerns about their changes, including that their choices may deepen inequities in our community,” said  Fischer in a statement.

The mayor accused the council of having saved libraries at the expense of community-based violence prevention programs and by turning over the county’s youth detention center to the state.

Councilman Anthony Piagentini, R-19, who voted against the tax, said Fischer mischaracterized the process and there was no one-for-one trade off between libraries and those programs.

The budget cuts already are being felt, and Councilman Bill Hollander, D-9, the chair of the Budget Committee, warned that they’ll likely get worse unless the city finds new sources of revenue.

By 2023, the city is expected to be short $65 million, according to estimates from the mayor. As such, Hollander wants the city to start lobbying the state legislature for permission to enact taxes on restaurants and hotels, as well as a local option sales tax.

Other council members, particularly Piagentini, have talked of tightening enforcement on other taxes (on the paychecks of visiting performers, for example), and of finding ways to make the government more efficient, such as through finding a private company to run the city’s parking system.

For now, though, there’s no escaping the pain inflicted by the new budget, which took effect July 1. Weekly recycling and yard waste pick-ups were saved, and two of four pools are expected to reopen next summer. But expect slower response times for pot holes and icy roads because of fewer Public Works employees.

Here are other city services that will be affected — or not — by the new budget:

The hours at all of Louisville’s libraries will remain the same, and the city’s Middletown library branch will re-open — two victories for Piagentini whose district is home to the Middletown branch and who has said libraries are an essential service.

“The libraries are education for everyone, at anytime, at anywhere,” said Piagentini.

Fischer’s budget had called for fewer hours and closures on alternating weekends for all Louisville libraries except for the main branch and the newer regional centers. It also closed the Middletown and Fern Creek libraries before the budget vote, which upset several council members.

Under the approved budget, the Fern Creek library will remain closed and the library system will still lose employees.

Jefferson County will no longer have its own youth detention center after the council voted to transfer control of Louisville Metro Youth Detention Services to the state.

Justice and Public Safety Cabinet Secretary John Tilley told the Courier Journal that the state cannot afford to staff the facility, so juveniles might be forced to transfer to the state’s other detention centers in Boyd, Breathitt, Campbell, Fayette, McCracken and Warren counties.

But Council President David James said the city is working with the state on finding another facility near or in Jefferson County so minors can be closer to their homes and families.

Response times might rise for Louisville’s police, fire and emergency medical services under the new budget.

The council did not reinstate a June police recruit class that Fischer had canceled in preparation for the budget cuts, but they moved up another recruit class by a month. Still, the city will have 40 fewer police officers at the end of this year than it had at the beginning.

The city also planned to close a fire station at Grade Lane, but on Wednesday, Louisville Fire Chief Greg Frederick announced that the department would be making changes at the Rubel Avenue station instead, replacing a ladder truck with a different vehicle called a quint, while still laying of 15 firefighters.

The city is eliminating $1 million from the Office for Safe and Healthy Neighborhoods, which includes funding for a violence prevention model called Cure Violence that involved hiring community members, called  “interrupters,” in the city’s deadliest neighborhoods to mediate potentially fatal conflicts.

Eddie Woods is the director of No More Red Dots, which operates two of the city’s Cure Violence sites. The program received $800,000 of its $840,000 budget from the city. Without the money,  the program cannot pay most of its employees, but Woods said that it has functioned without city funding in the past, and it can do so again. “My people are very committed to this work, so they’re going to be doing this work regardless,” Woods said.

At least eight of the 22 employees may stay with No More Red Dots, according to Woods.

One other Cure Violence site, operated by the YMCA, will close. The city will still fund two hospital-based violence reduction programs.

Woods said the city’s decision has a benefit: After receiving city funding, the program was relegated to operate in only a couple of neighborhoods. Now, he said, No More Red Dots can do its work citywide. Still, he is worried that the city’s decision to cut his funding will worsen already high homicide rates. “They couldn’t have picked a worse time to have this whole budget crunch,” he said. •