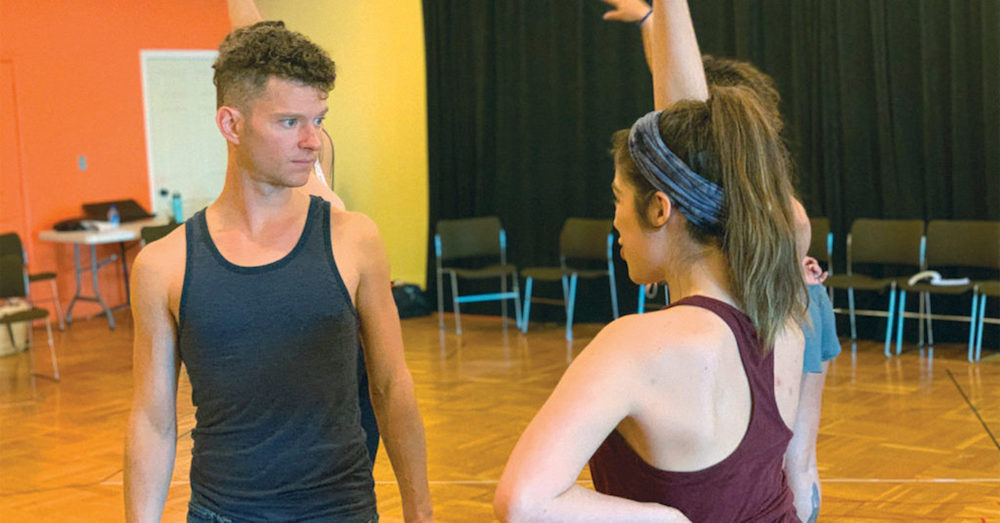 Jazzy battle scenes. “Sex presented pastorally.” A legendary original choreographer, and a hit revival known for its stunning aerial acrobatics. It’s no wonder that many theater companies are a little intimidated to put on “Pippin.” But Acting Against Cancer has always preferred to take on less conventional musicals. So, it reached out for a collaboration with CirqueLouis, which decided not to put on a summer production so it could have more time to devote to “Pippin.”

When rehearsals started, the 14-person Acting Against Cancer cast and 18-person CirqueLouis cast worked separately, finally coming together for one or two rehearsals a week beginning in mid-July while still having separate rehearsals throughout. The combined rehearsals can be chaotic, a crowd of constant movement, but the support amongst the casts and the excitement to bring the show to the stage make it well worth it.

Even at Saturday’s choreography rehearsal, which was just the AAC cast, the choreography was still being fine-tuned. It was the first choreo rehearsal that’s meant to run straight through, no notes or interruptions, but the occasional, quick workshopping was inevitable.

“What was that movement right there?” called choreographer Paul McElroy as he mimicked the gesture of a hand raised above the head, extended forward. It’s a move that was tacked on the last time the number was rehearsed. McElroy, fellow choreographer Zachary Boone and dance captain Celeste Vonderschmitt spent the next couple of minutes working to make the section of movement more fluid.

After all, it’s a language within itself, expressing the songs just as strongly as the composition and lyrics. So it’s important that every step conveys the message in the best way. But with “Pippin,” there’s also a legacy. The original choreographer, Bob Fosse, is perhaps the most famous choreographer in America, known for “Chicago” and “The Pajama Game.” When the show was revived in 2013, it was given a circus makeover, with dazzling cirque choreography to make “Pippin” truly a spectacle.

AAC’s production, with its turned-in knees, “Manson Trio” dance and collaboration with CirqueLouis, aims to pay homage to both of these performances, but they don’t want to simply mimic them.

“It’s been a challenge for us,” says Boone, “because we want to stay true to the spirit of the show, but we don’t want to copy anyone.”

It’s for that reason that even as I watched the rehearsal, I saw the movement change before my eyes. AAC’s “Pippin” isn’t going off an established guide. They’re making their own thing.

There was dead time in long instrumental breaks, questions of whether to rest wooden swords on shoulders or raise them in the air and questions of “Why was that early?” due to miniscule but crucial steps out of sync with the music. But these moments were met with good-natured laughs and teasing, as well as helping each other with their individual parts.

According to Director Remy Sisk, who also plays Pippin’s meathead brother Lewis, that makes all the difference: “There’s a lot of support in the room.”

Some of the changes themselves added to the levity of the room. At one point, seemingly out of nowhere, Boone said to Sisk, “I just had an idea that was so filthy,” referring to an already suggestive number between Sisk’s and Julie Riehm McGuffey’s characters. “You’re going to love it.”

In total, the show’s choreo took about an hour to run through. Most of that time was spent on the big moments such as the opening number or the battle portrayed in “Glory.” The next hour was dedicated to reworking some of the songs that didn’t feel quite right yet. Occasionally, they’d go back and forth on a particular bit until a choreographer decided to keep it, “for now until it isn’t working.”

Of course, the show itself will be twice that length, but not everything will need detailed choreography. There are also numbers in which large parts of the choreography are done by the CirqueLouis crew. That Saturday, we had to simply imagine the invisible moving parts. When the cast turned their head toward stage left, it’s understood that they’ll be looking at the cirque performers. When they swiveled their heads stage right, it’s the same principle.

In fact, the songs that typically need the most attention are the songs in which the full context is missing. For instance, the director and choreographers found themselves in a conversation about getting the dancers “out of the way of the throne,” which will be brought onto the stage during a particular transition. In the empty rehearsal room, there was no throne to be seen, but the cast had to move as if the stage was set.

War may be a science, but choreography, after all, is a language. •