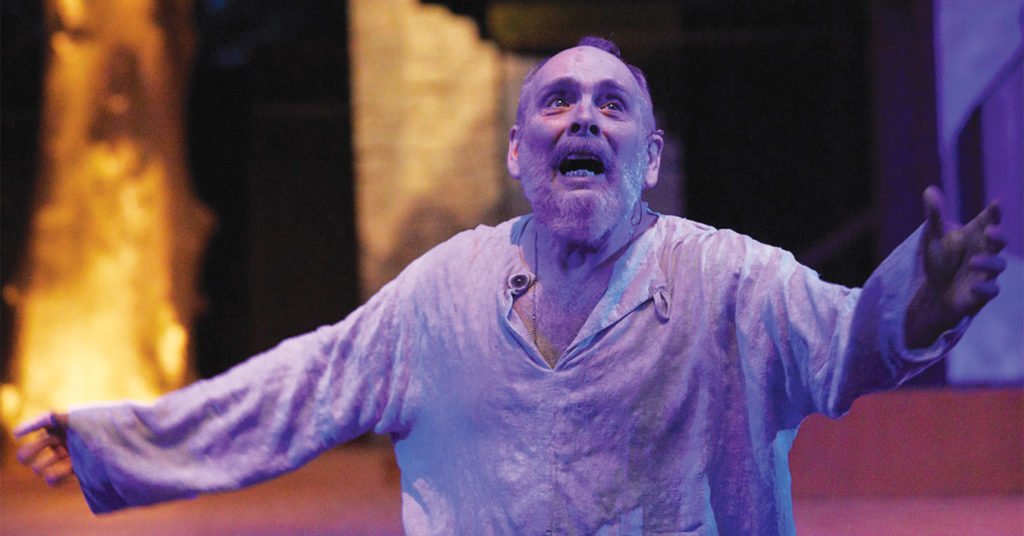 Kentucky Shakespeare’s first play of its festival in Central Park was a production of “As You Like It” set in 1800s rural Kentucky. The second, “Henry IV, Part 2” took the audience back to early 15th century England. As the final of the main three plays, “King Lear” goes even further back, honoring the inspiration of the legendary King Leir with a pre-Roman Celtic setting. The veneer of old, gray stone transforms the walls, and the actors appear in simple tunics and hide to set the stage.

I had not seen or read “King Lear” before this production, so it was a rare opportunity in which I could see a Shakespeare play and know nothing beforehand other than that it was a tragedy. What struck me the most was the simplicity of the tragedy itself. Many of Shakespeare’s tragedies come down to a misunderstanding or pride, but something about the catalyst of this story feels incredibly human.

An aging King Lear (Jon Huffman) seeks to divide his kingdom amongst his three daughters, but first, each one must explain how much they love him. The elders, Goneril (Abigail Bailey Maupin) and Regan (Hallie Dizdarevic) are quick to flatter him, though they later admit they don’t feel it. His third and favorite daughter Cordelia (Amber Avant) finds herself at a loss for words. She admits that she loves him but is unable to shower him with flattery in public, and the hot-headed Lear, insulted, banishes her, along with his most faithful adviser, Earl of Kent (Dathan Hooper) for defending her.

From there, the main plot follows further family divisions and descent into madness and senility. Lear’s demise has little to do with any conniving or plotting — though the side plot with the Earl of Gloucester (Jennifer Pennington) and her sons, rakish Edmund (Braden McCampbell) and Edgar (Neill Robertson), have plenty of the old family treachery, as well as Goneril and Regan’s interactions with each other — but through disagreements and short tempers that eventually lead to the deaths of the whole family. The causes of the fallout are just familiar enough to any audience member with a family to make them squirm a little. It’s fitting, and reminiscent of the earlier declarations of “love,” that the last lines of the play instruct to “speak what we feel, not what we ought to say.”

That’s not to say that “King Lear” is tame for a Shakespeare tragedy. In fact, between deadly sword fights and a character whose eyes are literally plucked out of their head, this tragedy is probably a good fit — though generally easier to stomach — for those who enjoyed Kentucky Shakespeare’s “Titus Andronicus.” Tension is palpable throughout, from the fierce verbal blows as well as physical fights to Lear’s struggle to keep a hold on his own mind.

One agent of tension that was outstandingly achieved was Laura Ellis’ sound design during the fierce storm that takes place surrounding the intermission of the play. Lear is thrown out by both his daughters and into a wild storm with his Fool (Tom Luce) and his servant, Caius (secretly the Earl of Kent in disguise). The winds and thunder claps fit the scene so well that I almost expected to feel pouring rain, even on the hot, dry Saturday when I saw the play.

Seeing Luce as the Fool, aiding an aging king, is an interesting casting to those who also saw Henry IV, Part 2, in which Luce was himself an aging, anguished king. That choice may not have been intentional (though it was effective), but Pennington’s gender-swapped portrayal of the Earl of Gloucester certainly is one of the strongest performances of the night. Not having read the play, it didn’t occur to me until later that the role is typically one played by a man, because it works so seamlessly as a female role. There’s something refreshing about seeing a woman in a position of power in a Shakespeare play with no reference to a man from whom she gained that power.

The sisters were all also standout performances. Even before Avant’s “Nothing” speech, the anxiety on her face tells the audience that she is the only daughter actually being sincere and thoughtful in this scene. Dizdarevic’s Regan is cool and haughty and, at points, vicious, eagerly taking over the task of removing Gloucester’s eyes after her husband is mortally wounded. Maupin’s Goneril, on the other hand, is a master manipulator, able to garner pity when she needs to even as she schemes. Another performance that stood out was that of McCampbell’s Edmund, who ruins his family mercilessly out of bitterness that he’s been pushed aside as an illegitimate son and makes the choice to try to do an ounce of good a few seconds too late. Robertson as brother Edgar gets to play the full range, from a good-hearted and fairly stable young man to his disguise of a mad, nearly naked beggar covered in dirt, “Poor Tom.”

The show also does well in having doses of humor in between all the heaviness, whether from the king’s Fool; the rivalry between “Caius” and Goneril’s man, Oswald (Crystian Wiltshire); and even lines from Lear himself. Even in the most serious of moments, such as the last scene, the audience chuckles a little as a Captain rushes in to announce that Edmund is dead and the Duke of Albany (Gregory Maupin), surrounded by dead bodies, says, “That’s but a trifle here.” Those laughs add a valuable reprieve from the intensity of a dark, but human tragedy. •