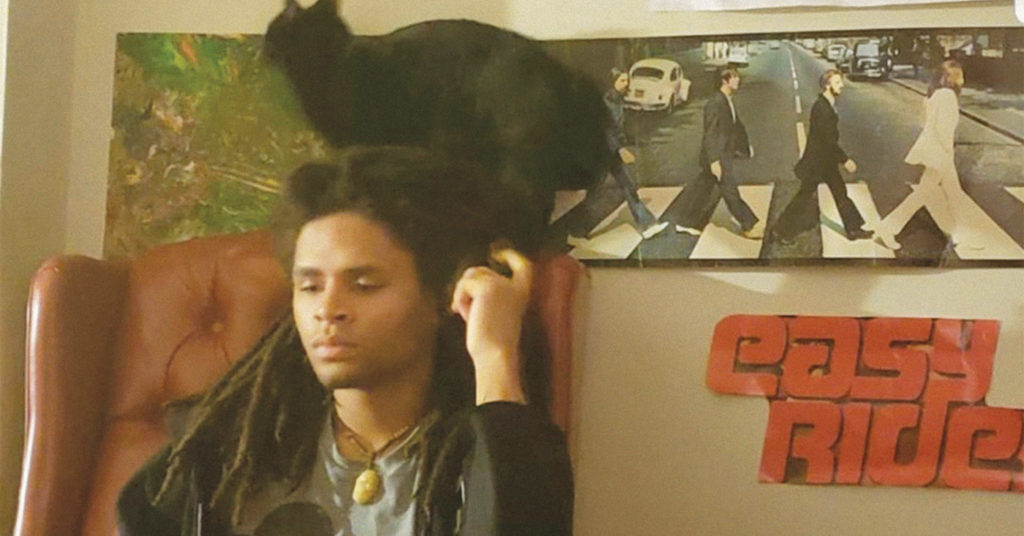 There’s a melancholy, alt-rock song that uses self-cannibalism as a sensational reflection of how difficult it is to currently afford basic necessities like groceries. And a tongue-in-cheek punk burner about friendly fans that features elements of hip-hop. Both are on Hazelfire’s newest album, Initiation, which contains some of the most strikingly versatile and unpredictable songs in the city. Some are serious. Some are goofy. Some are prog-metal. Some are unlike anything else.

“I don’t like putting myself in a box,” said Hazel Kuran, leader of Hazelfire. “I think it’s really boring doing the same thing over and over. I feel like there’s so much potential to do anything that you want. It’s really fun to take two things and kind of put them together and see what you can get from it.”

Hazelfire dropped Initiation last week as a follow-up to the debut full-length, Pandora’s Box, which was released in January. Live, the band plays as a trio, but, thus far, in the studio, it’s mostly been a solo project for Kuran. Pandora’s Box was concept-based, Kuran said, about philosophical anarchism and being true to yourself, while staying safe in the scene and clear of toxic people. It also wove in a lot of spiritual and mythological elements, making for a complex and dense album that has a lot of ambiguity and layers hidden. While that same sort of personality and idiosyncratic shaping is on Initiation, the second record is a bit more accessible.

“On this album, I feel like there’s more relatability,” Kuran said. “I feel like it actually touches on a lot of social issues that have been going on.”

Songs such as“Punk Rock Poetry” are rebellious anthems, but one of the most interesting threads on Initiation is the idea of how hard it is to exist, especially as a young person, in a society where the cost of living is skyrocketing and wages are not. “The Starving Artist” is a straight-forward look at the hardships of being a creative, “The Great Famine of the Young Adult” is the aforementioned song about taking bites out of yourself and “Make That Money” is about how people sometimes have to turn to less socially acceptable ways to financially make ends meet.

“It’s hard living in the world today, because everything is so expensive, and just having a job alone doesn’t do enough,” Kuran said. “One job just doesn’t pay, so it kind of forces you to go through the stuff that’s kind of looked down upon. Like selling drugs or robbing people. Selling your body. Sex work. It’s looked down upon, but sometimes it pays way more than an actual job you’re trying to commit to.”

There are also lighter moments on Initiation, including “Hazelcult,” the aforementioned song about his fans.

“It’s like, this is super goofy,” Kuran said. “I just wrote that song because everyone supported the band so much, and there was a guy who posted ‘If you’re a fan of Hazelfire, does that make you a Hazelnut?’ And I was like, ‘I love that. I’m writing a song about that.’”

Kuran, who is 20 and from Lexington, moved to Louisville about a year ago. His path into music was indirect: His grandfather bought his brother a guitar, and when his sibling took no interest in the instrument, Kuran decided to give it a try: “He never touched it, and one day, I was like, ‘I’m way too curious: How are you supposed to play this?’ So, I started messing around with it.”

A neighbor showed him a few chords, and he started picking it up quickly, but his ability really started to surface during his junior and senior years of high school, when he attended a an alternative, project-based school called The Learning Center in Lexington.

“We didn’t really have homework,” Kuran said. “We really didn’t have tests. Instead, we had nothing but projects of our own choice. I was like, ‘I want to do music.’ They had an audio studio there. Which was really nice. It was such a blessing for me. And I pretty much learned the basics of using digital audio workstations, how to write music, how to be a better guitarist.”

When he arrived in Louisville, Kuran quickly fell into the local music scene and started playing bass for Bird-Dog & His Coyote Gospel Choir — time he said helped him prepare for the organizational and business side of being in a band.

“I feel like playing in that band, it gave me a lot of guidance on how I should really just lead the band,” Kuran said. “I think Bird-Dog is a really good band leader — he keeps everything organized, he knows how to stay focused, he knows how to book shows.”

When he branched out onto his own late last year to start Hazelfire, he created something with intense dynamics and a disregard for structure, turning his studio work into wild roller coaster rides. And Kuran said this is just the beginning.