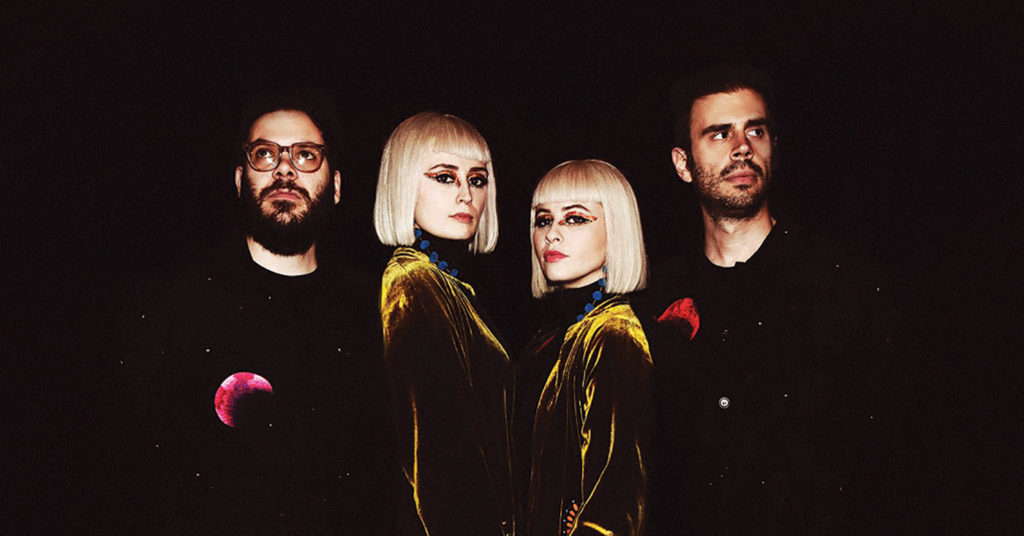 After spending a few years collaborating with renowned artists such as Roger Waters of Pink Floyd, Holly Laessig and Jess Wolfe are shifting their focus back to their four-piece band, Lucius. This summer, they’re playing festivals across the country, including Forecastle.

“We haven’t been doing the festival circuit as much with the band, and we’re pretty excited to get back into that,” Laessig told LEO.

The two are lead vocalists of the Brooklyn-based band, embodying total uniformity in their performance, even singing in unison and facing one another onstage.

“We thought it would be really cool if we could get it really tight, it would sound like a double track vocal, but you could do it live,” Laessig said. “With that came the idea of one voice, because our voices separate sound very different, but together sound like a different entity.”

The blending of their voices is also accompanied visually by their outfits. Although the two look different from one another in everyday life, they brand themselves as one, dressing identically — from their vintage dresses, to the glitter in their flashy eyeshadow.

“It’s just been this exploration in reflection and connection and what that means to see almost yourself across from you every night, singing the same words that you’re singing,” Laessig said. “It’s trippy.”

Finding outfits in pairs is sometimes a challenge, Laessig said, especially because Laessig and Wolfe have a distinct, retro style.

“The ideal scenario would be to find a vintage shop that has two of everything,” Laessig said. “We love vintage clothing, but when do you ever find two of something in a vintage store? Never.”

The pair is joined by male counterparts Peter Lalish and Dan Molad, who complement the two musically like “puzzle pieces,” according to Laessig.

Although the band has a tendency to “dress it up” on stage, incorporating visual elements into their art, their 2018 studio album was titled Nudes because it does the opposite — it cuts their sound to the bone with a mix of new, reimagined and cover songs, all of which are played acoustically.

“We want to give you a piece of some of our favorite memories, which are that part of the show that strips down — I mean, sometimes we would go into the middle of a crowd with no microphone or anything and just sing with everybody,” Laessig said.

The band released Nudes as a reminder to their fans that although they’ve been busy collaborating with other artists, they’re ready to put on a show.

“We’re just trying to keep it fun for everyone and ourselves, too,” Laessig said. “Creating a world and an experience with each record. And being able to step out onstage and entering somewhere else with the audience.” •