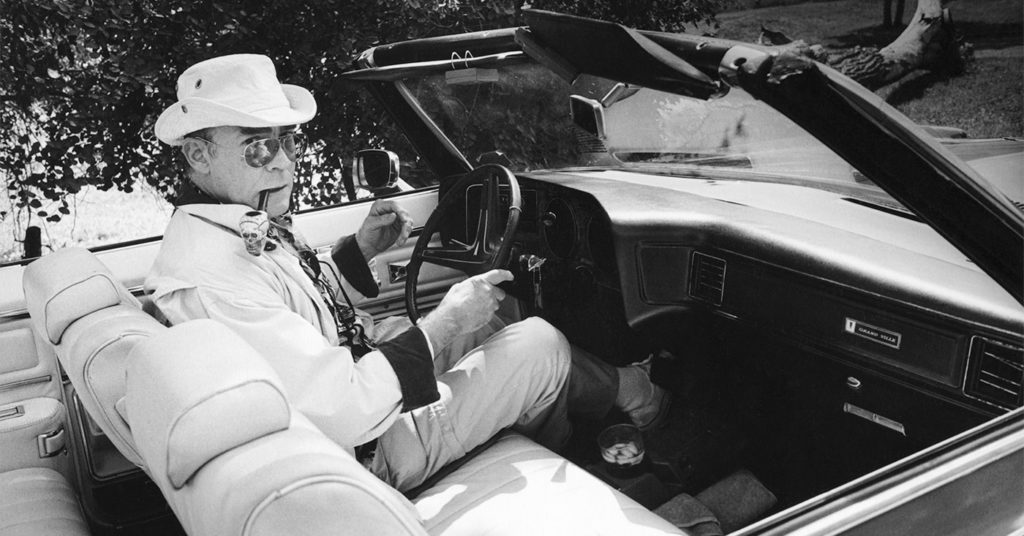 Like artificial sweetener and Post-it Notes, Gonzo Journalism was born of desperation and error. On a foul spring afternoon in 1970, barricaded in a room at the Royalton Hotel on 44th Street in New York, Hunter S. Thompson stared at the paper in the machine before him, wondering what in the name of jabbering Jesus he was going to do.

Then came the knock at the door and the arrival of the copy courier, working for the editors down the street in the office of Scanlan’s Monthly. Earlier, Thompson had handed the boy what he’d completed, the first part of his story on the Kentucky Derby. But when the telltale knock came again, Thompson was still staring at empty paper in his wretched typewriter.

To feed the editors, he ripped several sheets of scribbling — on yellow, legal-sized paper — from his notepad, and sent the boy on his way. When the boy left, Thompson sat, finished his cigarette and began packing for his return home to Colorado. My career is over, he thought. I’ll never work in this business again.

“I was full of grief and shame,” Thompson recalled. “It was the worst hole I’d ever gotten into. I was finished. I was sure it was the last article I was ever going to do for anybody.”

Then came another knock at the door. Please sir, can I have some more? The boy was back. Turns out the editors had liked Thompson’s notes and planned to print them word for word, unedited, in the magazine. So he gave the boy more notes.

“The Kentucky Derby is Decadent and Depraved” appeared in the magazine the following week. By then, Thompson was back in his fortified compound outside Woody Creek, Colorado, but soon the messages started to arrive. He’d written to his friend Bill Cardoso that he had produced a piece of irresponsible journalism. The letters and phone calls made him think he might’ve short-changed himself. After reading the piece, it was Cardoso who wrote back with the greatest praise. “I don’t know what the fuck you’re doing,” he said, “but you’ve changed everything. It’s totally gonzo.”

Cardoso worked at The Boston Globe, and “gonzo” was local bar slang. It was used to describe the last one standing after a night of heavy drinking. That person, according to Beantown lore, was gonzo.

Others called the piece a breakthrough, the next step in the evolution of journalism. It was both the best and the worst thing to happen to Hunter S. Thompson. “I thought, ‘Holy shit, if I can write like this and get away with it, why should I keep trying to write like The New York Times? It was like falling down an elevator shaft and landing in a pool full of mermaids.”

From that seed grew the global intellectual industry of Gonzo. For its creator, a self-described lazy hillbilly, the persistence of Gonzo surprised and amused. Born — in part — of sloth, it was another successful effort to see what he could get away with. “Getting away with it” was a dominant theme in his life. The resonance of his work, even after his death, would have startled him. The geographic reverberations of his accidental invention would have struck him mute.

Thompson’s Gonzo ethos has remarkable endurance and global adaptability. He is, for much of the world, the quintessential American voice. (My most reliable royalties from my “Outlaw Journalist” biography of Thompson come from the British Isles.)

That Boston slang word gets tossed around an awful lot, and though aging dilettantes such as myself still prefer the “pure” definition of Gonzo (i.e., “whatever Hunter wrote”), it’s time for even us geezers to admit that this thing has become a frothing Godzilla of world literature.

With his ideas in the public domain, it’s no wonder that the Web ethos (“Copyright? We don’t need no stinkin’ copyright!”) has glommed onto Gonzo. The democratic nature of the internet gives a platform to all. Some writers — often the ones who find themselves shut out of commercial outlets — have vented their Gonzo spleens in the free-form environs online.

Of course, finding these screeds, no matter how well done, becomes the issue here. More, we have learned, is often less. The world labors under a crush of online commentary, political venting, listicles, clickbait and kitten videos.

That world was alien to Thompson, who never used a personal computer and instead picked away on his IBM Selectric II. (His assistants kept ordering him PCs, but he had no interest; the last one never even got out of the box.) It’s difficult to determine how Thompson would have dealt with the massive amount of information coming at us daily on our smartphones. That device did not exist when he took himself out in 2005. Would he have applauded the sudden cacophony in the marketplace of ideas, or would he have found tedious the self-indulgence propagated by wide-open cyberspace and no editing?

Despite his pop-culture caricature (and his inherent laziness) Thompson was exacting, demanding and often meticulous as a writer. Just as he didn’t suffer drunks gladly (despite his Herculean alcohol consumption), he also held other writers to a high standard. A fierce defender of all of those who rode for the Gonzo brand, he would be unlikely to approve of anyone co-opting his invention and diluting it through either poor work or hastily formed opinions.

The style and the attitude born of desperation in that hotel room half a lifetime ago has endured, long after its founder’s death. It’s hard to know how he would regard the work calling itself Gonzo today. Can Gonzo be self-proclaimed? Is it a starting point or is it a result? He’d likely argue that Gonzo was all his and that young writers should stop trying to be him.

Agreed on that point. I’m in my fifth decade of teaching writing. Nearly every semester, by the end of the term, my young writers feel comfortable enough to propose that they write a “Gonzo” article.

Corny, yes. But it makes the point.

Hunter sometimes off-handedly said Gonzo was “free lunch, final wisdom, total coverage.” The best working definition for me is that Gonzo is whatever Hunter Thompson gave us. This makes for a difficult world when so many yearn for a new Gonzo voice. My advice would be not to try to exhume something so distinctive and so profoundly gone, but to find a new voice.

Still, as modern America circles the drain, I’m often asked by students and other readers, “What would Hunter say?” I don’t know; I would not presume to know. He was a complicated man and impossible to predict. But the short answer is this: If Hunter was alive today, he’d kill himself. He was a patriot and an admirer of those great, handwritten American documents. He could not have lived in the world where the best principles of our nation were fouled upon by buffoons.

But in a sense, we do know what he would think about America today. Here, with only the slightest editing, is how Thompson might regard this place, which was once his country: “This may be the year when we finally come face to face with ourselves; finally just lay back and say it — that we are really just a nation of 325 million used car salesmen with all the money we need to buy guns, and no qualms at all about killing anybody else in the world who tries to make us uncomfortable….. What a fantastic monument to all the best instincts of the human race this country might have been, if we could have kept it out of the hands of greedy little hustlers…. Jesus! Where will it end? How low do you have to stoop in this country to be president?“

(He published that on the eve of the presidential election in 1972. All I did was drop the specific reference to President Richard Nixon and update the population figure. His analysis and insight remain timeless.)

Likewise, I don’t know how he would feel about the proliferation of Gonzo in this stifling atmosphere of repression and dread. Maybe I’m wrong. Maybe he would want Gonzo cut loose, to become egalitarian and set this world on fire. Maybe he would see each new screed as a blow against the empire.

We can only imagine. •

William McKeen will speak at GonzoFest Louisville on Saturday, July 20 on “Literary Journalism and the Birth of Gonzo.” He is the author of the gonzo biography “Outlaw Journalist” and “Hunter S. Thompson,” an earlier study of the writer. His other books include “Mile Marker Zero,” in which Thompson appears as a character, and “Highway 61, Rock and Roll is Here to Stay” and “Everybody Had an Ocean.” He teaches at Boston University and chairs its journalism department. He can be reached at: williammckeen.com.