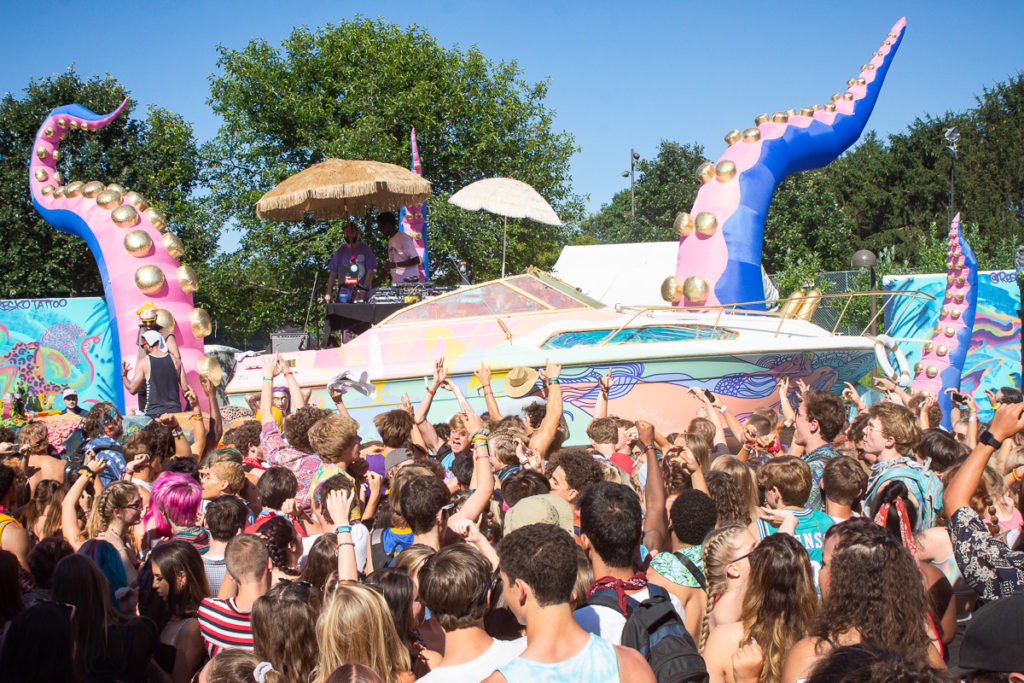 Party Cove during Platinum with 2026. | Photo By Nik Vechery.

The Other Forecastle starts under the Interstate 64 West overpass on the east end of the festival grounds. You’ll know you’ve reached it because the age range plummets from early 20s and above to what looks like the sidelines of a high school football game.

These 15- to 19-year-olds have glittery chests and open button-downs, and they greet each other with tight hugs and bro pats, excited to see each other outside of school during the summer.

The Other Forecastle includes the Ocean Stage, mostly featuring dance-y EDM and hip-hop artists. That leads into Party Cove, which is all DJs all of the time, blasting remixed pop songs from a painted yacht that’s crawling with mesmeric 20-somethings in life guard outfits and mermaid costumes, hired by Forecastle to hype up the crowd. The crowd jumps up and down together in a small pit in front of the boat, barely any space between bodies.

The Ocean Stage and Party Cove are distinctly their own spaces as are all of stages at Forecastle. But what really makes the two stages seem like their own festival is the age of those hanging out there and the atmosphere they create. Just as there seems to be a constant flow of teenagers entering Party Cove, there are always adults stumbling out of it, repelled by the number of young revelers.

“It’s like a school event. Like, you see everyone from school that you don’t get to see all the time,” said one teen, a student at the Christian Academy of Louisville. “It’s more vibey over here, and it’s more party over here.”

The music is a side note, according to Olivia Day, 17, a graduate of Eastern High School.

“I would say it definitely does not matter as much as it would at other festivals,” she said. “They more come here for pictures, and I think they see Coachella, and they’re like, ‘Well this is the closest we have to Coachella.’”

The carefully posed photos they take will end up on Instagram and Snapchat almost exclusively. No Facebook for Gen Z.

Several of the teenagers I talked to compared Forecastle to one big, high school party. And like with any party away from the parents, drinking and drugs are going to happen. Not that that doesn’t occur throughout the rest of the festival. But in Party Cove and at the Ocean Stage, the rule breakers are underage. I was told that they’ll either “pregame,” drinking or drugging before they come to the festival, or they’ll try to smuggle in alcohol under their clothes and in containers of sunscreen or other innocuous vessels. They also might try to persuade an older enabler to help a kid out. When I took a group of my friends to the outskirts of Party Cove to fill up water bottles, it took all of five minutes for a seemingly wasted teen to ask for a sip of their beer. (They refused, of course).

Forecastle’s Vice President of Strategic Partnerships Jeff Cuellar told LEO in a statement that the festival scans all IDs and issues wristbands before serving alcohol. “If someone is caught drinking underage, the festival will turn them over to the police, as it is a legal matter at that point,” he said.

Party Cove is monitored by the Louisville Metro Police Department and festival staff.

The closeness of Party Cove and Ocean Stage seems purposeful, but organizers say it’s not. The feeling of separation between the two areas and the rest of the festival isn’t intentional, said Bryan Benson, vice president of booking for AC Entertainment, the company that runs Forecastle. “It’s just, the Ocean Stage has always been there, and we put Party Cove where we have it just as a place that we found was an underutilized part of the park.”

“Obviously the Party Cove and Ocean Stage, just by the very nature of the programming, is going to attract a younger fan than maybe some of the areas,” he said.

If anything is calculated, it is that Forecastle works to create a variety of experiences within the park. Even the kids get it.

“It’s cool because it caters to everybody,” said Amani Sodhi, 18, who recently graduated from South Oldham High School. “Everybody kind of has somewhere to go.”

The Boom Stage shows more Americana artists. The WFPK Port Stage, which hosts local bands and promising indie darlings, had been near Party Cove, but organizers moved it two years ago to Kentucky Landing on the westernmost edge of the festival partly because, Benson said, they wanted a stage there. It also happened to fit with the spot’s Kentucky and local theme, he said.

At the same time, Benson said that Forecastle wants to spread out acts that appeal to young crowds throughout the festival, such as Nelly on the Boom Stage or Anderson. Paak on the main.

Still, it would be easy to finish your three-day Forecastle experience without venturing into Party Cove at all. It’d be a little harder to avoid the Ocean Stage and underpass, because they meld more fluidly with the rest of the festival, but some people manage to do it.

I found Seth Yaden, 26, and Elizabeth Perry, 28, sitting underneath a makeshift blanket fort in between sets at the front of the Boom Stage, also on the western side of the festival.

“It’s not our scene,” said Perry. “I can go listen to someone hit a button in my car.”

Instead, Yaden, Perry and Yaden’s girlfriend, Kelly Rayburn, had a tight schedule of bands they planned to see on Saturday, all at the Boom and Mast stage: Penny & Sparrow, CAAMP, Nelly and Maggie Rogers.

Some adults do find their way to Party Cove occasionally, but they often stand at the sidelines, not sure what to do: join in with getting lost in the music or stay with their kind.

Michael Bridges, 29, and Justin Mcaulay, 31, were there to hang out with a friend who was on a break from working the Party Cove bar. They stood several yards from the stage in a circle, facing away from what they called “the mob.”

“I started doing music festivals whenever I was like 20, and man, I was in there,” said Bridges, glancing over at the jumping teenagers. “It’s kind of changed as you get older. It’s a different experience now.”

“We’ve aged out of that group a little bit,” said Mcaulay.

But they can still enjoy the music.

“We’re not opposed to any of the experiences that are here,” said Mcaulay. “In terms of music, we love all genres of music.”

Because nothing is absolute, not all of teenagers chose to hang out at the Ocean Stage and Party Cove.

Skylar Boom and Destini Weddle, both 18 and freshly graduated from Eastern High School, were dressed the same as their friends who were still in high school, in crop tops and body glitter, but they stood apart from the group — across the walkway from the overpass.

When Boom first began going to Forecastle, she’d head straight to Party Cove and stay there most of the time.

“But last year,” she said. “I mostly went for the bands.”

Boom still planned to go to Party Cove on Friday, but she’d be making the journey to the other side of the festival to see Judah & The Lion, too.

And other Party Cove-goers also wanted to see artists outside of the area: Maggie Rogers was on Weddle and Boom’s list for Saturday, a North Oldham High School student said she planned to go see Chromeo on Friday and everyone was waiting to see the main act, the Killers. Because, at the end of the day (literally) the two Forecastles become exactly what its organizers say they are: one.

On Friday, the Party Cove stage shut down at 8:45 p.m. and the Ocean Stage finished off with a set from Jungle at 9:30 p.m. The Mast Stage was the only party left going. The Killers have been making music since 2001, long enough for them to have an older, OG fan base, but somehow, their 2003 song “Mr. Brightside” has managed to stay a recognizable hit, especially in the UK where it’s still a Top 100 single.

And when they closed their show with it at Forecastle, everyone, teenagers and adults, sang along.