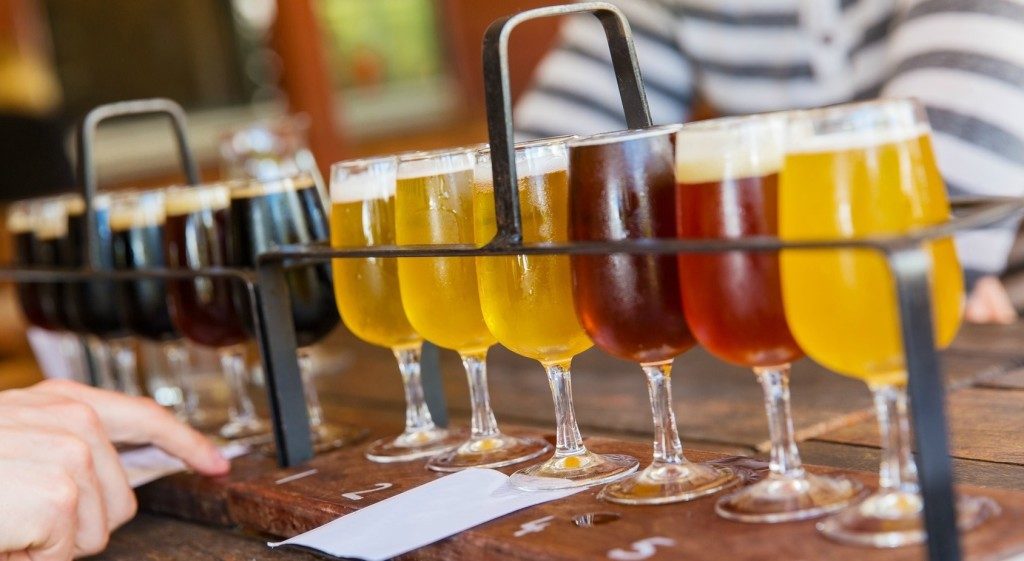 3rd Turn Brewing
Nacho Swoole’
A variation on its seasonal Fruited Kolsch Swooly, the Nacho Swoole’ brings spiced heat. Capped with a soft foam fluff, it has notes of hot peppers at the head, cut by a difficult-to-describe sweetness. You get the heat by virtue of Reaper peppers, blunted by citrus fruits — hints of pineapple and orange. This is deeply complex — equal parts sweet and savory — which makes for a rich drinking experience. It’s heavy at 7.1% ABV, but the slight burn from the peppers invites slow sips.

Against the Grain Brewery and Smokehouse
A Beer
Topped with a soft foam from the tap, this lager is a light brew clocking in at 4.5% ABV with a low 24.6 IBU, making for an easily sessionable quaff. At first blush, you pick up lightly hopped notes with a flavorful and full body end. This is a quintessential summer brew, perfect to stave off the heat after time in the sun.

Akasha Brewing Co.
No Frills
An American Pale Ale, the No Frills is exactly as advertised — simple (and delicious). What makes this beer work so well is that it has such an inviting base, a well-crafted turn on classic hops and malts. A burnt golden body greets you with a soft foam head for a handsome pour. This is a juicy brew that is easy to drink at 6% ABV. It’s thirst quenching, the kind of beer you drink take a load off, to relax after a long day. This is immensely drinkable and chill.

Apocalypse Brew Works
Green Chile Wheat
Brewed with hatch chiles, the Green Chile Wheat is an incredible representation of summer heat, a spicy ale blunted by wheat grains and sweet malts. The body is a cloudy blonde, a golden and inviting treat for warm summer days, capped with a soft foam lattice. You get the pepper notes at the head, which makes for an intriguing entrance. At 4.2% ABV, this goes down easier than you’d expect, a smooth body with a mellow mouthfeel that is far less caliente than spiced. This would pair excellently with Mexican food or chili, something hearty. What is so incredibly surprising is how refreshing this is in spite of that — carefully balanced, with a robust flavor palate.

Donum Dei Brewery
4.0 Grapefruit Pale Ale
The 4.0 Grapefruit Pale Ale is a nearly transparent light beer, with only the slightest haze to a golden body. There is virtually no head to this brew or any movement in the body of the beer, making for a still and easily drinkable quaff. You certainly catch notes of grapefruit at the head, although the body is not quite as overwhelmingly sweet as a grapefruit shandy. At 4% ABV, this is an easy brew to session drink throughout the day, a great way to cool down.

Falls City Brewing Co.
Good Times
The ginger and lime balance wonderfully for a refreshing and breezy brew ideal for quenching your thirst. The body is a translucent gold, with an almost nonexistent ring of foam. At 4.2% ABV, this is a delightful session beer, so easy to drink that you may burn through your fill before you realize it. It’s that champagne problem that haunts the beer — that it is so good that you may run out.

False Idol independent Brewers
Sober La Luna
A Mexican-style lager, the Cerveca sports a golden, translucent body with a soft foam head. This is a creamy beer with a 4.4% ABV. As such, this is a hot weather special that you queue up after toiling under the hot sun. This is a session brew, with a slight dry brut aftertaste, but a juicy, wheaty upfront pop.

Gravely Brewing Co.
The Power of One
A SMaSH Pale ale, an acronym for single malt and single hop pale, the Power of One features a deep and hazy golden blonde body, and a soft foam cap. Brewed with Azacca hops, this is a light and bright summer ale, cut nicely by the mild bitterness of the hops. Coming in at 44 IBU and a 6% ABV, the tonal palate is much more rich than you’d expect for a beer with simplicity at its core. This is thick, without being too heavy, light without being too thin, making for a unique and flavorful balance.

Great Flood Brewing Co.
Hibiscus and Wheat Saison
This hibiscus and wheat saison is a mild seasonal treat with a deep, golden, lightly-clouded body. You can catch fruited notes, with slight hints of sweetness. Capped with a light foam head, this is a delightful summer quaff, an easy 6% ABV that invites repeat visits. As such, there is a juicy finish — a fruited, almost floral taste that leaves you wanting more.

Holsopple Brewing
Stufigweizen
A barrel-aged weizenbock, the Stufigweizen has the body of a barley wine, and is sweet but not cloying.The barrel-aged notes add a sublimeness to the flavor bed, which is built on a German bock variety. While this may seem off season, it’s an extraordinary diversion to the typical summer brew styles, offering up something wholly different and colorful, without skewing so heavy that it’s too filling. At 8.1% ABV, this is a nighttime beer, to relax with under a fan while you watch the fireflies dance in the fading light.

Mile Wide Beer Co.
Quiet Science
A piña coloda gose, the Quiet Science immediately greets you with a toasted coconut and pineapple flavor, which balances well against the sourness of the gose. The body is light golden blonde, the color of wheat in a field, and capped by a delicate foam lattice. At 5% ABV, this easy to drink, and the first, in my experience, that seems like a milkshake variety of a Gose, thick and juicy. There is a lot going on in this beer, so savor the complexity.

Monnik Beer Co.
Tea for Two
A Saison brewed with Osmanthus tea, the Tea for Two is a collaborative beer brewed with 50 West from Cincinnati. It has a relatively-low 5.9% ABV, featuring spiced notes that add an inviting flavor. This continues the trend of Monnik serving some of the best saisons out there.

New Albanian Brewing Co. Pizzeria & Public House
Good Intentions
A helles lager, Good Intentions is a light beer with a heavy finish. At 6% ABV and 25 IBU, this sports a champagne-colored body with no foam on top. There isn’t much to pick up at the nose, although plenty going on in the flavor bed, with a malty front end and a wheat finish. This is a relaxing yard work beer.

Old Louisville Brewery
Eric Won’t Like This NE IPA
As the name implies, this is a Northeasten Imperial Pale Ale. At 6.8% ABV, this isn’t an especially heavy variation on the style, although it is a bit heavier than a lot of summer beers. You can catch the citrus notes of the amarillo, simcoe and citra hops at the nose, suggesting a light shandy edge to the brew. The mouthfeel is a moderate viscosity, not quite a milkshake IPA that you can almost chew on, but thicker than a lager or pilsner. This is perfect for beating the muggy heat, with a flavorful pop at the end.

Red Foot Brewing Co.
Farmhand Stipend Saison
A crisp, golden-blonde saison, the Farmhand Stipend sports a fine thin foam head. At 7.5% ABV, this is a heavy beer, with a malty sweetness, blunted by a relaxed and calming back end. Proceed with caution, although this refreshing seasonal quaff will invigorate you.