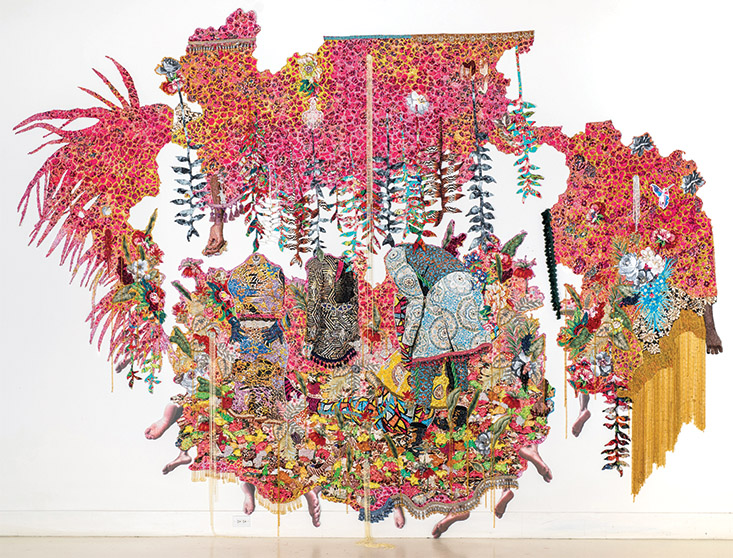 ‘...they stood in a time of unknowing ... for those who bear/bare witness.’

In an interview with Victoria Stapley-Brown for The Art Newspaper, Ebony G. Patterson replied to a question regarding the beautiful aesthetic of her works as follows:

“Oh, it’s a trap. It’s a total trap! One, it’s a trap in the sense that I’m interested in using materials [such as pearls or costume jewelery] that we associate with prettiness, as a way of luring or pulling in the viewer … the minute you start to dig beyond its beauty — is when you really begin to see that this is actually not as beautiful as it seems; there is a lot of conflation between the layers of beauty and the layers of violence. The other thing that I’m interested in is just thinking about the garden and the earth as a metaphor—the idea that we come from the earth, we exist on the earth and we return to the earth. While we live, there is this enthrallment with beauty or cultivating beauty. I’m interested in the way we use dress, and its relationship to pageantry and beauty, particularly with working-class people — how that becomes an act of gardening, but gardening that’s happening on the body.”

The transformative power of embellishment is a strong concept found throughout Patterson’s body of work. Her installation in the Speed Art Museum’s second floor of the North Gallery compiles works from 2010 to present day and is unified by the lavish environment she creates. Before entering the gallery, the sounds of birds and animals calling out beckon. The walls are covered in a repeating, patterned floral wallpaper, which has a dark blue and purple pallet. Layered on are collections of butterflies, draping, colorful florals and greenery, which are intermittently lit, suggesting moonlight. This aura of the exotic sets a mysterious and somewhat foreboding tone. Patterson’s garden is not brightly lit and tidy. It is wild, dark and unpredictable.

The first work encountered is a multimedia video piece “The Observation: The Bush Cockerel Project, A Fictitious Historical Narrative” (2012). Installed in a smaller gallery, it is a large, floor-to-ceiling triptych projection of a jungle, with the central screen depicting two birdlike costumed figures, one black and the other white, which contrast with their colorful surroundings. Filling the room are more flowers, butterflies and orbs which seem to be floating, as they are suspended from the ceiling. This is a rich, strangely magical environment.

This feeling of other-worldliness continues as a large central gallery is made to feel intimate through the continued use of the wallpaper and florals. Scattered throughout are pieces of artwork; tapestries, drawings and photos adorn the walls and the floor. Each is a dense concentration of color, imagery and symbols. Some drip with beading and others with crochet. Some clearly offer the face of a man or a grouping of people, each adorned with lace, paper flowers and gems, which serves to elevate the individual(s) from the mundane to the exceptional. Other works seem simply like abstract representations of fauna, rich with color and texture, until a figure emerges from the background. The tapestries are encrusted with glitter and beads, accessories and rich patterns. Again, the composition seems flat, ornamental and abstracted, until the foreshortened torso of a headless figure arises. In the intimate surroundings of the moonlit garden, something is awry.

Continuing on, a series of large mounds of red, yellow and white florals are set atop simple metal stands, with the center at eye level. Looking up, the tops of the mounds have flowers growing up toward sunlight. Nestled among the flora are objects made of frosted, corpse white glass; a hand with a lavish ring, a foot, a string of pearls, a small stuffed bear. These mounds connote burial, and the ground is reclaiming its own by transforming the objects and bodies of the living into soil. The embellishments are being stripped away.

A second large gallery space offers richly decorated tapestries from Patterson’s “…those who bear/bare witness series” (2018). The figures that materialize are incomplete, disembodied and damaged. The imagery has been derived from mass-consumed pictures of nameless murder victims found on the internet. By incorporating these images into the tapestries, she is recovering the victim whose death has been exploited and restoring their lost dignity and uniqueness. In a small area, suspended from the ceiling are several pairs of shoes which have been painted black and encrusted with black glitter. This piece, entitled “ …stars…” (2018) looms, like a beautiful black cloud or a mass of souls ascending.

Finally, in another small gallery is the piece “…three kings weep…” ( 2016-17). This video installation, a triptych, is somewhat stark in comparison. Patterson has limited her embellishment to what is on the large screens. Three African American men, seen from the waist up, stand in front of a bright floral background. They are slowly getting dressed in lavish clothes and jewels while crying. This video, played in reverse, is accompanied by the voice of a young person reading Claude McKay’s poem “If We Must Die” (1919). The ultimate ornamentation is the ones with which we adorn ourselves. The trio’s humanity is obscured by the roles imposed upon them, as reflected in their costuming.

Upon entering “…while the dew is still on the roses…,” Patterson’s environment is overwhelming. There is sound, texture, a riot of decoration, color and shine, despite the limited lighting. It seems fantastic. It forces closer observation in order to completely understand what is being presented. The use of the alluring topdressing draws us into the composition, asking that we take a second look. The journey through this garden begins with the fantastic and ends with the tragic. Throughout the journey, we are tricked into looking a little longer and what has been transformed. •

‘…while the dew is still on the roses…’
by Ebony G. Patterson
Through Jan. 5
The Speed Art Museum
2035 S. Third St.
speedmuseum.org
Free with general admission
Times vary