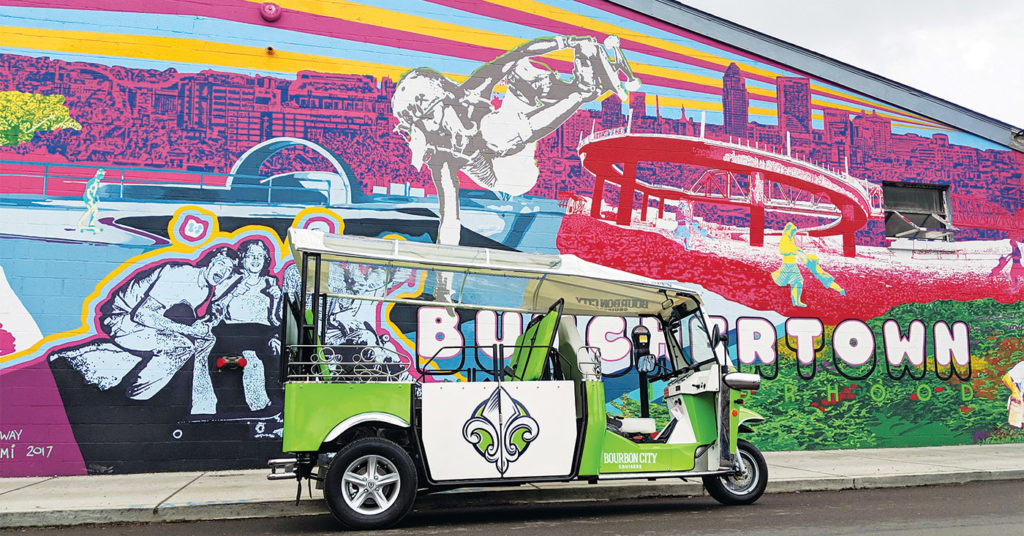 “That’s the standing ovation on the tuk-tuk,” said Thomas, who’s learned to mold his tours to the likings, energy and local experience of his crowd. It’s all about reading the room for Thomas, and when it comes to the new Mint Julep Experiences Bourbon City Cruisers, eco-friendly tuk-tuk guided tours, Thomas is a master of his craft, and BCC is ready to introduce you to its fleet, which it launched two months ago.

I was lucky enough to hop on a Bourbon City Cruisers tour recently, loading into the back of the motorized tuk-tuk (similar to those you’d see in Asia or Africa, albeit a bit swankier) with my friends, Jess Amburgey, a local photog and social media maven and Josh Johnson, social media influencer and content creator at The Kentucky Gent. It’s safe to say the three of us are well-versed in local culture, Louisville history and all things bourbon, yet we were pleasantly surprised at the history we absorbed (along with the drinks, lots of drinks). We joined Rachel Nix of BCC and Mint Julep on Thomas’ tour and buckled in for the Ultimate Urban Bourbon Cocktail Tour ($79 per person). Bourbon City Cruisers also offers a distillery cruise, during which eight distilleries are seen from the tuk-tuk, and three offer tastings, as well as a sightseeing cruise. All three are sightseeing cruises, though, and intertwine fast facts and Derby City history at every block, no matter if you’re getting boozy. We were, of course, and we set off from the Falls City Market at the Omni Hotel in style.

It was a scorching Friday evening in Louisville, but we felt a cool breeze flowing through the open-air tuk-tuk as Thomas whipped us around every corner with a new story to tell. We learned about the “Nothing New for Easter” civil rights activism at a corner on Fourth Street, about Rudell Stitch — a famous boxer from Louisville many of us haven’t heard of yet who had a promising career before he died trying to save a friend from drowning in the Ohio River. Thomas shouted out to friends by name as they meandered down the street in downtown, and they’d wave back, “Hey, Aaron!” as if he and that tuk-tuk had been weaving through their streets and telling the stories of their community for years (BCCs are very new, mind you). We learned about folks rolling bourbon barrels down the street behind Museum Row, and about the now submerged Corn Island. We had drinks on Whiskey Row and in NuLu and toasted to what a spectacular concept these cruisers really are.

Amburgey and Johnson were as impressed as I was, a consensus evident through our Instagram stories and the full-throttle dance party that ensued aboard the tuk-tuk about an hour into the tour. “It was such a unique way to see the city I thought I knew so well,” said Amburgey, “and (Aaron) delivered it with humor and a sweet playlist!” Johnson added that it educates folks “on all the things that make Louisville the special place that it is.”

“I’ve always felt I’ve grown up with the city of Louisville,” said Thomas, on why he loves being a Cruiser Captain. “Our generation got a really special place in (Louisville) history. When I was little, Waterfront Park was miles of sheet metal. Now, it’s an incredible place. From NuLu and Butchertown to how fast we’re growing… it’s like I’m showcasing a buddy I grew up with.”

Thomas says he lives for the “aha!” moment when people get blown away by our city. Whether they’re from the Bronx or the middle of nowhere in Ohio, there is always something that is going to intrigue folks about Louisville, Kentucky.

And here is Bourbon City Cruisers, maximizing everyone’s ability to do just that. Cheers! •