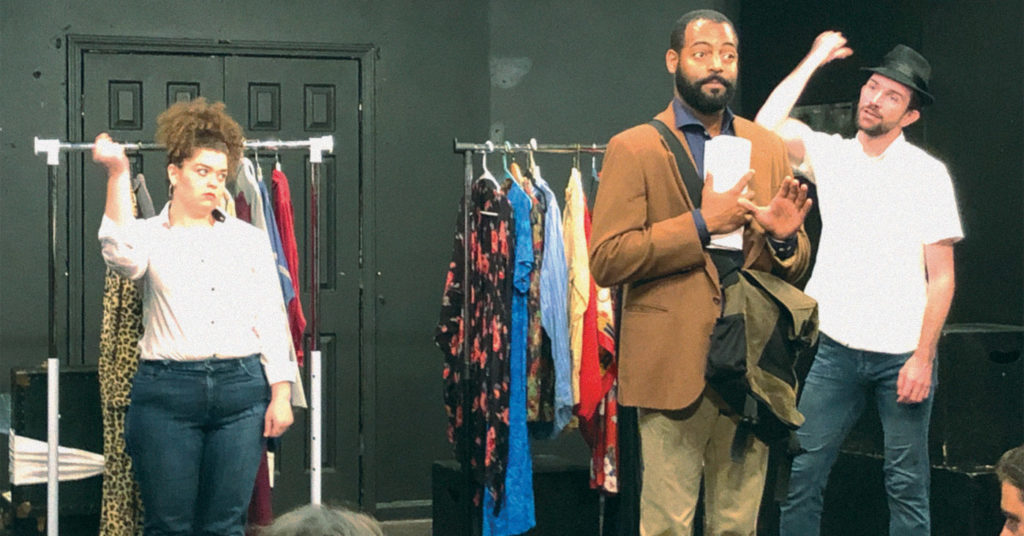 The local theater scene is about more than just the people on stage. Last weekend, I had a chance to see a showcase of some of Louisville’s talented playwrights at the fourth annual Derby City Playwrights New Play Festival.

David Clark’s “gods play,” directed by Sabrina Spalding, set the tone with a story chock full of theater meta, including a playwright protagonist (Robert Thompson), a portrayal of God (Teri Carlson) as a big shot action movie producer who wants to buy the rights to his play and a two-person Chorus (Helen Magnolia Hensley and Eric Steven Sharp) who plays all the other parts, even providing a prologue in classic form. Somewhere toward the beginning, Christopher Pentheus — the playwright — aptly calls even “four characters in the whole damn play” a “cast of thousands.”

Theater fans who have been on both sides of the curtain as well as lovers of story in general can enjoy some of the witty one-liners like, “Far from the obvious foreshadowing…” or “On an actor’s salary, really?” The Chorus even signals intermission by asking for a bathroom break and reminding God, “Our contract includes at least one, 15-minute break.”

When Pentheus, who sparks God’s ire by declaring “God himself could not write a better play,” loses the only script of his play in a plane crash, he’s more concerned with that loss than the death of 52 passengers on the plane. Even as his friends die over the course of the surreal road trip adventure, his focus remains mostly on finding a copy of the script. But his hubris and egotism is worth it for his eventual showdown with God, in which the two combat each other not physically but by furiously adding to their own scripts and changing the story in front of the audience’s eyes.

Ultimately, this show asks questions of whether art can really make a difference — and is it arrogant to try?

In “On the Road with Bernice and Robin,” Brian Walker (co-founder of Derby City Playwrights) sends a mother (Bernice, played by Kelly Kapp) and daughter (Robin, played by Abby Braune) on an epic road trip to recover a youthful piece of long-lost, zoo-related art that haunts Robin’s memory.

Their quest calls for visiting a dozen zoos — but for the widowed Bernice it’s the dark side trips that matter. She’s a disaster tourist with a yen to explore the Oklahoma City bombing, JFK’s assassination — and an adventure tour that replicates the terrors of an illegal border crossing.

In a series of deft vignettes, the trip rolls across a rugged emotional landscape filled with provocations, laughs, anger and reconciliation (and Bernice’s quest to end 15 years of libidinal frustration).

The women encounter a procession of weird men (played with mercurial uninhibited glee by Mike Price). One of those men — a delightful freedom-fighting Zoo Bandit with a knack for larceny — will help both these women find what they have lost.

This is a wonderful premise skillfully executed by Director Natalie Fields, Stage Manager Maria Allgeier (whose work definitely merits mention) and a cast whose infectious camaraderie finds the essence of Walker’s script.

“Punk Snot” comes from playwright Vidalia Unwin and Director Patrick Bias, and, on one hand, it could be a story about loss of ideals. Four friends — Zach (Fallon Crowley), Brian (Tucker Keel), Matt (Lee Stein) and “Fucking Jeff” (Spencer Korcz) — are shown at first as angry kids in 2000, punks trying to form a punk band not just to make themselves heard but to tear down the establishment and make the world better.

But after their first tour ends in disaster, the band breaks up. They come together again in 2015 to record a new album, but it’s clear that no one really wants to. Brian (now played by Corey Music) sold out and became a pop singer. Zach (Zack Stone) has gotten away from his abusive father and now finds himself in an abusive relationship with his girlfriend. He’s also joined the church, which now is much more progressive but that once refused to take him in as a runaway. Matt (Joey Eberling) has long since abandoned his toxic masculinity and bullying ways but not before losing the right to see his young daughter grow up. Jeff (Josh Rocchi) is now a drug addict, living on the streets, with a dangerous god complex.

The second act is split between the 2015 time line and flashbacks to their tour, answering the questions of what went wrong with Punk Snot and why they can’t get past what happened 10 years ago.

Everyone seems to have a different definition of “punk,” and that’s reflected in this play. Brian as a teenager always talks about “having a responsibility” to fix what’s wrong with the world as a punk, but it’s Brian who ultimately causes the most harm to his friends. Matt’s punk is shown in his nihilism, his “fuck everything” attitude, but it mainly leads to him treating his friends horribly. Jeff seems to believe that “punk” means doing the wildest thing possible for the sake of it, while Zach is the example of the hurting teenager who finds salvation in music.

One fun Easter egg in this show occurs when Matt and Zach discuss a reviewer who called them both for an interview. “Who was that? Keith Waits?” “No, not Keith Waits. Marty Rosen?” Some light ribbing of both theater writing veterans follows.

There’s one more play left in the season that I didn’t have the chance to see: Liz Fentress’s “Neutral Position,” directed by Keith McGill, about a happy couple whose relationship hits turbulence over differing stances on the death penalty. In a time where every political conflict is so extreme, what does it really mean to have a “neutral position” on an issue that’s literally life or death? Given the quality of the rest of the shows, this one’s worth checking out. •

Marty Rosen contributed to this review.