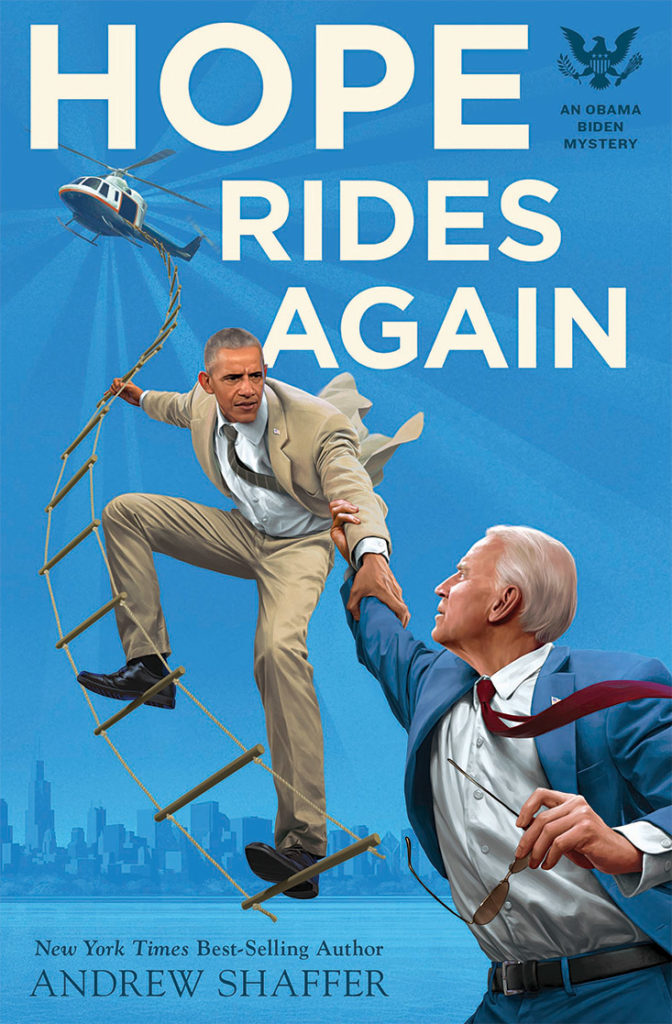 There’s lightweight, character-based humor. And there’s the absurdity of silver-haired public figures getting into a situation that requires them to behave like action heroes. Combine these, and you have a formula that’s succeeded in getting Andrew Shaffer (who now lives in Louisville) onto many top bestseller lists. Here’s the second of his “Biden-Obama mysteries” — and the author knows he’s got to work hard to keep readers engaged, as the initial novelty of his very-fresh concept is now pretty much spent.

To some degree, you do see the author sweating over the story this time around. And the post-presidency Barack Obama is a much better fleshed out character than he was in “Hope Never Dies.” Joe Biden is again the first-person narrator, maintaining what cool he can behind his Ray-Ban Aviators. But the most impressive surprise in this book is the third prominent character: It’s the city of Chicago.

Contrasting scenes set in South Side railroad yards with the urbane heights along Lake Michigan — that might’ve been expected. But Shaffer weaves in glances into Chicago’s history of shortcomings, particularly race and economy. America’s deepest and most unfortunate divisions are still here and only somewhat changed by the times. Social institutions rise up, sometimes on less-than-sturdy legs, to counter — as they always have, and again reflecting the changes of the day. Obama’s past and present keep bouncing into the story. The one-time community organizer has become a celebrity whose cred has developed differing value on the street, in the universities and behind the closed doors of power. Meanwhile, darting around at the margins, one-time Obama aide Rahm Emanuel grasps at mayoral control of a city (just concluded, in real life) that hasn’t quite left behind its old-fashioned political machinations.

Biden’s watching it all — and he’s sometimes a shrewd observer, sometimes just hokey. (When the former vice-president gets behind the wheel for what he expects to be a car chase: “It was drive-it-like-you-stole-it time. I’d never stolen anything in my life, but I had a lead foot heavier than Barack’s reading list.”) Witnessing the apparent theft of Obama’s BlackBerry gets the former vice president more of a thrilling day than he bargained for. Soon guns are out (hey, it’s Chicago after all). Can Delaware Joe handle? Once his buddy Barry is by his side, the good guys have a chance.

Practically all of the short chapters offer one or more chuckles. A favorite: Biden tumbles into an independent bookstore, and the clerk pops him across the mouth with a book. Naturally, it’s the “Marlon Bundo” children’s book, created by the family of Vice President Pence and featuring a real-life backyard bunny in the home they took over from the Bidens.

A frequent authorial ribbing is how Biden’s public persona balances a welcoming grounding with the possibility that he’s lost touch a bit. When appraising improvised public remarks from Obama: “Our old speechwriters were all podcasting now. One of these days, I was going to have to ask someone what in blue blazes a ‘podcast’ was.” This book may not age well once the 2020 campaign season goes into its next phases. But many of the politically aware may soon have nostalgic fondness for humor like this. It dares to hold gentleness as a priority. •