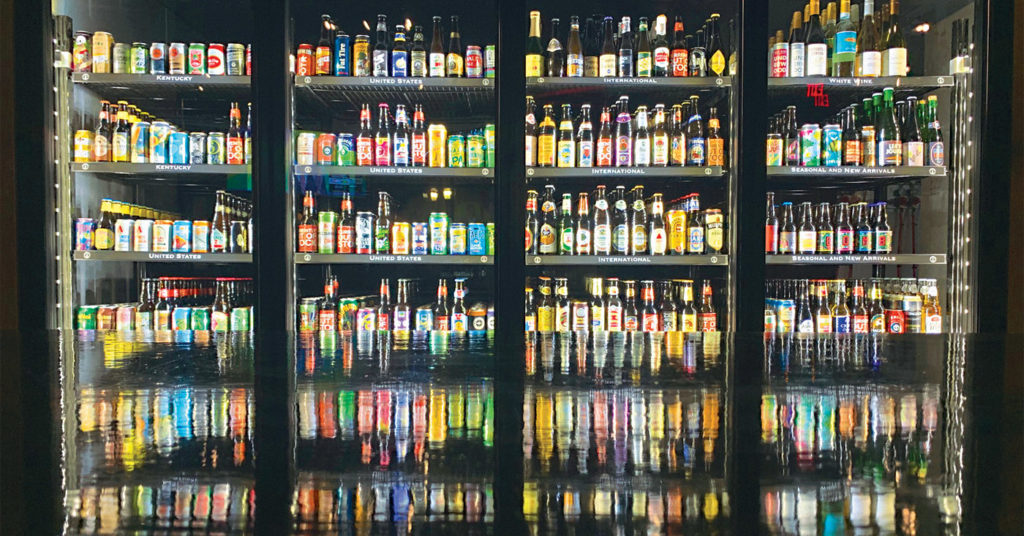 The International Tap House’s beer and can cooler.

As beer lovers who patronize restaurants almost exclusively based on their beer lists, we find few things more painful than allowing our less beer-discerning friends to decide where to eat. The last time that happened, the server told us the local craft in rotation was Blue Moon (insert “Psycho” shower scene music here).

Fortunately, even some of the best Louisville beer places can accommodate people of all imbibing proclivities. Even the holy grail of beer-geek destinations — Holy Grale — began offering a small selection of wine in the fall of 2017 (and two bourbons, served neat-only, for your friends with serious bourbon cred).

If you have trouble relinquishing your beer snobbery even for those you love most, check out these great spots that cater to both the most highfalutin hop-titioners and your whining — I mean wine-ing —  and boozing compadres.

1. The International Tap House (iTap for short) opened July 3 on Main Street. This is the fifth iTap location, but the first outside of Missouri (the first iTap opened a decade ago in St. Louis and was one of the first craft beer bars in Anheuser-Busch’s backyard not carrying AB products. Cheers!). With 45 draft beers plus 250 cans and bottles, craft beer is its emphasis. Servers have 90 days to complete their Cicerone Certified Beer Server test to ensure they understand different styles, appropriate glassware and correct pouring technique, etc.

However, with the opening of the Louisville store, bourbon is also a focus. It has 90 bourbons and plans to keep expanding. It also has five cocktails on draft, including an Old Fashioned, Negroni and Mule. Because they hire beertenders rather than bartenders, the cocktails are batch-made to ensure you get a quality product (the Old Fashioned seemed solid, but not hoppy enough for our taste). There are also eight to 10 wine offerings. And with 250 beers, your friend may even be able to find something that “doesn’t taste like beer.” “We want to be a place for everyone from beer novices to beer nerds,” said General Manager Nick Kobel.

2. 3rd Turn Brewing, which recently launched its bourbon bar Next Door in Jeffersontown, is all about community and craft. “We see ourselves as a neighborhood place where beer drinkers and non-beer drinkers feel welcome and want to hang out,” said owner-General Manager Greg Hayden. By offering bourbon, wine, slushies and cider in addition to 10 guest taps and its own house-brewed beers, 3rd Turn has something for all tastes. Hayden enjoys the challenge of helping someone who thinks they don’t like craft beer (or any beer) find a “gateway” product, and delights in hearing someone say, “This is beer? Oh, I guess I do like beer!” And, its Oldham Gardens location has partnered with local meadery Hive and Barrel and often features food and beer pairing events.

The bourbon bar, literally next door to the J-town brewery (in case the name didn’t tip you off), has 200 bourbons to choose from and also features 15 thoughtfully crafted bourbon-based cocktails, many of which are augmented by fresh ingredients grown at Oldham Gardens. A selection of 12 barrel-aged beers on draft levels up the craft game even further.

3. With 40 taps dispensing beers from 18 Kentucky breweries, Crescent Hill Craft House is a great place to feel good about yourself for drinking craft and drinking local. Sharing the beer spotlight are about 50 bourbons, as well as seasonal cocktails and eight wine choices. Bartender Jamie Davis works with his fellow bartenders and general manager to create cocktails that capitalize on seasonal ingredients and balance out the sweet with zesty garnishes (such as rosemary, cilantro and cucumber) and even some spice (such as Tajín, a Mexican chili lime salt, on the rim of the Watermelon Margarita). Oh, and don’t let your friends tread on your beer cred by ordering a domestic light. “Ninety-five percent of the time we’ll have a solid lager or pilsner on tap, or similar style they may like,” said Davis (as a last resort, it does have a secret stash of Miller Lite bottles in the cooler-of-shame).

Of course, this is not an exhaustive list. Gravely Brewing Co. offers 10 cocktails and eight wine choices in addition to its ever-changing beer selection. False Idol, The Exchange and Feast BBQ are also great options. And we can expect to see the synergy between beer, wine and bourbon continue. You’re hard-pressed to find a serious beer list these days that doesn’t include beer aged in bourbon barrels or sours aged in wine barrels (or bourbons aged in beer barrels!). Of course, it makes good business sense to be more “inclusive” in your offerings, but it can be more than that.

“Many brewers are inspired by wine, and we are inspired by our passion for craft,” said Lucy Brown, longtime beertender at Holy Grale. “Natural, biodynamic, small producers… the same things that we love about the beers we feature, we love exploring in wine, too.”

Bottom line, when your friends don’t want to be beered, and you don’t want to be bored, stay strong, beer nerds! No need to compromise your noble standards for your fuggle-duggle friends with the mosaic of options out there. *

Beer is food, but…

*If you get the relevance of the words in italics, celebrate by buying yourself a beer.