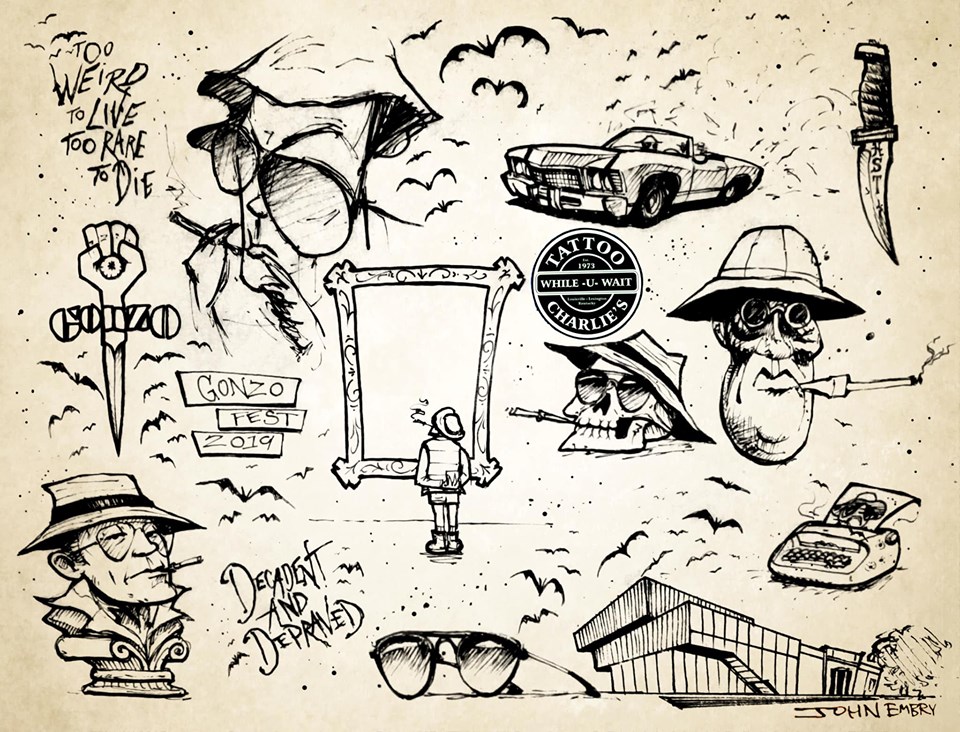 Available tattoo designs at After Hours At the Speed.

After Hours at the Speed + GonzoFest
Speed Art Museum
$20, nonmembers  |  5-10 p.m.
GonzoFest is Saturday at the Main Library, but on Friday, it’s the Speed that’s gone Gonzo. In partnership with GonzoFest (and inspired by the museum’s new Hunter S. Thompson exhibit), the museum has turned After Hours into a celebration of the famous author and his manic, brilliant writing. Get a Gonzo tattoo from Tattoo Charlies; a talk with HST’s so Juan Thompson and Thompson-inspired writers Tim Denevi and Ron Whitehead; a tour of the new exhibit with the Speed’s curator Erika Holmquist-Wall and Thompson scholar Rory Feehan; and a presentation on Gonzo-style cartoons with Bellarmine University professor Eric Roorda —  with a Thompson stand-in watching over it all with help from Squallis Puppeteers. Some not-Gonzo related activities will be music from Scott T. Smith and Brooks Ritter, as well as a screening of 2019 Sundance Film Festival shorts if you don’t mind paying a little extra. As always, there will be speciality cocktails and food.

The Moth Ball
Idlewild Butterfly Farm
$10, adults; $8, children/seniors/veterans  |  6-10 p.m.
You’re invited to the Moth Ball, where there’s no dancing or dresses, but there are lots and lots of moths (and food and drink). To celebrate National Moth Week, Idlewild Butterfly Farm is inviting the public into its Nighttime Moth House where you’ll observe moths with entomologists and moth experts and have a chance to buy moth merch. There will be food from Red Top Hotdogs and Atrium Kitchen, beer by Mile Wide Beer Co. and face painting.

A Night of Magic: Tanya Solomon and Sansa the Singing Mindreader
Zanzabar
$10  |  8 p.m.
Two accomplished female magicians with big-time credits, Tanya Solomon and Sansa Asylum, have come to Louisville to entertain with an evening of magic. Acts include live fish appearing from nowhere, blindfolded knife throwing, telekinesis, singing and dancing.

The Derby City Playwrights New Play Festival
The Bard’s Town
$18-$20  |  Times vary
Fifty-six Louisville artists. Four full-length original productions. Three readings from local writers. The Derby City Playwrights New Play Festival, which has been ongoing since July 12 and will run through July 28, features work from Louisville writers covering dark comedy and intimate drama. On Sunday, catch “Neutral Position,” about a couple whose jobs force them onto different sides of the death penalty argument and “On the Road with Bernice and Robin,” following a mother and daughter on their journey through all of America’s zoos. On Friday and Saturday, or in the coming weeks, you’ll have the chance to view other productions: “Punk Snot,” a coming-of-age story bout the “gritty world of punk rock,” “gods play,” a Greek tragedy told through an action blockbuster” and three readings, “Good Grief,” a musical, “The Devil in Clean Pressed Clothes,” a morality tale about “love, art and the selling of one’s soul and “No Cake,” a love story featuring an Indian goddess and Ireland.