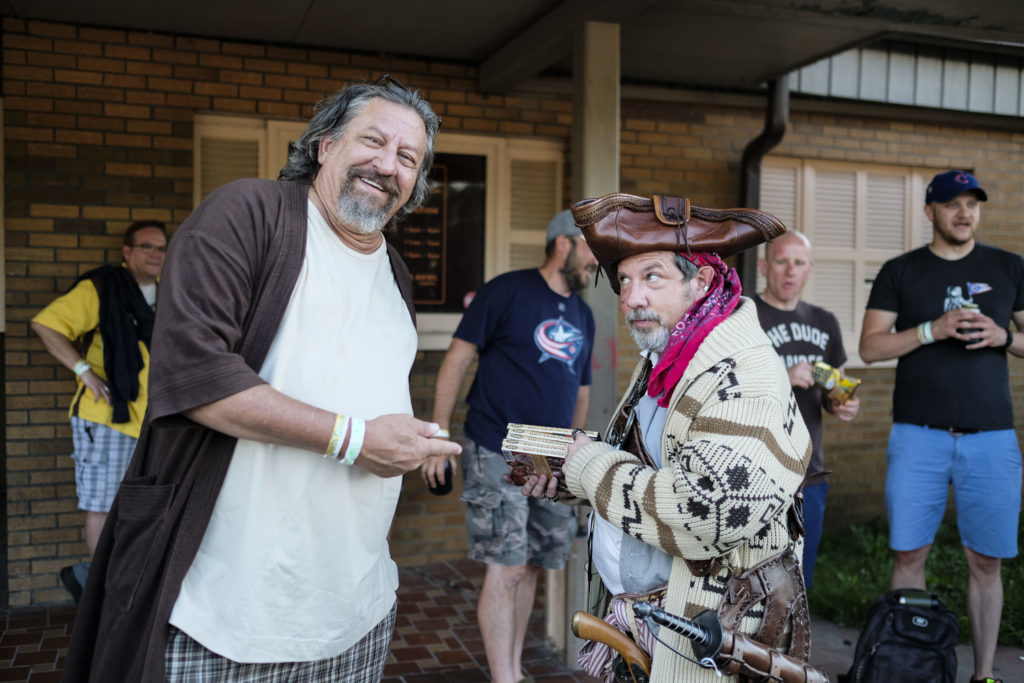 John Kovarik (left) and Brian Scoop Diehl (right) pose for a photo while waiting in line to enter Executive Strike and Spare for the 16th Annual Lebowski Fest in 2017.

Man Man w/ Rebecca Black + Ouzelum
Zanzabar
$18  |  10:30 p.m.
If you’re not going to Forecastle, the must-see musical event of this weekend is catching Rebecca Black of “Friday” infamy opening up for the experimental pop group Man Man. It turns out, Black has made some pretty good music since her decidedly-notorious debut at 13. But that’s just it. She was 13. Now, at 22, she’s totally worth seeing, and not just for the kitsch factor.

Corydon Capital Day
Downtown Square, Corydon, Indiana
Free  |  10 a.m.-6 p.m.
If you want to get out of town for Forecastle, all you need to do is drive 35 minutes to Corydon, Indiana, which is celebrating that one time, for two years in the 1800s, that the small town was the capital of the Hoosier state… before it was even an official state. If you think Corydon residents are living in the past, well, this weekend, they literally are. You can check out the activities of old-timey artisans, including a blacksmith, quilter and potter, and play 1800s-era games. There will be wagon rides, music and dancers, vendors and an outdoor food court.

18th Annual Lebowski Fest
Executive Strike & Spare
$25 per day  |  8 p.m.
Lebowski Fest starts on Friday, but the biggest event is Saturday when there’s all-you-can-bowl, trivia competitions and costumes, all to celebrate 21 years of “The Big Lebowski.” On Friday, catch a screening of the 1998 comedy and listen to music from Paul & The Tall Trees and The Deloreans, who will perform a soundtrack tribute to the Coen brothers film.

Almost Selena
Mercury Ballroom
$12  |  9 p.m.
Selena’s voice was lost forever in 1995 when the Mexican-American pop star was killed at the age of 23. But, her legend lives on, and this tribute to her music is a pitch perfect recreation of her final, sold out show at the Houston Astrodome, outfits and all.

Owsley Sundays w/ React! Panel
Speed Art Museum
Free  |  Noon-5 p.m.
The Speed Art Museum is always free on Sundays, and this week for your nonexistent admission, you’ll also get a panel on how art is the spark to important dialogue and action in your community, inspired by Ebony G. Patterson’s exhibit highlighting disenfranchised youth with intricate, neo-baroque pieces. Panelists starting at 2 p.m. are Jacqui Blue, a local singer-songwriter, Jefferson County Public Schools Chief Equity Officer John Marshall and spoken word artist Wes Tolbert with the Campaign for Black Male Achievement. In addition to touring the museum by yourself or with a docent, you can stop by the cinema for a free, 12-minute showing of “The Millstone Sewing Center,” a documentary short about seamstresses in Eastern Kentucky who made clothes for poor families using government money and Salvation Army discards.