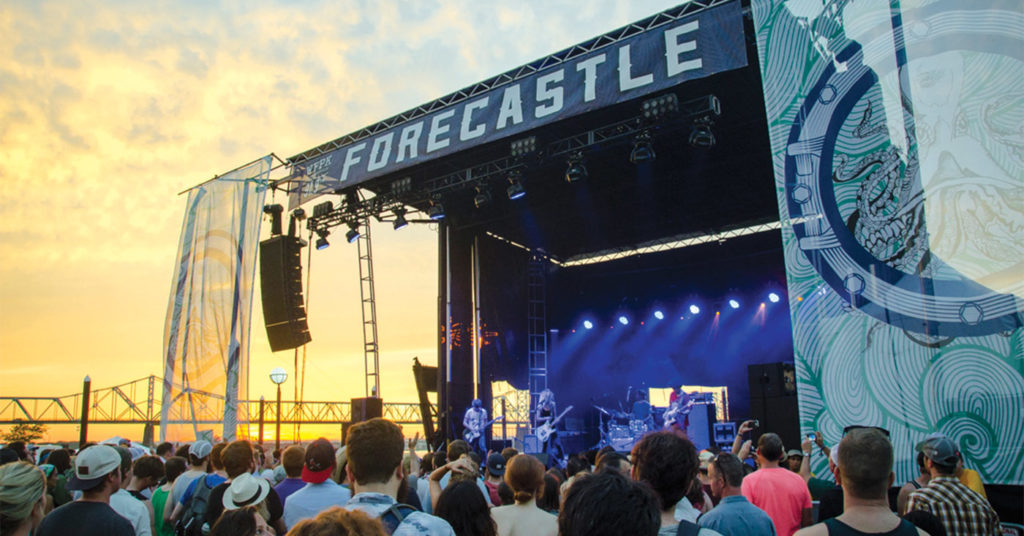 There’s always a lot happening at Forecastle: Dozens of bands on multiple stages, plus food, drinks and other entertainment scattered throughout the Great Lawn at Waterfront Park. Forecastle 2019 — which runs this weekend, Friday, July 12-14 — will mark the music festival’s 17th year. Below are 17 things that we’re looking forward to this year.

In the midst of national music acts and bourbon libations flowing at Forecastle each year, there is a smoldering of local magic that manifests at the annual set from Teddy Abrams & Friends. The curated group led by Louisville Orchestra conductor Abrams aligns a revolving cast of local musicians, pulling from every corner and genre of the city. It grows stronger each passing year as Abrams pushes his crew outside of the usual collaborations, while a lingering excitement builds for what they will bring next. The approach always shifts but never disappoints, which is why this set honoring our boundless music community is one not to miss. Teddy Abrams & Friends perform Saturday at 7:45 p.m. on the WFPK Port Stage. —Lara Kinne

Sunday of Forecastle can be tough to go to after two days of fun and sun. Getting up and being there early can be even harder, but there are three reasons to do so. Sunflower Bean will get the party started at 2 p.m. with their distorted pop prowess on the Mast Stage. Fifteen minutes later, in the shade of the WFPK Port Stage, local band Bendigo Fletcher will cool it down with their breezy folk harmonies. Stay at the WFPK Port Stage and rest for a bit in the shade: Carly Johnson will reward that patience at 3:45 p.m. with a surge of energy coming from her powerful vocals and horn-heavy jazz backing band. We’re all tired at the end of three days — you need to catch these three amazing acts. —Nik Vechery

The collaboration-minded Anderson  .Paak is pushing boundaries, modernizing soul and hip-hop with his smooth, groove-heavy style that has an activism edge. His latest album, Ventura, features guest spots from André 3000, Brandy and Nate Dogg, and he’s worked with legends such as A Tribe Called Quest in the past. He’s standing at the crossroads of where the present meets the past, and he’s beginning to cut a trail into the future. Anderson  .Paak & The Free Nationals headlines Saturday at 9:45 p.m. on the Mast Stage. —Scott Recker

If you want pours from some of Kentucky’s most celebrated distillers, The Bourbon Lodge is your place. Under the cover of a tent, The Bourbon Lodge features offerings from Blade and Bow, Bulleit, Four Roses, Larceny, Michters, Old Forester and Wilderness Trail, all serving Louisville’s native spirit neat, on the rocks, in classic cocktails and in signature cocktails. There will also be a rarities bar, featuring hard-to-find bourbons, and several tastings, which will be held all weekend long on the Lodge’s patio. Entry is $30, which includes 15 tickets, worth $1 each toward drinks. —Scott Recker

The American Poster Institute is a nonprofit organization dedicated to promoting poster art and supporting artists. This year, the API booth will feature one-of-a-kind gig posters of past performances of various bands from graphic designers. Half Hazard Press has designed and printed the official gig posters for Mandolin Orange, Billy Strings and Pigeons Playing Ping Pong. Status Serigraph is a favorite among Deadheads and beyond, who recently created posters for Jim James, the Jason Isbell and Father John Misty tour and Childish Gambino at Bonnaroo ’19. Subject Matter Studio has designed and printed gig posters for The Avett Brothers, Kings of Leon and Brett Dennen. —Julie Gross

Above the flower crowns, abstract art installations and shiny jellyfish that float through the crowds, the faces of Hunter S. Thompson and Colonel Sanders are Forecastle landmarks. Handcrafted and operated by the local nonprofit Squallis Puppeteers, Thompson and the Colonel are caricatures of the famous locals and their presence at Forecastle is, well, uniquely Louisville. They’re not hard to find as you make your way from one stage to another if you want to stop for a quick picture with the towering giants. If you’re really into Thompson and you have a Bourbon Lodge membership, stop by the Lizard Lounge — a step “into the mind of Hunter S. Thompson… an exclusive, decadent and depraved, spirit experience,” according to Forecastle. —Michelle Eigenheer

Louisville’s gourmet taqueria on wheels will be serving up delicious tacos with ingredients you wouldn’t expect. According to owner Max Balliet, the unequivocal crowd favorites is the vegetarian tofu and kimchi taco (fermented napa cabbage, crispy tofu in a gochujang sauce with chipotle mayo). And, for the meat eaters, there’s the fried chicken tacos, available three different ways: Nashville hot style with bread and butter pickles, KY style with shredded lettuce and mayo and Korean bbq style with kimchi and sesame. In addition, the co-owner of restaurant Pizza Lupo will be debuting a specialty pizza tent selling “Nonna” slices (a Sicilian pan pizza made with a generous amount of olive oil). —Julie Gross

I’m not a vegan, and I doubt I’ll ever be able to make the commitment, but I try to be a part-time abstainer of meat and dairy products. Like a 25% vegan or something. I usually eat vegan meals when I have to work the rest of the day, or be active, or otherwise don’t need a rock of meat in my stomach. And that’s where Forecastle and V-Grits co-exist well: It’s hard to eat when you’re being baked by a blistering Kentucky summer sun, but V-Grits, a vegan food truck (that now also has a brick and mortar), has a lot of solid, flavorful, comfort-food leaning options that will fill you up and not make you have to take a nap. —Scott Recker

Most music fests have after-parties and late-night shows, Forecastle uniquely hosts a few on a steamboat from the early 1900s! Docked on the Louisville Waterfront — within walking distance from the Forecastle grounds — is the grand Belle of Louisville. Friday features Montreal electro-funk duo Chromeo, which will more than likely play their hit “Must’ve Been” that will make you forget about how hot you were at the fest. Saturday features indie band Moon Taxi, and their song “Two High” will remind you of your current state of mind. Sets start at midnight. This is a separately ticketed event. —Julie Gross

Local queer punk champions GRLwood have definitely earned their slot at the Forecastle this year. Comprised of guitarist/singer Rej Forester and drummer Karen Ledford, the self-described “scream-pop” duo is one of Louisville’s hardest working bands of the last two years. But GRLwood probably wouldn’t call what they do “work,” unless it involves bashing heteronormative convictions through their music. GRLwood’s excellent album from 2018, Daddy, firmly established that opposition to outside oppressors, but the fantastic ferocity of their live performances and humorous lyrical jabs is what will inevitably draw audiences beyond the loyal cult following they’ve cultivated. GRLwood performs Friday at 3:30 p.m. on the WFPK Port Stage. — Lara Kinne

The festival app is yet to be updated and released for 2019, but having it on your phone is helpful for navigation. The app requires Bluetooth to be activated for you to receive notifications including weather alerts, band performance times (selected by the user) and food and drink promotions. Connecting your social media accounts is optional. In addition to providing a detailed festival map with GPS to show you where you are, there is a separate button for food and bourbon providing menus, descriptions and the option to write a review. —Julie Gross

Last year, Red Top Hotdogs made the jump from beloved food truck to brick-and-mortar business on Logan Street, but luckily for Forecastle junkies, the gourmet joint selling monster versions of America’s favorite summer food still maintains its vehicular roots. Pig out on classic grass-fed beef hot dogs or take a chance on pheasant sausage or vegan versions, topped with surprising yet pleasing combinations like guacamole and pico/M&M sauce or apple bacon sauerkraut and bourbon molasses — all nestled in a pillowy pretzel bun. Now you’ll have the energy to dance around to at least four more bands. —Danielle Grady

Last year, on day one of Forecastle, within a few minutes of being inside the gate, I was going to make a joke on Twitter about how I wouldn’t be satisfied with the this year’s crop of basketball jerseys until I saw someone wearing a Cedi Osman, a relatively obscure player for the Cleveland Cavaliers. As I was typing it out, a guy walked by in a Cedi Osman jersey. Not only did he save me from my lame joke, but it was also a reminder that there are few other places around where you’ll see as wide of a range of jerseys. From a high school Kobe to a college Kareem to vintage and contemporary favorites, the jersey game is strong at Forecastle. —Scott Recker

Of the four stages at Forecastle, the artists performing at the Ocean Stage tend to deliver the most surprises — think walk-on guests, funky visuals and performers jumping into the crowd. Due to the stage being beneath the overpass, it also offers the most shade, and it is here you will find the predominantly college-age crowd ready to mosh or pose for selfies. Ocean Stage is just a stone’s throw away from the mischievous Party Cove, which features DJ sets, so the ebb and flow of the crowd is breezy and, yes, glittery.
—Julie Gross

Alt-country troubadour Tyler Childers is a sharp, evocative storyteller, whose songs capture this generation of rural Americans with earnestness and truth, exploring the people and places that exist outside the national consciousness. A few years back, the Eastern Kentucky singer-songwriter told me this about his latest album, Purgatory: “I was looking for something, an accumulation of that angst of being young and not really knowing what you want to do with your life and trying to figure it out and tripping and falling and failing along the way.” Tyler Childers performs on Sunday at 7:15 p.m. on the Mast Stage.  —Scott Recker

This pick of the festival’s DJ dance party haven has been made by our future selfs, after we’ve had multiple rounds at the Gonzo Bar.