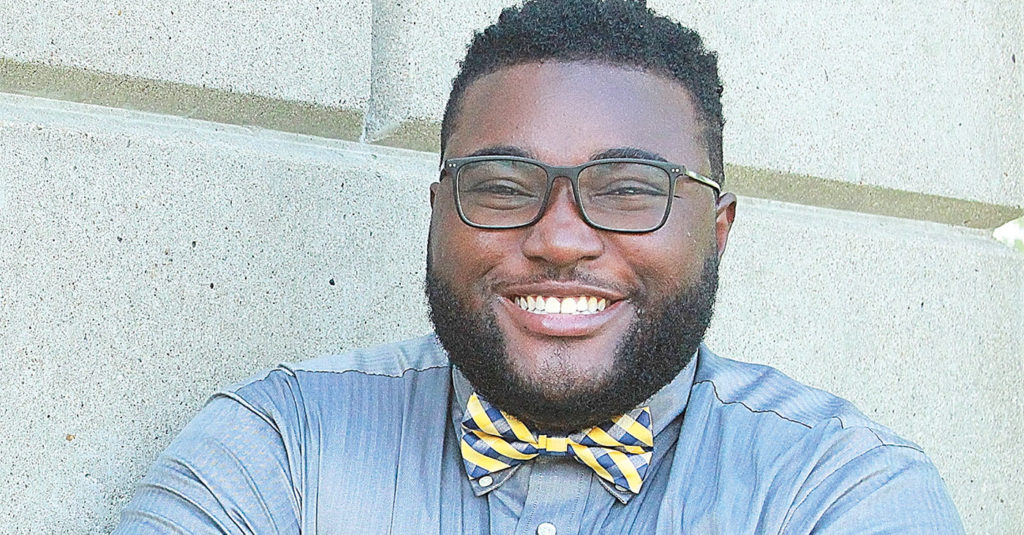 Social justice seems to be at the center of much of what Derek Guy does, whether it’s his career as a social worker for the Center for Women and Families or serving on the board of organizations such as Louisville Trans Men, Kentucky Health Justice Network and Louisville Youth Group. “I do a lot of community activist stuff in my spare time,” he said. Guy, a 27-year-old African American trans man, is from Atlanta, Georgia, and came to Louisville to complete a year of service with Americorps. He worked at Neighborhood Place in Portland before settling down here, meeting his now-wife and finding other job opportunities. And along the way, he’s stayed involved with community activism. “I really just felt like there was a need and a presence for my voice at the table because there wasn’t much diversity in organizations here in Louisville,” he said.

LEO: How would you define the term allyship?
Derek Guy: A true ally is someone who will put lives on the front line with me. I’m already such a marginalized group that I hold pretty high standards for what it looks like to be an ally. A lot of times when I put myself on the front lines, there’s a chance that I won’t return home, and I hope that allies or advocates would do the same and really be committed and passionate about what they’re fighting their cause for.

What does it mean to be on the front lines?
That means, corrective actions when you hear white colleagues or friends saying things that are discriminatory, or cisgender friends saying things that are discriminatory. That means putting yourself out there and being a voice when a lot of times people let things like that slide. It also means being out there when there are protests and counter-protests. I always appreciate seeing other friends there because usually police show up, and there is usually a sense of arresting the African American people first. A lot of my friends who happen to be white will barricade around the black activists so that [the police] don’t touch them.

Are there different levels of being an ally?
A lot of times people feel like they can only be an ally if they are going out to protest, but sometimes being an ally means having those uncomfortable conversations with your family, or giving to a cause that will need you if you may have extra monetary [assets]…that means volunteering sometimes to use your skills.

The LGBTQ community includes many identities and orientations. Do you think that LGBTQ allyship has historically been inclusive of that entire spectrum?
No, I think LGBTQ+ people actually struggle the most because they’re in a minority so they feel like they can’t be discriminatory toward other minorities. Being in Louisville, I’ve probably experienced more racism and transphobia within that community, which is ironic to say the least. Why divide within a minority? … I think a lot of times people forget how to be allies outside of their own identities.

How do you think these communities can become more inclusive?
I think it starts by first addressing your own implicit biases and figuring out what your own internal battle is with this particular diversity and addressing that first. You can’t go out and be an advocate for someone if you haven’t done the work internally. Then, it means having those uncomfortable conversations. A lot of times people in the LGTBQ+ community don’t like to talk about racism when it’s very prevalent in the community.

With it being Pride Month, there have been a lot of conversations on whether straight people should go to the Pride Parade and events. Do you think straight people should participate in these events?
I think that if they are going to participate, they should make sure they are being allies while they are there. Cultural appropriation is still a very rampant thing and oftentimes you’ll see straight people take up space in events and in venues that aren’t necessarily made for them and make it about them. Being conscious about the fact that you’re taking up space in an area that is meant for other people and doing your due diligence while you’re there. If you are seeing something that is transphobic or racist, addressing those things as a straight ally [is important].

How would you recommend allies continue to educate themselves and fight against inequalities throughout the year?
I think doing work and being conscious. African American transgender women are dying rampantly right now, and there is a sense of only remembering them in November when its trans day of remembrance… [You should put] yourself out there to be conscious of what is happening in the community outside of your own bubble and make sure you’re really addressing those things and being mindful and empathetic of the people who are most vulnerable at this intersection. People should really pay attention to what they are supporting throughout the year. Chick-Fil-A gets a huge rep of being anti-LGBT, but I’ll see straight allies or LGBT white people eating at that establishment without realizing that does more harm than good for the community… Also, not putting the marginalized voices on the line to be the ones that have to educate unless that is their job. I’m willing to educate, but [it is important to] be aware that this is free labor they are giving.

In your perspective, is Kentuckiana Pride an inclusive event?
I actually was a titleholder for Kentuckiana Pride Foundation. I was 2017 to 2018 Mr. KPF, and being a part of that system, I realized how much more harm that system was doing than help. I think it is a very monetary event. I don’t think pride should be paid for. Pride needs to be as diverse as our community is, and I think that, especially with this year being the 50th anniversary of Stonewall, there needs to be remembrance of the fact that without a black trans woman, none of this would have happened. There is a sense of Pride, especially Kentuckiana Pride, forgetting where it came from… Every grand marshal is white, that’s not representative of our community. •

[Ed. Note: The Kentuckiana Pride Foundation did not return LEO’s request for comment.]