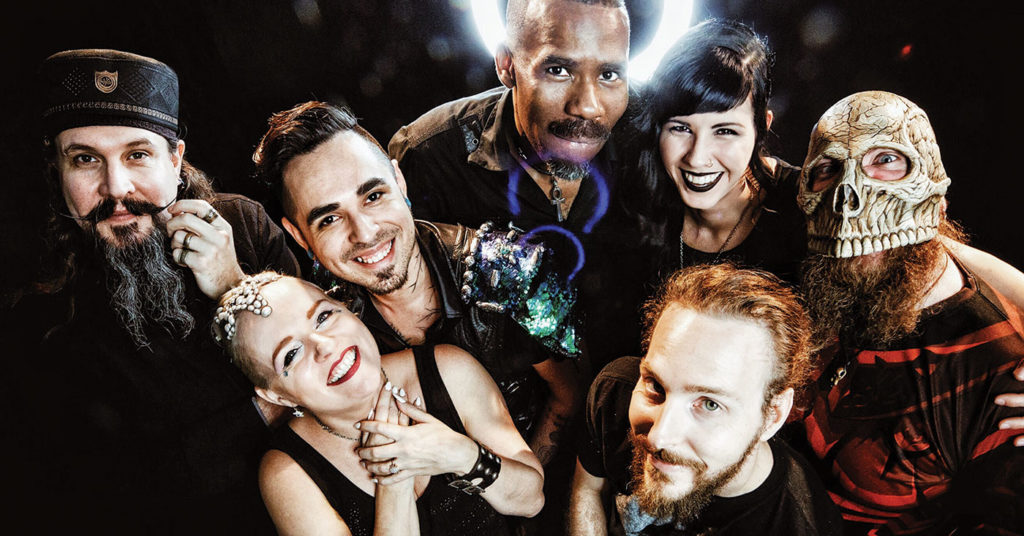 Since 2017, Shahn Rigsby and several other Louisville DJs have been using the collective Radio Arcane as a way to promote “dark eclectic music.” They do so through a series of events and concerts which focus on synthesizer-based music, hitting genres including goth, darkwave, industrial and new wave. Rigsby — who DJs under the name Motuvius Rex —  said there is a renaissance of those styles happening in Louisville. We caught up with Rigsby to find out more about Radio Arcane and what they’ve been up to.

LEO: Radio Arcane is a couple years old now, but it’s still something of an unknown entity. For people who might be curious, how would you define Radio Arcane?
Shahn Rigsby: Our tag line has been — dark eclectic music, which encompasses post-punk, darkwave music, gothic rock, new wave, synthwave. Since 2017, we’ve hosted events with DJs at Art Sanctuary, so far pretty much exclusively. We also have a podcast, which can be accessed through our website. That is radio-arcane.com. It has some descriptions in there. We keep it pretty tight as far as up to date. We also host live bands, which on the website is under the Arcane Alive! section for live music.

Are you working with anyone?
Funeral Party Records, for sure, which is Brian Cole. We are definitely tight with them. They’re a local record company. Brian is actually now part of part of Radio Arcane, as well. But that and Art Sanctuary [where most of the events are held] are the only organizations so far.

And probably one of the coolest DJ names ever.
[Laughs] Yes. Well, we used to DJ at Main Street Lounge a long time ago. But I don’t know… we got busy and jobs, and we just faded out for a while. One of our other friends, AndrOspore who’s also one of our DJs, he got with me and was actually wanting to see about starting something back up. We weren’t sure if there was even any scene for it here anymore, but it grew a little, and we got to a point where we started doing it monthly. Back in the old days, at MSL, we were able to do it weekly. But times have just changed, not only musically, but there’s just a lot more, I guess, competition — a lot more entertainment things happening today than there were 15 years ago.

You mentioned the concern about whether people are interested in this particular scene anymore. Since Radio Arcane has become more of a regular thing what kind of crowds is it drawing now?
It’s mostly been fairly steady. We were down a little bit in April when Thunder was going on. Lyft fares were like $40 to go 40 feet. [laughs] Generally, it’s been fairly consistent. We do have bigger turnouts for certain things like the annual Goth Prom we just had this past month. We’ve had good turnouts for that the last couple of years, maybe like a couple of hundred of people. It does fluctuate depending on what band is playing.

One of the cool things about Radio Arcane is that you focus a lot on local artists.
Yes. We want to promote local bands that are starting up here in Louisville. Not just host DJ events, but also push and promote and make a music scene here with acts like Scary Black, who is getting a lot of international attention, and bands like The Kentucky Vampires.

What’s the future looking like for Radio Arcane?
We definitely have plans. The podcast has started this year. We’ve been doing that monthly. It’s available on Mixcloud and SoundCloud and through our website. I think it’s helping with some more national exposure that we’re here. It’s helping us get attraction for bands that want to play here. We are planning a dark music festival sometime in 2020, hopefully. We have flirted with Convergence, which is an annual Gothic meeting convention that’s been happening for the past 25 years or so or, maybe, from city to city every year and you apply. I think the live thing is a big focus for the future. Trying to host more bands that are touring. There’s a lot of new bands, a lot of activity, a lot of things going on. I feel like it’s making a comeback. I’m 50 years old, so I’ve seen it come and go since the ‘80s. •

Radio Arcane’s DJs perform monthly at Art Sanctuary. The next show is July 13. Go to radio-arcane.com to find all of their events.