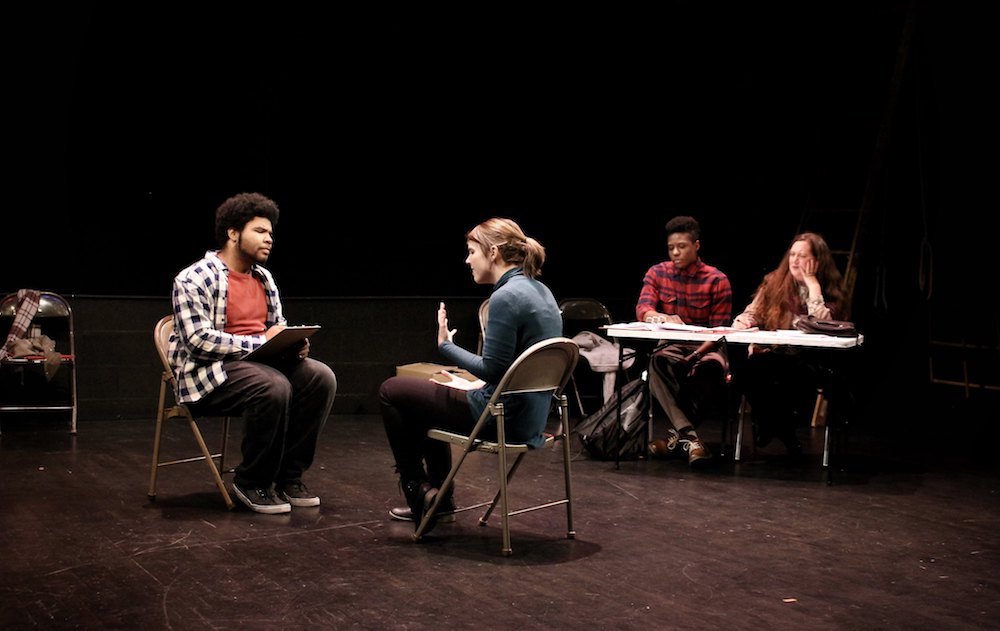 As I took my seat for Eli Keel’s “Note: A Play About Rehearsing a Play — Notes from a Bipolar Life,” (directed by Kathi E.B. Ellis), I immediately noticed the sparse set. There were only two chairs, a table and a wall-mounted coat rack in an open, black box theater layout, setting the scene for a play-within-a-play about bipolar and other mental afflictions — a delicate topic in which I am personally invested.

Addressing issues of bipolarity and other mental afflictions can be difficult. The subject matter is often dark, as it has the power to take us to the recesses of our own minds, as well as confront social issues we might normally disregard. I noticed there were tissue boxes under every few seats.

“Note” — Looking For Lilith Theatre Co.’s season-ending production — is a meta-theatrical story about performers who are rehearsing for a play while battling, and opening up about, mental health issues.

It began in complete darkness. Then, piercing through, a single light beamed down on Charlotte (Meghan Logue Holland), revealing the plays first lines and tone. She speaks about being bipolar and the thoughts running through her brain.

I was drawn in.

Another beam of light appeared, illuminating Jules (Shannon Woolley Allison), who, in the story, is the director of a one-woman show. Jules is known within the community not only for her body of work, but for her directing style. Charlotte is auditioning for the one-woman play, and Charlotte lands the part. Her big break.

Cut to next scene as we are introduced to the story’s stage manager Sam (Adama Abramson), as the first rehearsal of a five-week process begins.

Charlotte repetitively rehearses the same line for an exasperating amount of time, creating tension between characters; a format is now established cluing us into elements of reality, surrealism and the seamless molding of the two.

We have now moved into full meta, as this is play-within-a play about characters rehearsing, in search of themselves.

Progressing from scene-to-scene, “Note” never goes out of control or bashes you over the head with overtly heavy material, but rather it creates a platform and a space for hard questions — and it sets a stage for future conversations.

That said, the material goes to dark places and has heavy moments. “Note” presents conversationally taboo subjects, but when delving into that world, it never feels overwhelming, but rather welcoming.

The pacing and development works through moments of comedic relief, lightening the tone when it needs too, mixed with instances where it pushes the audience to think about the subject matter, propelling appropriate character arcs. Not only do we hear and feel the pain of Sarah, the character you never see, but only hear about, and her bipolarity, we also hear and feel the pain of people around her, such as family, friends and every-day acquaintances. We are also introduced to the perspective of people who may not know how to respond or how to approach the subject of mental illness, evident in the character Doug (Kéleb Beauchamp).

Overall this is a strong production, although I would have liked to have seen the production toward the end push a bit further, having certain characters reach more using staging — rather than relying on expository elements — to create moments mirroring aspects of the dialogue.

One of the amazing aspects of theater is being within the space, feeling the energy and raw emotion of the actors. If you relate to or know someone to whom this material pertains, go see this show. Even if you are merely curious, attend the show. Start or add to the conversation, but don’t do nothing. The point of “Note” is to open a healthy dialogue to better understand the stigma of mental illness.