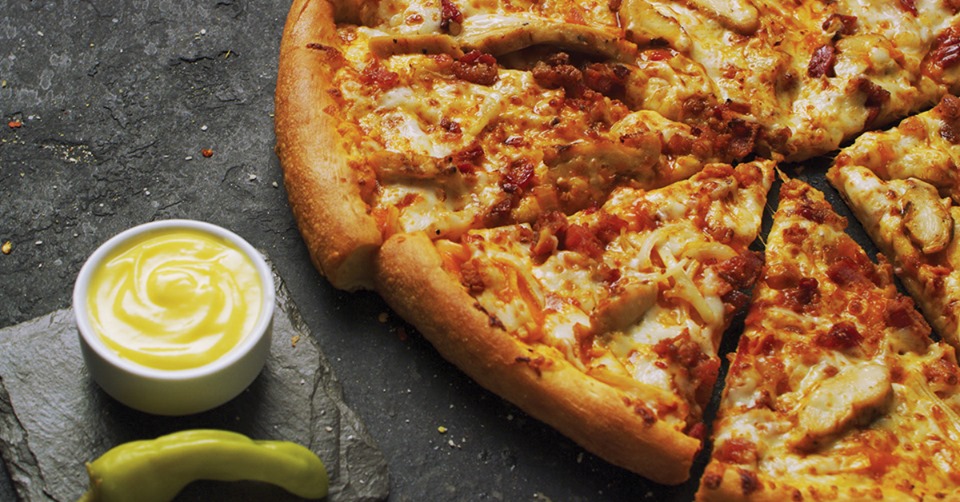 Are these merely commercial bastardizations of pizza, or are they the way pizza was meant to be?

There is no question that Louisville holds a special place in this debate, given that the city is home to Pizza Hut, by way of YUM! Brands and Papa John’s, which was born, or baked rather, across the river in Jeffersonville, Indiana. While some pizza aficionados pooh-pooh them as just the fast food equivalent of pizza, two experts told LEO that at least in some ways their pies exemplify pizza at its purest (but not the best tasting).

“I think that that boundary testing is exactly what’s so beautiful about pizza,” said Scott Wiener, the founder of Scott’s Pizza Tours in New York City and a host of “Really Dough?” a Thrillist series that explores all things pizza.

To Wiener, pizza is simply a type of bread.

“Since that’s all you need, really, for something to be a pizza, is a dough with something on it, then who’s to say that something is illegal?” he asked. “You can’t. Anything’s possible.”

Pizza expert Carol Helstosky, a University of Denver professor of history and author of the book, “Pizza: A Global History,” agrees that pizza was meant to be versatile, but she said it has to have two main elements: A pizza needs to be made using a yeasted flatbread, and most agree that the ingredients must be baked on rather than added later.

Pizza was first created in Naples, Italy, as a food for the poor, according to Helstosky. As such, its toppings were whatever the pizza maker had on hand that day — ever-changing to suit the situation.

The big chains are flexible with their pies, too, except their motivation is the customer, not the supply. When Pizza Hut and Domino’s introduced the dish to Middle America, their patrons wanted a chewier, thicker crust — so they got it. Papa John’s, which was created later — in the 1980s compared to Pizza Hut’s ‘50s — has carried on this tradition of adapting for its customers, debuting different pizza styles throughout the years.

Pizza was not a hit here immediately, but we have the chains to thank for bringing it into the mainstream.

Invented in the 18th century, it was a flatbread with tomatoes, cheese, garlic, olive oil and fish. It was much less cheesy, however, than American pizza.

“Now we see pictures, and we don’t like the look of the pizza unless we see all the cheese being pulled,” Wiener said.

In Italy, pizza wasn’t popular, either, at first. In fact, the wealthy and tourists considered it gross. “There was fish on it,” Helstosky explained. “It smelled funny.”

When Italian immigrants came to America, a pizzeria was easy to open because of low overhead. But their pies were rarely found beyond the “pizza belt,” or the Northeastern cities. That was, until the non-Italian founders of Domino’s and Pizza Hut adopted the food. They took it, first to the rest of the United States, and then they launched it globally. Wherever these pizza magnets have opened a restaurant, they’ve tried to adapt to what the locals have wanted. In the Middle East, for example, turning pizza crust into snacks, such as cheese sticks, works well for the culture, Helstosky said. Diners treat the crust as an appetizer.

Pizza chains also are true to their roots in that they’re still serving the food of the people. There have been efforts over the years to make pizza a fancy dish, Helstosky said. But Papa John’s and Pizza Hut aren’t doing this.

It’s for these reasons that pizza aficionados like Weiner can’t completely turn their backs on pizza chains, even when they’re pulling something ridiculous, like chicken and waffles pizza. “I’m all for it, as long as it tastes good,” Wiener said. “You can say all you want about chicken and waffles pizza, that it’s a violation, but part of you really wants to try it.” •