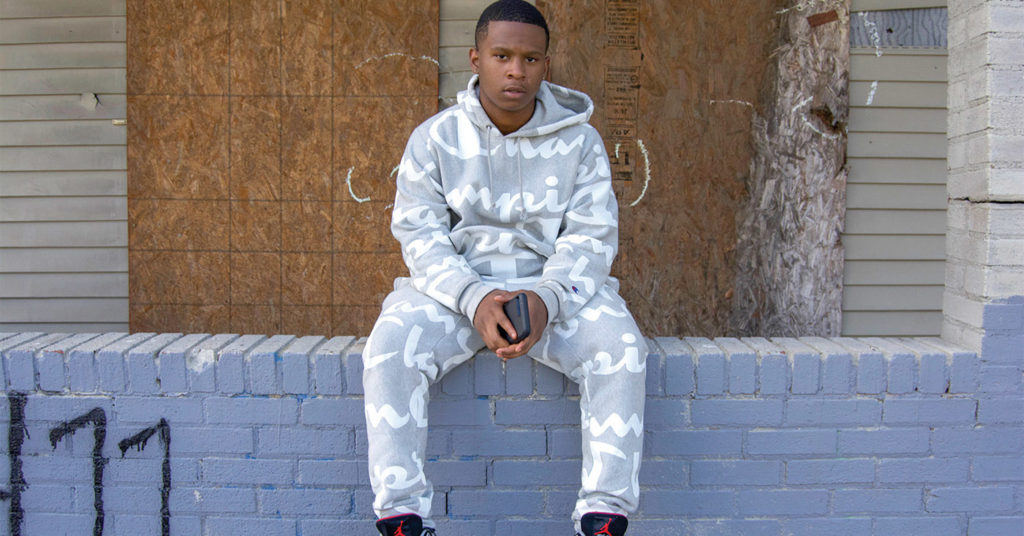 June 17, 2019
Kelvonnie, from Portland
“I’ve been down here for a few years. I lived in The East End. I grew up in Sheppard Square. My family lives down here. It can be cool but rough at times. Some people don’t have a choice when it comes to being in the streets. That’s just what it has to be because that’s all they got. Like I said, one day can be cool, and the next day can be all fucked up.

How do I deal with my struggle? I keep everything to myself. I don’t talk to anybody. When I got shit going on, I stay to myself. I just sit in the house and think about what I need to do to make it another day. Shit don’t always work out how you want it to. Ya dig? I just hope for the best at all times. If I’m in a bad situation, I really don’t down myself because it’s going to make it even worse than what it is. I always try to keep my head high, no matter what.

Doing that time opened my eyes to all the stupid shit I was doing. I was running the streets. I had to change. I realize what’s important and what’s not. I know what’s reality and what ain’t. I learned how to handle my business in a better way, instead of all that silly shit I was doing to get locked up. That was uncalled for because I chose to do some hothead stuff.

I want to own my business. Hopefully, that goes right when I get back in school. I have to go take my GED next week. I just passed my pre-test, and I plan on going to this junior college in Chicago. If I pass my test, I’ll be able to play football for them. School starts in August, so I’ll be out of here. I can get prepared and get everything on track.

Don’t give up, and I don’t care what anyone tells you: You can do whatever you want as long as you put your mind to that shit. Oh, and don’t let anyone influence you into doing some shit that you don’t wanna do.

Live your life the way you want to and the best way that you can live it. It’s only right. Take it from somebody that’s been locked up and been from pillar to post. I ran the streets and all that. That’s not where it’s at, man. Stay in school, and that’s for all the young cats. I got little brothers and sisters, so don’t think that because I’m out here, that I don’t have a heart. I love mine to death. I tell them every day to keep their head on a swivel. I used to get suspended all the time; that ain’t it. Don’t do it.” •

June 16, 2019
Silk
“The joy of being a father is being able to see yourself in them. The joy that they have and the smile on their face when you got ‘em a home and food on the table is real. That’s setting a really good example for the kids. It just brings joy to me, and it puts a smile on my face when I see them smile.

The other side of it comes with the discipline. They get mad at me, of course, because I won’t let them do this or that at one or two o’clock in the morning. For the most part, I’m happy to be here to see this. If you’re a parent, and you have an opportunity to be in your child’s life, do that, because they may not say anything about it, but it’s instilled in their head that their parent is in their life. That’s something that they’ll never forget it. They’ll never forget that you’ve been to one of their games or at their graduations.

The challenge to fatherhood is to try not to let my kids feel my pain. As a father, that doesn’t mean that we get a get-out-of-jail-free card. We got bills that have to be paid and loss of work because of an illness or something. That’s heavy on a father’s mind when he’s head of household: ‘How are we gonna get this done? How are we gonna get that done?’ I’ve been through it, and I ain’t gonna say that I haven’t. The challenge of that is to never let your kids see you break because they’re looking to you as strength. So, if you can hold that without snappin’ on them and keep being a role model, you’ll be a good parent. That’s what gets me through.

I don’t ever put no negative activity in their face. I party, have guests over and stuff, but they don’t see any of that. That’s what I do — I’m grown.” •

West of Ninth began as a photography blog, westofninth.com, by Russell residents Walt and Shae Smith. With a love for their community, Walt and Shae see the value and potential of all of West Louisville’s nine neighborhoods. Armed with a Nikon DSLR, a recorder and the ability to never meet a stranger, they work to shed light on what makes West of Ninth the greatest.