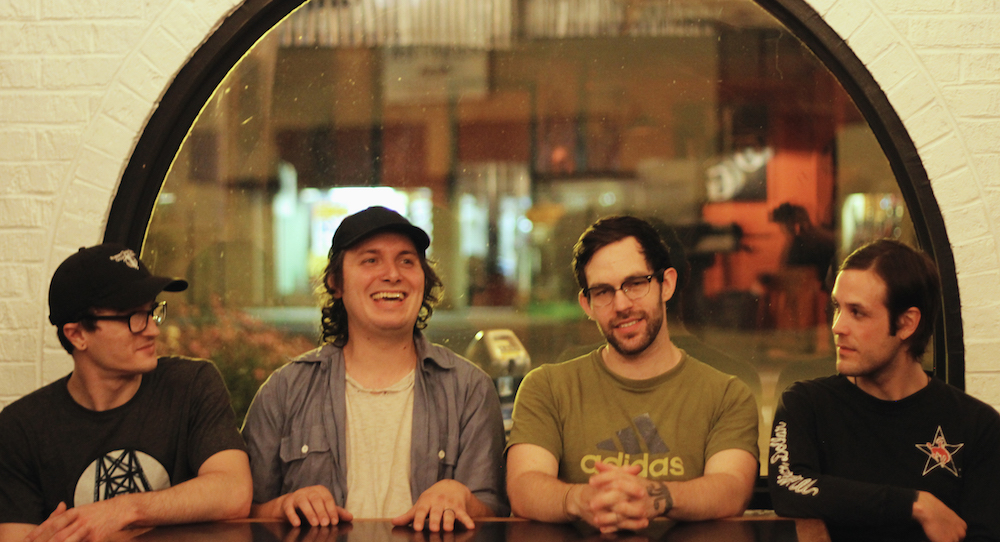 Taking a trip can serve as great inspiration for artistic creativity and for Memory Gloss’ Chyppe Crosby it was no different. “Temecula” is the tell-all of his awkward journey up from the border of Mexico with his significant other, succinctly wrapped up in a rocking, three-minute dose of post-hardcore pop filled with jangly guitars, group vocals and earnest emotion.

“About seven years ago, I was hiking in a really pretty mountain town called Idyllwild,” Crosby said. “I had come all the way from Mexico through the desert and San Jacinto Mountains to get there. It’s where Michael J. Fox’s vacation home is. One night, I met a dude who called himself Bones. We were sitting around a campfire, and he played ‘Wagon Wheel’ on the ukulele, which was annoying, but not as annoying as sleeping with my girlfriend, which he also did.” Crosby laughs. “Actually though, in spite of all this, we went on to be friends for years after. She wrote most of the lyrics on the first Memory Gloss album.”

Crosby wrote “Temecula” as both a companion piece and as a retort to a song from their first album called “Normal Storm.” In that song Crosby sings about the particular night of the incident from the woman’s perspective — which was written by his former girlfriend — while “Temecula” recounts what happened the day after.

“The next morning, we came to a quick decision to part ways,” Crosby said. “But both of us had to get to the nearest airport, which was about 200 miles away. So we hitchhiked together and ended up in Temecula, a barren, dried-up sea of dudes in plaid shorts. Strip malls as far as the eye could see in the middle of the desert. So we’re walking across this town, saying as little as possible to each other all day.  When she finally talked, I thought ‘Oh, great, maybe we can talk about everything that happened, maybe we can come to some sort of understanding.’ But she just wanted to remind me that I needed to return the $7 digital watch she bought for the trip.”

Crosby immediately got to work translating his feelings into musical form, composing the main riff the same day he returned to Louisville, although he eventually shelved the idea. When the band started writing new material last fall, he decided to finish the story he’d started seven years earlier.

“As soon as I got back, I hit up an old friend,” Crosby said. “I’d been living in San Francisco for a couple years prior to that trip, so it was like ‘Surprise, I’m back, let’s hang!’ I came up with what would become the main riff for the song that afternoon, and for some reason, didn’t touch it again for years. And, so, last fall when we were writing new material, I remembered the riff. It came together fairly quickly, over two or three practices, with everyone collaborating on the arrangement, structure, dynamics. Since this song got its beginning literally the day I moved back to Louisville, I knew that’s what I wanted to write about: reluctantly moving home after that experience.” •