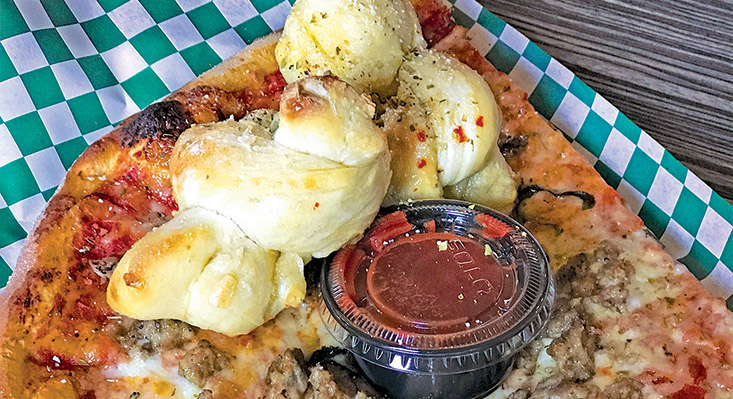 An oversize slice topped with house-made sausage and a couple of garlic knots at Butchertown Pizza Hall.

New York has thin-crust, mammoth slices of pizzas with a light layer of sauce and full-fat mozzarella cheese. Chicago has deep dish pizza with generous helpings of cheese and toppings. Louisville has… what does Louisville have?

Some have described our style as featuring semi-thick crust, spicy marinara sauce and a lot of cheese and meats.

But while it’s somewhat of an established local concept, with multiple restaurants over the years claiming to make it, does anyone outside of Louisville know what it is?

Two pizza experts have barely heard of it.

Scott Wiener, the founder of Scott’s Pizza Tours in New York City and the cohost of the Thrillist series “Really Dough?” didn’t know what it was.

And Carol Helstosky, a University of Denver professor of history and author of “Pizza: A Global History,” knew about it only from a passing comment but couldn’t describe it.

Because of that, they’re skeptical that Louisville style is really a style at all.

“I just have strong feelings about what you should and should not call a regional style,” said Wiener,

So strong are his feelings that Wiener penned a “manifesto” about the trend of regional styles for Pizza Today (a pizza trade publication that happens to be headquartered in Louisville). He wrote that a regional style must possess most of five traits to be considered as such: regional specificity (an ingredient, technology or something linked to a local culture), differentiation (a truly unique style not seen in other areas — thin crust alone doesn’t count), multiplicity (a presence in multiple pizzerias under different ownership), endurance (an existence of over 10 years) and external reference (outsiders must know about it and replicate it).

So, let’s apply his checklist to some of our local favorites.

At least two Louisville pizza restaurants claim on their website that they’ve made Louisville-style pizza for their entire existence: Bearno’s, founded in 1977 and The Original Impellizzeri’s Pizza, created in 1979 — making Wiener’s trait of “endurance” a given.

As for “differentiation,” The Original Impellizzeri’s describes Louisville style as being baked with two layers of toppings and two layers of cheese. Bearno’s cites no such formula.

It’s not clear whether the style was inspired by a particular Louisville idiosyncrasy, which would give it “regional specificity.” But two pizza experts have hardly heard of the style, so there goes “external reference.”

Certainly, cities have specific pizza styles that simply have not caught on across the country.

St. Louis-style pizza, Helstosky said, is distinct with its cracker-thin crust, but it’s not as popular outside of the Missouri city.

Louisville style might reflect a Tale of Two Pizzerias that Wiener has seen play out in other cities: A restaurant owner claims to have invented a regional style of pizza, but either no other restaurants follow their example, or the ones that do don’t make similar enough pizzas.

In the end, though, whether a pizza is part of a regional style is subjective, a tenuous description that most people don’t care to have when they’re hankering for a slice.

Helstosky said pizza history often lacks quality documentation about all aspects of the dish, including what makes it a regional style. In addition, styles change over time with different ingredients and preparation techniques.

A pizza fan might care that the slice they’re eating is unique to an area, but for most people, Helstosky isn’t sure it matters.

“Pizza is really about creativity and less about boundaries,” she said. •