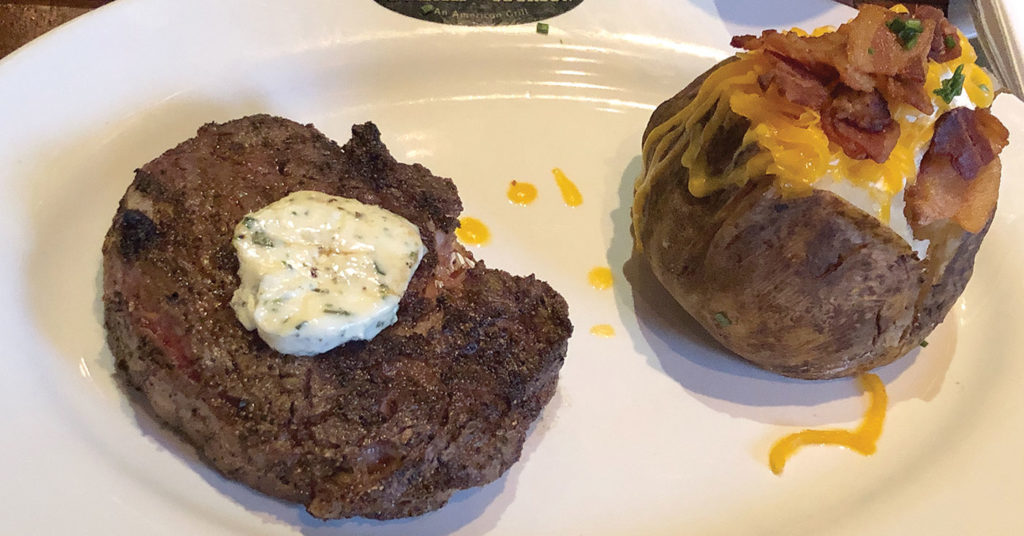 I’m not going to lie: I miss Artesano. It was a favorite. This does not mean that I don’t like Steak & Bourbon, its recent successor under the same management. But steakhouses are a dime a dozen around here. Serious Spanish tapas eateries are thin on the ground, so the loss of a favorite is a significant hit.

If you were a fan of Artesano, you’ll be happy to know that the look of the establishment hasn’t changed dramatically since the changeover last month, and Artesano’s service and kitchen staffs, including Executive Chef Jason Smith, remain in place. Subtle changes in decor add a touch of classic steakhouse look and feel. A gallery of black-and-white photos of ‘60s-era celebs, historic shots and other memorabilia now cover the walls, but a couple of Artesano’s old bull head statues remain. An open kitchen with a wood-burning fireplace and a long bar well stocked with bourbon flank the main dining room.

All my whining won’t bring Artesano back, I know, so let’s move on. We dropped into Steak & Bourbon with a group of friends the other night and had a fine time.

The menu is not overly long, but it covers the steakhouse basics. Thirteen appetizers, soups and salads start at $10 (for a brace of steak and cheese hand pies in puff pastry, which I highly recommend, or spinach and artichoke dip and most of the salads). Or you can kick off your meal at a higher price with a $16 bowl of yellowfin tuna poke or a $20 steak tenderloin medallion salad.

Steaks are Certified Angus Beef aged at least 21 days, served with your choice of spud (potato-based side). Six steak options range from $25 (for steak and frites) to $49 (for a 24-ounce bone-in cowboy cut). Four burgers (OK, one of them is a crab cake burger) are $15 to $18 and, if you’d really rather have something other than steak, a short list of other entrées includes pan-roasted chicken ($24), verlasso salmon ($30), short rib pot roast ($25) and seared sashimi grade tuna ($19).

An impressive array of bourbon makes an impressive display behind the bar. I counted 70 bourbons on the drinks menu, clustered in price between $8 and $16 for a shot; one is also invited to summon the reserve bourbon list, although I didn’t dare. A half-dozen, three-taste bourbon flights are on offer from $15 to $21, and there’s also an interesting wine list, a short beer list and a selection of cocktails to choose from. We sipped tall, refreshing drinks: a mojito ($9) made with Marti Plata Panamanian rum and a 1792 bourbon punch ($11) and fashioned from a fruity mix of booze with grapefruit juice, sweet vermouth, grenadine, lemon and cherries.

An heirloom tomato and burrata salad ($12) looked beautiful, a long plate lined up with big chunks of pale-pink tomato slathered with the creamy innards of burrata cheese, mozzarella’s more portly brother, and covered with halved red and yellow grape tomatoes, torn fresh basil leaves and a drizzle of olive oil and aged balsamic. This all looked great, but the tomatoes were hard, pale, flavorless, out-of-season fruit. Let’s hold this one until ripe and juicy local tomatoes arrive next month.

Striving for economy, we chose the smallest and most affordable steak option — steak and frites ($25). It came out well on the raw side of the medium-rare that we ordered, with a seared exterior and bleeding, sushi-grade interior. Not that I’m complaining, but we weren’t excited about gristly bits and fat. A thick, peppery sauce au poivre came alongside. Frites were thin-cut, salty and crisply fried.

Our friend Dan said his 14-ounce rib eye steak ($34) was marred by a lot of gristle and other inedible bits, and its spice rub didn’t penetrate the meat. Nevertheless, he enjoyed the flavorful steak.

Sides of thick, crisp-tender maple glazed carrots and raclette cheese-covered fingerling potatoes ($7 each) were fine; creamed spinach, a steakhouse classic, was seared too long under the broiler and, sadly, overcooked.

A golden square of bourbon bread pudding ($10) was topped with mixed berries and a purple flower. A small scoop of rich vanilla ice cream and a serving pitcher of white sauce came alongside.

Our tab for two came to $88, plus a 20% tip built in for parties of six or more; I added another $5 for our server, Jessica, who managed to be both attentive and unobtrusive in spite of plenty of tables to keep her busy.

Noise level: The room was filled, making it difficult to converse past your immediate neighbor. (The average sound level was 82 decibels, the sound of loud singing, with peaks to 90 decibels, the sound of a motorcycle.)
Accessibility: The restaurant and the restrooms are accessible to wheelchair users, but much of the seating is in booths, so wheelchair users might ask for a table with chairs that can be moved out of the way.