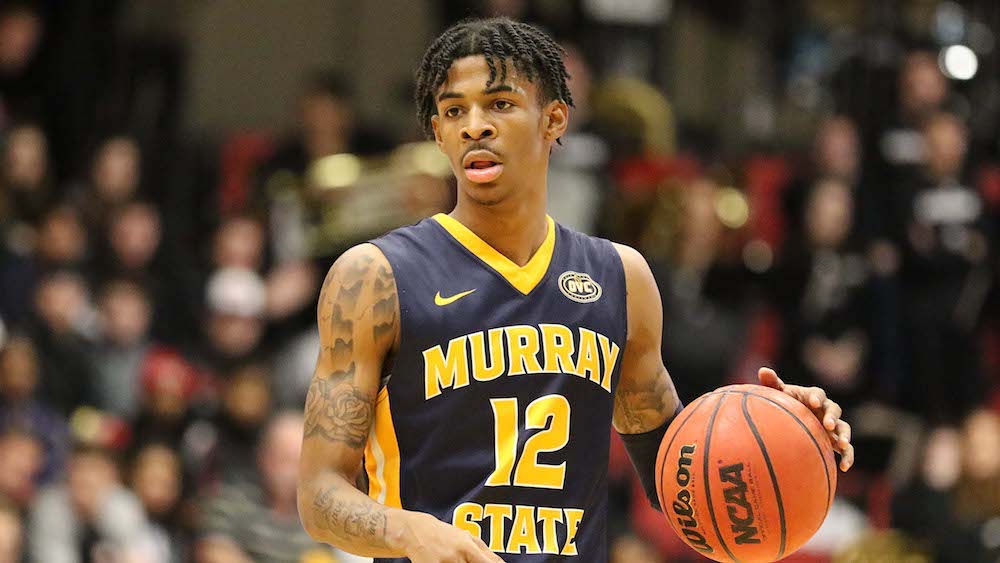 Although 2018-19 yielded no Final Fours and no titles for Bluegrass schools or Kentuckiana prospects, it did manage to provide us with some names to potentially root for in the NBA going forward. Now’s a great time to check in on those souls who’ve decided to keep their names in the NBA Draft.

If not for the literal and figurative overpowering presence of Zion Williamson, Ja Morant would have been the story of college basketball in 2019 — aside from the rampant cheating caught on wiretaps. He went from off-the-radar to a consensus top three pick in a matter of months. His buzz was enough to motivate Magic Johnson to trek to Evansville, Indiana, on a Saturday night, which is a colossal achievement.

No player in college basketball carried more of an offensive load than Morant did for Murray State. He led the country with 10 assists per game and averaged 24.5 points, leading Murray State to the second round of the NCAA Tournament after an electric, arguably historic performance against Marquette.

Morant has a wide spectrum of possible outcomes. He could ascend as high as all-star, but I don’t expect him to be a bust. His playmaking and flair for sharing the ball are peerless in this draft, and his athleticism at his position would put him in the top tier of the NBA. He’s perpetually a highlight waiting to happen. I expect him to be a starter quality player for awhile and possibly more.

STRENGTHS: Size and wingspan (6’10.5’’) for a wing, offensive IQ, feel.
WEAKNESSES: Effectiveness without the ball, explosiveness, efficiency seemingly across the board.
WHERE HE’LL BE PICKED: Late lottery to mid-first round.

Langford’s been on the NBA radar for a long time, and we’ve swung back and forth between him being extremely hyped, picked apart during a brutal season at IU and now potentially a bit underrated. One of the more popular and speculated Louisville-area players (I know he’s from New Albany, guys. Chill.), he spent a single turbulent season of college basketball at Indiana. Although he battled a ligament tear in his hand for a lot of the year, Langford still managed a respectable per game output, averaging 16.5 points, 5.4 rebounds and 2.3 assists.

Langford is a smooth, prototypically built wing for today’s NBA, and his skill set is more well-rounded than I think people might realize. He’s much more of an angular, shifty scorer than an explosive one, and his pace of play is deliberate. If you’re skilled enough, you can more than survive in the NBA as a less-than-stunning athlete, but it does require you to have exceptional ball skills, IQ and patience. To me, Langford is intriguing as a possible secondary playmaker, because the more of those types of players you can get on the floor, the harder you are to guard as a team. He is skilled enough at his size to round into a nice rotation-level player with development.

Langford’s slip into the projected late lottery could prove to be a blessing, as burning a top five pick on him — as questionable as he is at this point — is a fairly nauseating idea. Taking him eight to 10 spots later is a much more reasonable gamble, and one that could pay off. In that range, Langford could land in a situation that’s less high pressure and more ideal for him to develop at a pace that’s comfortable.

STRENGTHS: Versatile scorer with shot mobility beyond the three-point line, big-moment player, potential to grow as a pick-and-roll ball handler.
WEAKNESSES: Below average measurements for an NBA wing, could struggle to exploit angles, will be targeted defensively.
WHERE HE’LL BE PICKED: Late first round.

This past season was a slow grieving process for those fans who relish the idea of players sticking around for more than a season, and as 2018-19 unfolded, you heard more and more resigned BBN voices saying, “He’s definitely leaving.” Herro’s a swaggy guy and someone who seems to relish a challenge. He loved road game environments, to the point that I attempted to nickname him “Tyler Herroad.” I cannot fully emphasize just how much it did not catch on.

Herroad (one last try) came up huge against Louisville, seemingly making every big play on the road against Auburn and when the Cats were Tom Petty-style stood up at the gates of hell against Houston in the closing seconds of the Sweet 16, he hit the biggest shot of the season and looked totally unfazed. Sadly, you can’t cash in college glory for NBA staying power.

Herro’s reputation is as a shooter, but he did a lot this season to diversify that idea, at times appearing to be Kentucky’s most reliable all-around shot creator, and accepting premium defensive challenges throughout. He’s got decent size at 6 feet 5 inches but below average athleticism for a wing and a negative wingspan.

If you’re like some of the people I encounter in this area, you might say, “Well they don’t defend in the NBA anyway!” If you think that, my advice to you going forward would be to keep that to yourself, so you can avoid sounding like an idiot. Defending and finishing in the NBA, for Herro, will be a career-long slog. Players that function in his mold typically have something to lean on: great size, great athleticism, otherworldly ball skills. I’m on the fence about Herro’s ability to really pop in the NBA, but I’d love to be wrong.

After testing the waters in the 2018 NBA Draft and ultimately deciding to return to school, Washington got a lot of specific feedback to focus on for his development during his sophomore campaign, and it seems to have paid off. Even though he only played a little less than two more minutes per game as opposed to a season ago, Washington improved in nearly every statistical category, most noticeably upping his attempts from three (0.6 to 2.2) and nearly doubling his percentage (24% in 2017-18 to 42% in 2018-19). Heading into the season, it was widely thought that Keldon Johnson was the prized prospect on Kentucky’s roster, but by the early goings of 2019, Washington had swung that discussion in his direction.

While counting stats are fun to point to and draw conclusions, Washington’s inconsistent motor gradually evened out as the season went along. This critique was a year-long media talking-point for John Calipari. Washington projects as a rotation-level player in the NBA, and if he can ever learn to create in the space between his spot-up shooting and his scoring on the block, he could be a serious contributor and a starter in the league.

STRENGTHS: Motor, catch-and-shoot floor spacing, fearless big-game mentality.
WEAKNESSES: Consistency of defensive focus, finishing and creating for others in the middle of the floor, average measurables for a modern NBA wing.
WHERE HE’LL BE PICKED: Mid-to-late first round.

Johnson made an immediate impression on me when I got to see him in person — major brag incoming — during Kentucky’s four-game Bahamas trip. He was animated, talking through the entire pregame to anyone who would listen and very frequently making me laugh at how intensely engaged he was. His reputation in that sense and his calling card both failed to inspire a ton of enthusiasm as the season progressed, though, for a variety of reasons.

My hypothesis is that maturity will do wonders for Johnson’s consistency, but his defensive IQ, lack of elasticity and ambidextrousness as a finisher will hurt him at the next level. I think it’s safe to say that, purely as an athlete, he was misrepresented coming into UK. Although he revs his engine as if he’s a Ferrari, he’s built more like a Dodge Challenger. That is, not bad at all, but perhaps a bit less remarkable than we were led to believe.

There were times where it seemed that Johnson was the only guy unafraid of the moment for Kentucky, but there were also times where it seemed like he’d gotten so worked up that he totally neutralized himself. If he can become a versatile shot creator and hang his hat on being a switchable defensive piece, Johnson could find a great environment to develop with a competitive team based on where he’s expected to be picked. Like Langford, in a way you could argue that this would be a preferable outcome for him. I was an original loud-mouthed member of the Keldon Johnson bandwagon, but today I find myself content with the idea that he’ll likely be a second-unit guy who could hang around in the margins of the NBA without ever really making a splash.