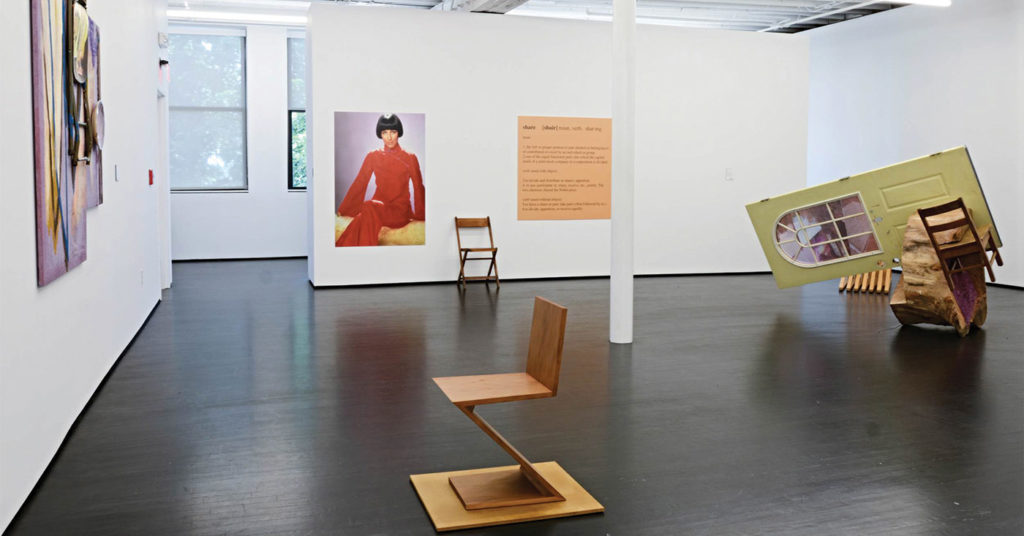 ‘In The Hot Seat’ at KMAC Museum.

“In The Hot Seat” is KMAC Museum’s most recent exhibition to highlight objects and ideas that exist between areas of easy categorization and to showcase the unique strengths of these liminal objects. In this case, “the chair” is deftly shown to be a near infinite lens through which to view ourselves — in part because of its ability to move fluidly across originating fields and disciplines. The exhibition description reads: “For designers, it is a primary object for interpreting the intersection of function and aesthetics. In contemporary artistic practice, it has become an indelible focus of creative inquiry…” “In The Hot Seat” explores this spectrum through a surprisingly large collection of chairs, chair-like objects, video and images, all of which fill the exhibition space to the brim. The second-floor gallery this summer delivers wide intrigue for those who are interested in the ways categorization (design, fashion, art) expands, constricts and warps our perspectives on objects and ourselves.

Heard before being seen, Glenn Kaino’s “The Siege Perilous” (2003) features a large office swivel chair inside of a Plexiglas cage. Around every 60 seconds, the chair is activated by a motor which spins it at several revolutions a second. While stationary, “The Siege Perilous” is just an office chair — the kind that nearly any visitor has seen before, if not sat in. This direct sourcing from reality (the chair itself), initially places it within a framework of designed-product. From here, we have a clear set of expectations about how this object should behave and perform. While spinning, however, the object becomes something otherworldly — mechanically separated from reality, it acts as an autonomous art gesture. Were “The Siege Perilous” always spinning, its recognizable features lost in a motion blur, its identity as a chair would be secondary. Instead, the chair occasionally slows to a stop, revealing its plural and ordinary self. This suspends “The Siege Perilous” somewhere between art and design. Its didactic text reads, “Kaino’s works aim to reconcile conflicting ideologies, opposing systems and strict dichotomies in material and experiential ways… and to incite, even if only temporarily, other ways of being and knowing in the world.”

This blending of perspectives happens dynamically and nonhierarchically throughout “In The Hot Seat.” If Kaino combines design and art, then Simon Starling’s “A Zig-Zag Chair” (2015) combines design with craft material interest. Here, the Gerrit Rietveld design from the 1930s is newly rendered in “45,910-year-old swamp kauri wood.” At first glance, the material description feels like a joke, as the resulting object looks similar enough to its original elm composition. As the reality of its origins sets in, however, Starling’s chair manages to marry a ubiquitous mass production design with a rare material that approaches being completely unimaginable. The gesture of replacing one material with another is simple, yet manages to represent natural forces that are several times older than our earliest civilizations, asking us to decide for ourselves if we value more the what or the how of such an object.

The success of “In The Hot Seat”comes, in part, from the strength of its individual works — “A Zig-Zag Chair” is a narrative object so improbable and provocative as to deserve its own show altogether. Yet, the exhibition demonstrates a mastery of its own conceit through the way the individual works operate together. KMAC Museum — and Curator Joey Yates — excel at this kind of exhibit: one that is less about heavy messaging and more about pure menagerie on a recognizable subject. Ten feet away from Starling’s chair is Ole Ukena’s playful “Cher, Chair, Share (Hello Joseph)” (2011), composed of a “poster of the singer Cher, a chair, a printed definition of the word share.” A riff on the famous “One and Three Chairs” (1965) by Joseph Kosuth, “Cher, Chair, Share (Hello Joseph)” operates similarly to “A Zig-Zag Chair,” but uses humor, rather than severity, to ask questions of value. Cooperative moments like this in the exhibition successfully remind us to think loosely and nimbly about objects and ideas so closely related to ourselves.

Furthermore, “In The Hot Seat” is not limited to physical chairs. There are many images that represent chairs (or figures using them) meant to demonstrate how the chair-as-concept extends into and operates within a larger imaginative context — not just design. This avoids a trap that exhibitions focused on design-objects often fall into. If you’ve spent 20 minutes at the Museum of Modern Art, for example, you are sure to have seen large collections of chairs or accompanying programming that boasts it is “Defining Good Design,” while celebrating — largely — white male designers from the last century.

“In The Hot Seat” offers a fresh take on this predictable setup through its inclusion of artists from a variety of backgrounds and the presence of many functionless chairs. In this way, Yates’ attitude toward this kind of object seems to echo Galen Cranz in “The Chair: Rethinking Culture, Body, and Design,” that “basic concepts of beauty and comfort elude definition. In part, this is because both beauty and comfort are mixed up with status.”

This exhibition definitely has its clunky moments: The decision to cut plinths out of some slightly warping composite wood in a show that derives some strength on material interest is a little distracting at first, and there is some difficulty hearing the speech-heavy video “In House Play” (2018) over the sound of a loudly pirouetting office chair in the next room. These issues are small ones, however, in the larger scope of what “In The Hot Seat” manages to do.

It makes for a thrilling visit and demonstrates how our most fundamental and plural forms can yield new insight time and again — that as long as we continue to engage with them in our day to day lives, they will never tire of investigation across many fields and frameworks. •

“L Autumn Gnadinger is print and digital content editor for Ruckus, where this piece was first published on May 15. Reach Gnadinger at [email protected], and read more at ruckuslouisville.com.

‘In The Hot Seat’