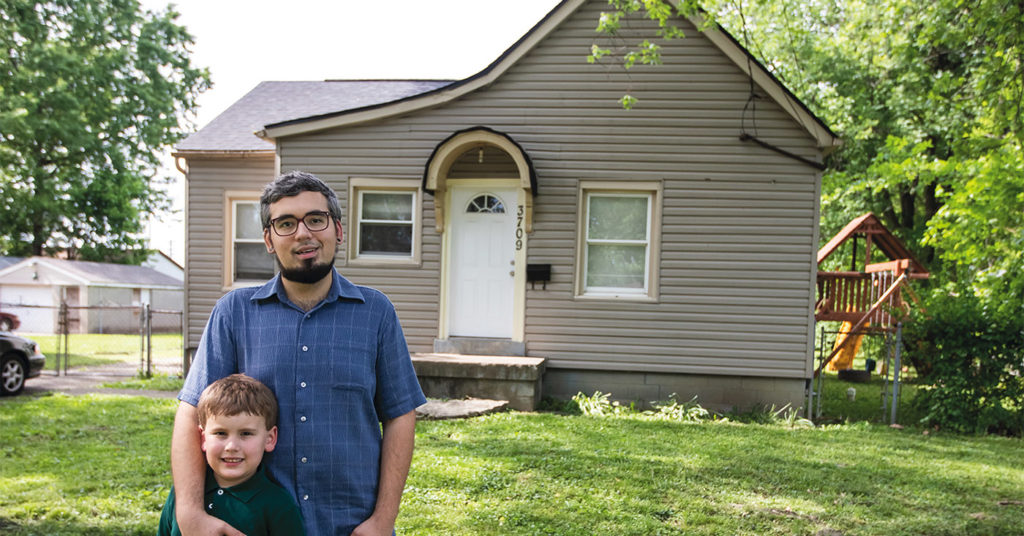 After two years of planning and preparation, Christopher Lopez finally purchased his dream home. He smiled as he recalled moving in with his six-year-old son, “He’s a funny guy,” Christopher chuckled. The first time Christopher brought his son to his new house, he didn’t want to leave. Instead, he wanted to play hide and seek all day with his dad. As Christopher continued talking, his two core values became clear: family and education. In fact, these two go hand-in-hand for Christopher.

The importance of education was instilled in him at a young age by his mother and his grandmother, who were both JCPS employees. Growing up it was “never a question of how important education was, and I’ve carried that with me,” said Christopher. Perhaps this is the reason why he joined Class Act Federal Credit Union when he was 16 years old. “Having that focus on education…I think that’s really important,” Christopher remarked about Class Act, “Even just walking into a branch and seeing all of the different quotes of how important education is – I think it’s just great.”

In fact, Christopher thinks their emphasis on education is so great, that he trusted Class Act Federal Credit Union with purchasing his first home. While first-time home buying can be intimidating, Christopher maintained that Class Act set his mind at ease, “My mortgage advisor was really great throughout the process – we probably emailed back and forth an average of three to four times a day for a month.” From submitting his application to closing on his dream home, Christopher only had positive things to say about his home-buying experience with Class Act. He also remarked that, “Class Act’s mortgage rates are also a huge bonus. They’re better than any other place – it’s not even comparable.”

Christopher continued on about his other positive experiences with Class Act. He expressed how convenient it was to have a branch on UofL’s campus when he was a student. He also liked the fact that their branches are much “less sterile” than most financial institutions. The special playroom for kids at the Fern Valley branch was especially appreciated by Christopher and his son.

While Christopher remarked that credit unions in general “structurally have your best interests at heart,” it is specifically Class Act’s emphasis on education coupled with their excellent customer service that makes them so special to Christopher.  “I often think about how the world would look if education was really emphasized the way I think it should be.” Christopher said hopefully. That’s something else Class Act, Christopher, and all members have in common: the shared value of education and a belief that education can change the world for the better.

Now that his home-buying adventure is complete, Christopher can enjoy watching his son get excited about moving in to their new home. He joked that his son is already planning how to decorate his room, and negotiations for a trampoline in the backyard are in the works. If you are passionate about education like Christopher and want a financial institution that is on your side, visit classact.org, or call (502) 964-7575 to see how you can become a member today!

If you’d like to become a member of Class Act Federal Credit Union, call 502.964.7575 or visit classact.org today.