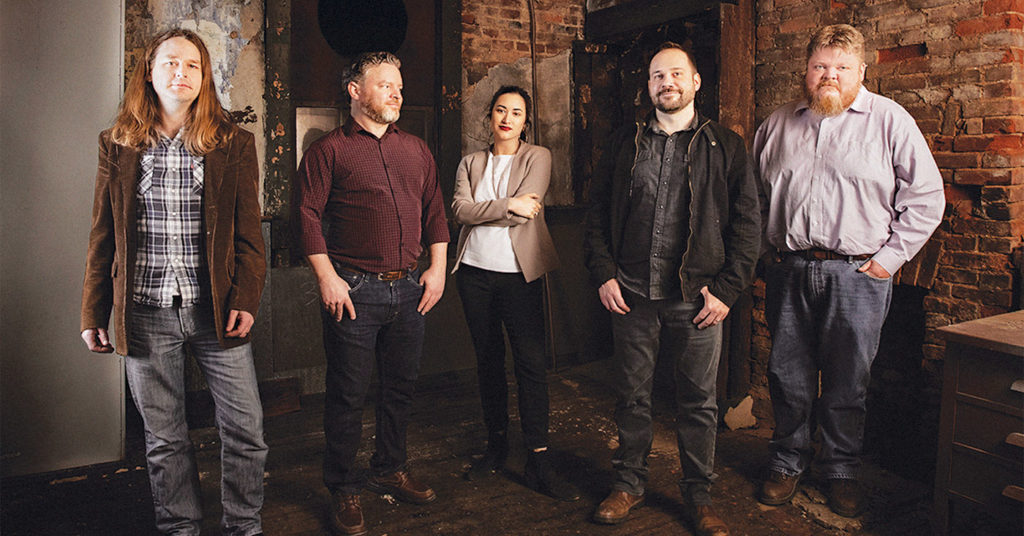 It seems like whenever the expanding Louisville band Hawks needs a new member, the right person always shows up, even in unexpected places. Headed by former My Morning Jacket keyboardist Danny Cash, the Southern rock band is releasing their first full length album Truth Will Out on June 29. While the album was recorded with the band’s original lineup, there have recently been some personnel changes: The two newest members, vocalists Betsy Kelly and Melissa Wirick joined after the departure of keyboardist and vocalist Lydia Tissandier. We spoke with Hawks about the creation of the band, the new album and a continuation toward a planned second album. 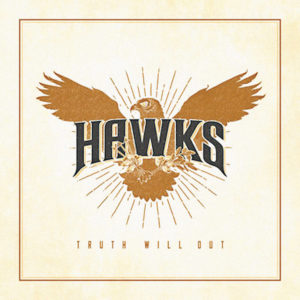 LEO: How did the formation of Hawks happen?
Danny Cash: Lydia and I used to work together with [Hawks bassist] Ben Felker, so basically I just got people I worked with to be in the band. And when Lydia left it was like, ‘Well who is gonna sing and play keys?’ But we also worked with a guy named Woody [Woodmansee], who is a phenomenal keyboard player, but he doesn’t sing. So, we had to replace Lydia with three new people: Woody, Betsy and Melissa, because she was just that good.

So, Betsy, did you work together with them too?
Betsy Kelly: No. Danny, my husband and [Hawks drummer] Jason [Nunn] go way back to high school, and we were all at a Christmas party, and Danny asked if I knew anybody who could sing and I said, ‘Yeah, I do,’ and that was how that happened.

So you have this phenomenal band that just by happenstance fell together because every time you needed a musician to do a specific thing, it turned out the first person you asked was the right person each time?
DC: Yeah. Melissa, we found on Craigslist. I made my own ad looking for someone who wanted to sing in a band, and then I looked to see if there were ads from people looking for bands to sing in, and I clicked on one that said, ‘I want to sing in a band,’ and I wrote back, ‘Well, have I got the band for you!’ We never met or anything. She just showed up at the practice space and started singing.

Melissa Wirick: Danny contacted me on Craigslist on New Year’s Eve, which is also my birthday, so I thought that was special maybe, asking if I’d go to the next practice. Also, since Craigslist can be kinda sketch, I asked him to send me a follow from the Hawks Instagram to be sure he wasn’t a pretend Danny Cash. When I showed up for the first rehearsal, and Danny opened the door to Logan Street Music Studio, I was immediately 99% sure he wasn’t a creep or murderer. Then, I met the rest of the Hawks, and they also turned out to be very cool, non-murderers.

Since Truth Will Out was recorded, there’s been a lot of personnel change — mostly just adding more people. Has that changed the sound of the band?
DC: Well, yeah. What I always wanted was that big Southern Rock sound, with like 18 people on stage. So, now the band sounds closer to what I had in mind — it’s a more raucous big band kind of vibe. And, now we are talking about adding a horn section.

Well, your song ‘Devil May Loose’ is hitting the nail on the head of heartland Southern Rock explosion. And, the current live version also might as well be called ‘Betsy’s Spotlight,’ because Betsy just steals the show with that song.
DC: The last show that we played, I went over to the other band that played and was like ‘That was a really good show. You all were really good.’ And they all just turned to Betsy and said, ‘You are a really good singer,’ but no broad compliments towards the rest of the band [laughs].

Since this album was recorded with the original lineup, and you had mentioned plans to begin recording the second album this winter, how will the second album compare with this one given the personnel changes?
DC: The first album was intentionally tight. Almost all of [the songs] start with strumming guitar, the vocal range is pretty tight. It was intentionally not very broad. Because it was me getting back into writing music and trying to figure out what kind of music I could even write, so it was just kind of simplistic in a way. But, I think the kind of music we have been playing lately now — that it is coming through a fully fleshed-out band that has been playing for a while — it just feels broader and full and has more color and range to it. Like, we have a couple new songs we have been playing that are pretty straightforward, but it’s not just me in the basement anymore. It’s me and other people bringing it to light from the get-go.

You brought up that a lot of the songs on the new album were you getting back after taking a long break. A lot of readers are going to know you as a former member of My Morning Jacket. Is there a reason why you didn’t want to get back into music for a while?
DC: I did help other people with their projects and recorded other people’s bands. I did a lot of recording for a while, so I never quite went away from music entirely. But, at least very early on, when I quit the band, I thought anything I do will be compared to that band, so I didn’t want to deal with that. So, I just kind of avoided doing anything that was out there in a meaningful way or in a spotlight kind of way. But, it’s been enough time now… it’s been a challenge for me to really work on singing and songwriting and to do this kind of thing that once upon a time I used to do a lot, but it has really been a long time. And enough time has passed now that if someone put on my tombstone ‘Founding Member of MMJ’, well there are worse things that could happen, [laughs], so I am OK with that.  •