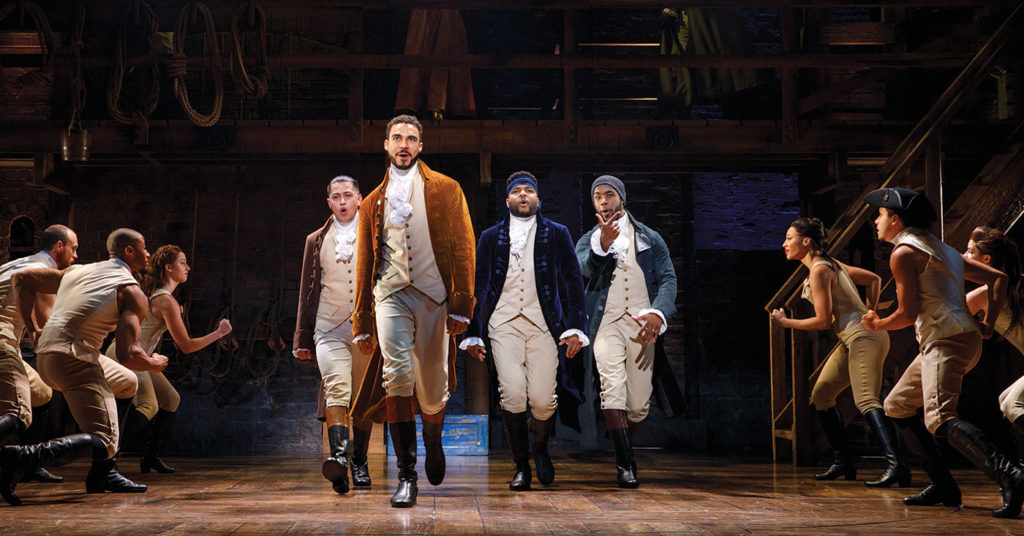 This show has always been all about narrative.

Even those who don’t follow the musical theater scene have been taken by Lin-Manuel Miranda’s hip-hop retelling of the founding of our nation. The most captivating thing was Miranda’s words. Like Hamilton, a man who wrote like he was “running out of time”and wrote his way into prominence, Miranda wrote memorable, passionate lyrics that made the show a sensation, leading to record-breaking Tony award nominations and two Broadway touring casts.

Now, however, as “Hamilton” arrives in Louisville, it’s clear there’s more to the narratives of “Hamilton” than simply the words.

One of the first things that stands out is Andy Blankenbuehler’s choreography and the way it tells the story as well as do any lyrics. Take, for example, the dancers during Burr’s (Josh Tower) solo  “Wait For It.” Throughout the song, the dancers spend most of the time simply seated in chairs to the side of the stage, watching Burr and, well, waiting. As the song swells to its climax, they stand and start to move, but it’s still restrained and limited.

Compare this to “The Room Where It Happens,” essentially Burr’s “I want” song, when he decides to stop waiting and start doing whatever he can to achieve his goals. The choreography here is much busier and more frantic, much like the nearly manic choreography that often surrounds Hamilton (Edred Utomi) throughout much of the show.

One of the most visually stunning choreographic moments was during “Satisfied,” in which the company and main cast — with the help of the turntable stage — literally turn back time. The turntable stage is itself a thing of beauty. It breathes life into David Korins’ scenic design, which is less minimalist and more intricately versatile, full of ropes and layers but lacking specificity so it can suit any setting.

There’s also a member of the company assigned the role of the “bullet” who eventually becomes Hamilton’s demise. Her dance is teased earlier in the show as the revolution rages and is fulfilled in striking fashion during the penultimate “The World Was Wide Enough.”

Lighting, as designed by Howell Binkley, is also smartly done, often focused tightly on the character sharing their story, which shifts from Burr to Hamilton to Angelica (Stephanie Umoh) and Eliza (Hannah Cruz) and also Hamilton’s political rivals. It’s even funny at times, as in one moment during one of King George’s (Peter Matthew Smith) solos. As he sings, “I’m so blue … ” under a warm light, he waits, stamps his foot impatiently, and the light switches to blue.

Of course, a good story needs the right storytellers to be compelling, and this Broadway touring cast of Hamilton certainly delivers with its cast. Tower’s Burr is politically oily and frustratingly stagnant, but he portrays his longing and his regret in such a way that it’s difficult not to empathize.

While some performances felt more or less in the vein of the original cast, Utomi makes his Hamilton his own, distinct from Miranda’s famous performance. Utomi starts the show by zeroing in on Hamilton’s nature of having “a lot of brains but no polish.”

Young Hamilton is awkward, jumpy, and overly eager. The audience has the pleasure — and sometimes the pain — of watching how he evolves as he gets older.

Cruz’s Eliza has a bubbly sweetness to her, but she’s also unafraid to be ferociously angry, as in her heartrending solo, “Burn” and even before, as she tries to hold her husband’s quenchless, flighty ambition in check during “Non-Stop.”

Bryson Bruce fills his Lafayette with an addictive energy, but it’s his performance as Thomas Jefferson where he truly stands out, delighting the audience with his hammed up “What’d I Miss?”

Smith’s King George is also a crowd-pleaser, petty and fitful as a spoiled child.

Of course, there are many ways to tell a story, but Miranda’s music and lyrics deserve all the hype they receive, and it’s fitting that words are given such a spotlight for a show about a founding father who was such a prolific writer. The lyrics of the show are the kind that inspire you to do more, to be bolder and unabashedly ambitious, while they also paint a picture of how that spirit without moderation can lead to a downfall.

At times, they capture the joy and youthfulness of characters eager to make a difference, a mirror of America itself at the start. But much like the country, these characters also have ugly flaws that often lead to their downfall. Running motifs are about “imagining death so much it feels more like a memory,” about whether to die in glory or be content with staying alive and, most important, about the narratives that make history and who shares them. They run through the show seamlessly and are fulfilled breathtakingly.

Whether it is performed on Broadway, in Chicago or elsewhere in the country with the national touring casts, there is little wonder that “Hamilton” is such a coveted theater experience. Fortunately, even if you missed your chance to get tickets earlier in the year, their touring casts continue the Broadway tradition of the “Ham4Ham Lottery,” offering $10 tickets to winners who apply two days in advance through their app.

There are no guarantees, of course, but when it comes to seeing Hamilton, no one wants to throw away their shot.