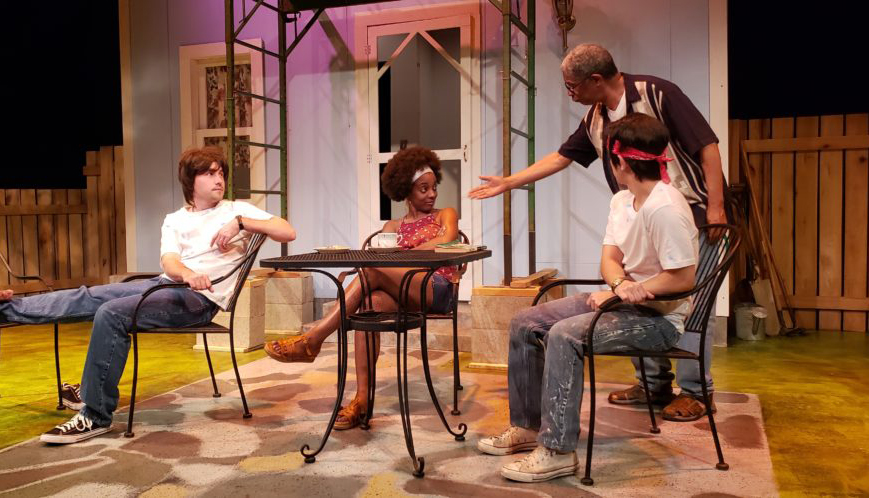 Playwright Juergen K. Tossmann has long been a philosopher of junkyards and garage sales, auto repair shops and race-track grandstands. Thinking back over a couple of decades of Tossmann’s plays (I think I’ve seen them all), it seems to me that the archetypal Tossmann characters usually have dirt under their fingernails and wise, well-thumbed books close at hand.

That’s certainly the case in Tossmann’s new play “When Fishies Rain Down From the Sky,” which opened last week in a bracing, witty Bunbury Theatre production.

The setting is a backyard in Columbus, Ohio, in 1979. Two young men, Jerry (Andy Szuran) and Mike (Bailey Story), are painting the house where Atticus (Clyde Tyrone Harper) and his granddaughter Maya (Brittany Patillo) live.

Tossmann has always been an exuberantly imaginative playwright who revels in wordplay, backstories and digressions. And there is plenty of that here. Atticus is an elderly, black man whose intellect, lived experience and gift for acerbic anecdotes create an endlessly entertaining stream of stories and ideas. And it doesn’t hurt that he knows his way around things such as Negro League baseball, jazz and black cinema.

It is Atticus who drives this play. He’s a walking paradox. His manner and speech are unfailingly calm and dignified. But he weaponizes that dignity — and the most notorious of American racist epithets — in a calculated campaign to unsettle and provoke the three younger people. The “Magical Negro” trope in theater and film is, of course, a discredited and threadbare device. But if Atticus is a “Magical Negro,” his is a different sort of spell. And Harper plays what would seem to be a difficult role with uncanny grace and authority.

Still, the provocations in this play are not a one-way street. The young people in this play have plenty to offer, as well. Mike, who is just coming to grips with his own complicated sexuality, is grappling with the philosopher Martin Buber’s ideas about relationships. Maya’s passions are stirred by the emerging sounds of hip-hop and the revelatory poetry of Maya Angelou. And, though Jerry’s life has been immersed in racism and homophobia, in the end even he will bring something to this tale.

‘When Fishies Rain Down From the Sky’