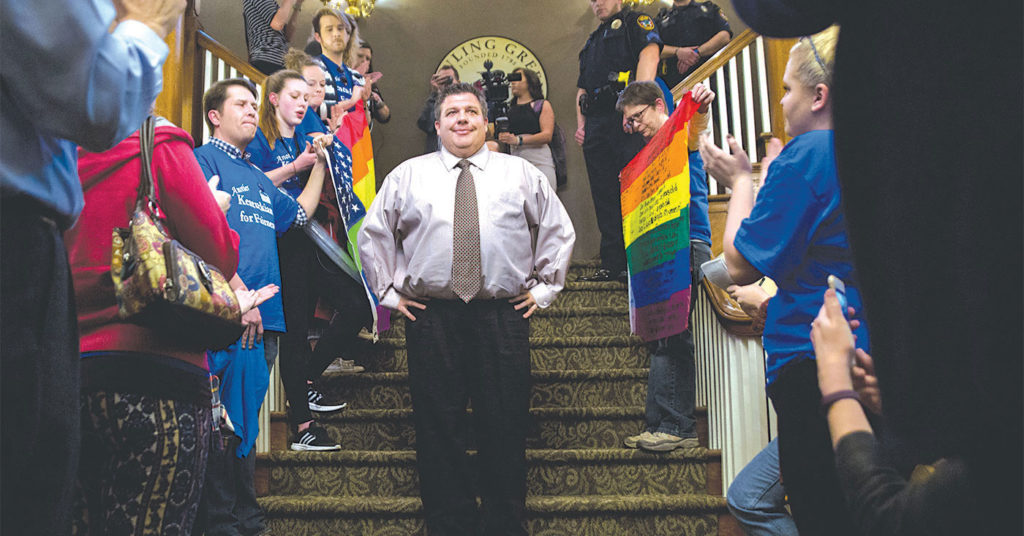 The crowd outside of Bowling Green City Hall did not seem like one that just had its hopes squashed. The group milled about, chatting as they were filmed for a Facebook Live video. One man waved a small Pride flag.

Just minutes before, the Bowling Green City Commission had voted 3-2 to reject an ordinance that would have protected individuals from discrimination based on sexual orientation and gender identity.

Members of the audience at the May 7 meeting, most of them Kentucky Fairness Campaign supporters, were disappointed but not surprised.

“We are going to get there,” said Commissioner Brian “Slim” Nash, one of the yes-voting board members, as he addressed the crowd. “It takes effort, it takes losses and it takes building momentum, and that’s what we’re doing.”

This was not a new scene for the Fairness Campaign, which supports cities and towns across Kentucky in enacting their own “fairness ordinances” — laws that prevent discrimination in housing, employment and public accommodations on the basis of sexual orientation and gender identity.

During the group’s first effort to get a fairness ordinance passed in Kentucky, in the 1990s in Louisville, the measure failed three times, stymied by resistance from the Board of Aldermen (the pre-merger version of Metro Council). But as elections pushed out some board members and others changed their minds, Louisville adopted its fairness ordinance in 1999 — 20 years ago.

Since then, nine other municipalities have followed Kentucky’s largest city, tracing the same pattern: A group of residents decides it wants to pass a fairness ordinance in their area, it contacts the Fairness Campaign, and it receives help from the state group to get elected officials there to adopt the law.

“Folks may think that we have a far more nuanced strategy than we do,” said Fairness Executive Director Chris Hartman. “We are not geographically marking cities that we think will be the next big spots for Fairness. We really are just coming to communities where people have asked for resources and help to attempt to pass their own fairness ordinances.”

Sometimes, their efforts are met with resistance, which can go on for years, as it has in Bowling Green. There are at least 10 active Fairness movements in Kentucky now, Hartman said.

The day before Bowling Green’s vote, Henderson, Kentucky, commissioners held a work session to discuss adopting a fairness ordinance again (the town had become the third Kentucky municipality to approve one, but then a new board overturned it 18 months later). The commission was scheduled to consider the first reading of the ordinance Tuesday, June 11.

Since 2000, the Fairness Campaign has worked to pass a state fairness law, too. This is actually the Campaign’s main focus, according to Hartman, although he said installing fairness ordinances in Kentucky cities and towns serves to build support for the mission on the state level, too.

“We’re never going to get full fairness by passing it city by city forever,” he said. “We could pass Fairness in 100 more cities and only get 10 more percent of the population, because we’re a mostly rural state. It’s going to have to be the Kentucky General Assembly.”

That, too, has been a slow march of gains and losses. This past session, a fairness bill had the most cosponsors ever at 23. Hartman believes that 25% of lawmakers were in favor of the legislation, but it never received a hearing in the House or Senate judiciary committees, both of which are Republican chaired. Republicans control both chambers of the statehouse and the governor’s office.

At the same time that the Fairness Campaign fights for local and state fairness laws, it spends equal energy fighting anti-LGBTQ legislation (this session it was an adoption bill that could have denied adoptions to LGBTQ parents), Hartman said.

And, the Campaign is busy defending its fairness ordinances in towns that have already adopted them. Three weeks after Bowling Green’s vote, Paducah, Kentucky’s city commission deflected a challenge to its fairness ordinance, which was adopted in 2018. “I’d say we’re, I don’t know, maybe halfway up the mountain,” Hartman said, “still fighting off the hoards coming down at us as we climb up.”

The Campaign has characterized its first, lurching attempt to pass a fairness ordinance in Louisville as “failing forward.” That’s the same phrase Hartman uses to describe what’s happening in Bowling Green.

“We knew which way the vote was almost surely going to go two weeks ago,” he said. “But we know that it was important and historic to push for the vote to get the city commission on the record for the first time in 20 years and to let the citizens of Bowling Green truly know where they stand.”

The Bowling Green City Commission declined to even consider the ordinance in 1999 when the city’s human rights commission asked it to do so, and it has ignored pressure from residents to take it to a vote. In 2017, Nash introduced the ordinance for the first time, but it could not get a second — even for a discussion.

Regarding the rejection in May, Commissioner Sue Parrigin, one of the three no votes, told LEO she opposes the ordinance because it is a social justice issue that should be decided on the state or federal level. Despite the number of people who showed up in support of one at the May meeting (55 out of 86 speakers), Parrigin said that the majority of emails, phone calls and messages she received were against the ordinance — mostly for the same reason she was.

“I think it’s important to understand it’s a SOGI [sexual orientation, gender identity] ordinance,” Parrigin said, “and I think it’s important to understand that the conversation is being held at the state and the national level, and obviously, that’s, to me, the most appropriate venue. And whatever happens at those levels will then be the law of the land, and then the land will abide by that.”

Parrigin declined to voice her opinions about the LGBTQ community in Bowling Green, saying it was irrelevant to her opposition to the ordinance.

Bowling Green Mayor Bruce Wilkerson has said in the past that he opposes the ordinance for the same reason Parrigin does. He did not respond to a request for comment.

The third no-voting commissioner, Joe Denning, has not commented publicly and did not return LEO’s requests for comment.

Still, the ordinance has gained traction over the years in Bowling Green. In 2012, the Fairness Campaign branch there gained new momentum when a student began to lobby local businesses. After commissioners refused to second Nash’s motion to discuss the fairness ordinance in 2017, Commissioner Dana Beasley Brown, who was running on a promise to support the fairness ordinance, unseated a commissioner who opposed the measure. She voted for it on May 7.

State Rep. Patti Minter, who represents Bowling Green’s 20th District, said she believes that most residents there support the ordinance or are indifferent. Those who outright oppose it, she believes are a “very vocal minority.”

Just the fact that Minter, a founding member of the Bowling Green Fairness movement, was elected as a state representative is evidence enough that the city supports the ordinance, she and Hartman said. But they also point out that more than 100 businesses have pledged support for the ordinance.

After the May commissioners meeting, Minter and Nash called for payback come election time. All commissioners and the mayor are up for election in 2020.

“We’ve got two on the commission,” Nash said to cheers. “We need one more.”

“Hey, that’s what democracy’s all about,” she said, laughing. “It’s all about the will of the people.”

On the state level, Hartman believes, it could be another 10 years before fairness legislation passes, while Minter is more optimistic — “anything can happen,” she said.

The difficulty of a task has never been the deciding factor for the Fairness Campaign to get involved in an effort. The organization currently has active chapters in Shelbyville and Elizabethtown — two Kentucky towns that Hartman admits aren’t likely to pass a fairness ordinance soon.

The Fairness Campaign’s real strategy isn’t based on geography or which party controls which chamber — it’s founded on persistence.