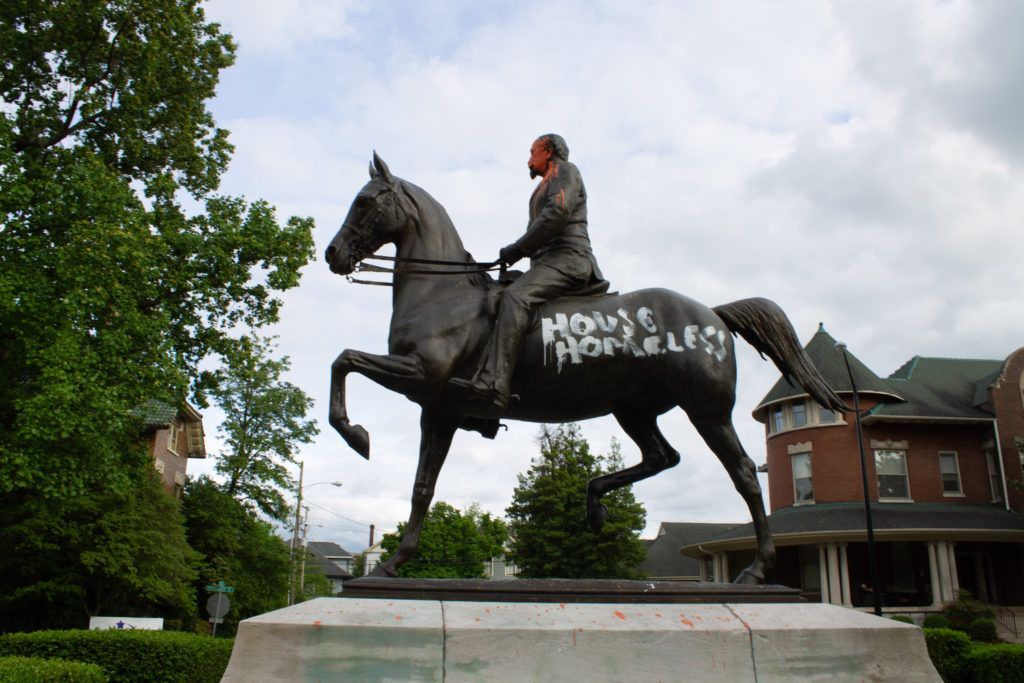 Just over a month after the city Landmarks Commission voted to remove the controversial John B. Castleman Statue from Cherokee Triangle, several Louisville organizations and residents have joined to appeal the decision.

They accuse the city and city review panels of violating the Kentucky Constitution, “which prohibits arbitrary government power,” and failing to weigh the importance of the bronze statue to the Cherokee Triangle neighborhood.

Mayor Greg Fischer’s spokesperson Jean Porter said in a statement that he is “disappointed to see the process slowed by appeal, but is confident that the Landmarks Commission acted appropriately and made the right decision in supporting the decision to move the statue.”

“The Mayor stands by that decision. Louisville must not maintain statues that serve as validating symbols for racist or bigoted ideology,” Porter said.

The Historic Landmarks and Preservation Districts Commission voted May 9 to overturn the Cherokee Triangle Architectural Review Committee’s decision, thereby allowing the city to move the statue. In pushing to move the statue, Fischer had said, “My threshold question was whether this statue would be appropriate in a predominately African American neighborhood. The answer obviously is no. It would be viewed as disrespectful of a historic and painful past.”

But, among the points preservation attorney Stephen T. Porter made in the appeal filed in Jefferson Circuit Court is that the city did not consider that the statue has long been part of the Cherokee Triangle neighborhood.

“Somehow, the staff decided this statue, a 106-year ‘landmark,’ as described in a Louisville Metro publication, is not a contributing historical element to the Triangle. For years, it has been considered a landmark and an icon in the neighborhood,” he wrote.

Other points he makes in the appeal are:

— The Commission was “arbitrary and erroneous” in how it considered the tie vote taken by the Architectural Review Committee. That Committee had rejected the city’s request to move the statue after a tie vote. The Commission concluded incorrectly that a tie vote led to no finding of fact, and therefore it should reverse that panel’s decision. But, the appeals says, “No findings were possible because of the tie.”

The Castleman statue has been subject of a cross-city debate since the events of Charlottesville, Virginia, accelerated a national conversation on Confederate monuments. Those in favor of the statue’s removal argue that it is an unfriendly reminder of the Confederacy because Castleman served in the Confederate army; whereas others argue that Castleman’s time in the army should not overshadow his later contributions to Louisville. They also say the statue was not erected to commemorate his Confederate service, but rather to memorialize is civic accomplishments.

One of the main nonprofits in the appeal is the newly established Friends of Louisville Public Art, or FOLPA. The group announced their formation May 30 and launched a campaign to protect the Castleman statue, including a GoFundMe page, which had raised $1,125 of its $10,000 goal as of June 10.

“This has been a political hot potato for some time and there’s been a lot of misinformation about it,” Steve Wiser, a spokesman for FOLPA , local historian and architect, told LEO. “From our vantage point, we just want to harness a debate on the merit of the statue.”

Wiser also said other Louisville monuments could be vulnerable to removal with similar reason. “There are about 20 memorials that we could potentially replace if the same logic is used to remove the Castleman [statue],” he said.

Specifically, he mentioned the Watterson Expressway, named for Henry Watterson, founder and editor of the Courier-Journal who served in the Confederacy and used racial slurs in his writings. A press release from FOLPA also named the Louis XVI sculpture and Hogan’s Fountain by Enid Yandel, a Louisville sculptor who won a Confederate monument design competition (her vision was later rejected), as monuments with similarly problematic histories.

Dr. Cate Fosl, a UofL professor and director of the UofL Anne Braden Institute for Social Justice Research, is in favor of removing the monument from its current location. “I don’t think it well represents our city with regard to our desire for more diversity and inclusiveness,“ she said.

In terms of other Louisville monuments with problematic pasts Fosl said, “We should be thinking of reparative measures to balance out some of those icons going forward. … In each case, they deserve a separate discussion.“

“The second thing is to listen to the voices of the community, all of the voices,“ Fosl said.