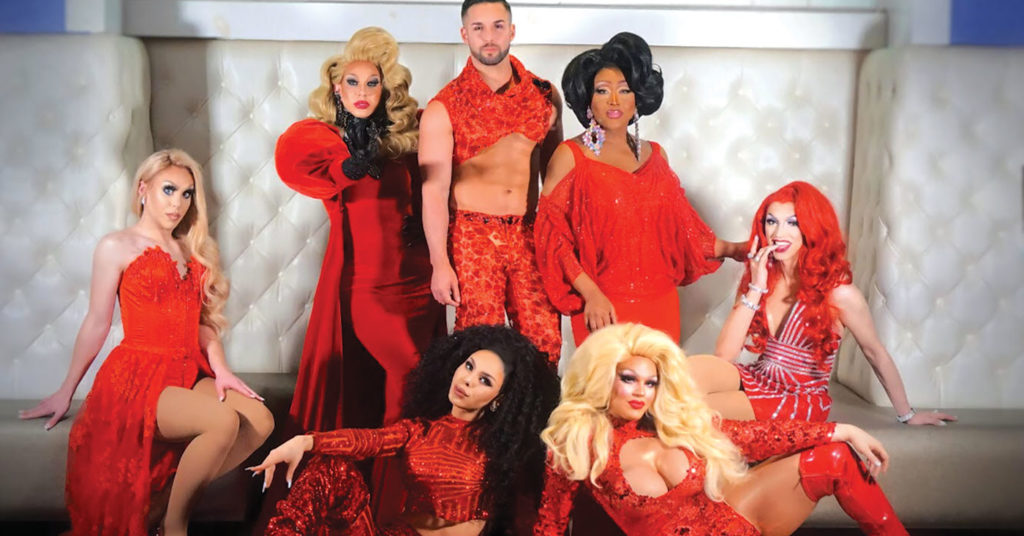 A queer-topics writer’s gig is usually a game of “Who’s behaving badly today?” (Spoiler: Kim Davis et al., white gays and TERFs, Republicans and anyone openly weeping about “religious freedom”). But this is Pride season, so it feels right to reflect on how much there is for queer folks to actually be proud of in our city.

Louisville can be a great place to be queer, and it’s because we’ve got workers, y’all.

Our city is full of people with vision and energy that they use to make it a queer-friendlier place for the rest of us.

We’ve got an embarrassment of riches when it comes to queer entertainment staples: The Louisville Pride Foundation, our own chapter of Kentucky Black Pride and Kentuckiana Pride — that’s a lot of pride for one city.

Our best drag venue, Play, showcases our local celebs such as the Louisville Play Mates, as well as nationally-known drag queens. We’ve got a drag king boy band, Boyzz By Knight, an emergent House Ball scene and plenty of gay bars to choose from.

Nightlife is the first thing people think of when the queer social scene comes up, but Louisville has other activities for those looking for enrichment, education or sober spaces.

WE Spoke Louisville is one of them.

WE Spoke is an all-women’s cycling group that aims “to provide a safe space for all who identify as women, cis-gender, trans, gender nonconforming, nonbinary and femme, included.” There are rides for every level of fitness, and often they include trips to coffee shops or parks. Founder Sarah Traughber told LEO, “As a survivor of emotional abuse, loss of identity and abandonment, tackling huge strides in healing came to me by way of cycling, writing and art.” Another member said, “It is easy to feel like you belong, whether you want to actually socialize or just get to ride. WE Spoke welcomes women of color, trans women and nonbinary folks, especially.”

For the kids, Louisville Free Public Library just had its first Drag Queen Storytime, after much hoopla, one cancellation, demonstrators and an unhelpful Courier Journal op-ed (“Drag Queen Storytime: It’s foolish to bring kids into the sexual world of adults”).

Another new offering is Queer Kentucky’s weekly Queer Sober meetup and beginner’s yoga. The yoga practice “encompasses a 12-step program” and aims to “provide a safe space for sober/sober curious queer people that allows open conversation and body positivity.” This is a much-needed contribution to the queer community and timely, as the community as a whole works to redefine itself beyond the gay bar and drag club.

Speaking of Queer Kentucky (queerkentucky.com), what doesn’t it do?

Relatively new, this self-described “platform for Queer people from all around our great Bluegrass state” has become a go-to for local queer news and think-pieces. Queer Kentucky’s crown jewel is its collection of profiles that showcase individual queer folks from throughout Kentucky. This project demonstrates that “queer” means many things to many people and that our community is not a monolith — something these profiles convey in a visceral way. You can see them and all QK has to offer (even swag!) on its website, including profiles of familiar faces — local queer leaders, activists and educators such as The Fairness Campaign’s Chris Hartman.

Speaking of the Fairness Campaign, Louisville in 1999 became one of the first cities in the South to offer its citizens protection from discrimination based on their sexual orientation and gender identification. Hartman told LEO he is particularly proud of our fairness ordinance because “it included transgender folks when few cities would — even national gay rights organizations were advising against transgender inclusion. The Fairness Campaign and our city’s leaders said Fairness in Louisville would be for all, y’all — and so it was.”

Another leader is Dr. Kaila Story along with her “Strange Fruit” podcast co-host Jaison Gardner.

These two don’t just do the work of calling bullshit on things that inhibit queer/black/feminist liberation. They celebrate the good, and their joy makes people pay attention. They told LEO that “as two black queer people on a public radio station in the South, we are proud to be ‘possibility models’ of just how much learning and laughter can take place when folks center and listen to the voices, perspectives, knowledge and lived experiences of Black folks, queer and trans people and women — and especially those who live at the intersection of multiples of those identities.”

They’ve made “best of” lists and earned awards for their podcast, but their work in the community is another reason we’re so lucky to have them. You may have seen them speaking on panels at the Speed Art Museum, lecturing for Creative Mornings or simply out supporting queer programming. They call themselves #TeamStrangeFruit, and their fans are “Fruit Cakes.”

They just came back with new episodes; you can hear their work on WFPL.org and see them almost anywhere one or more (queer folks) are gathered.

Dr. Story is also an associate professor in Women’s, Gender and Sexuality Studies with a joint appointment in the Department of Pan-African Studies at UofL, which is ranked amongst the top LGBTQ-friendly universities.

It also boasts the UofL LGBT Center, whose success, according to Director Lisa Gunterman, “is made possible with the support of students, campus colleagues, UofL Pride Alumni Council, individual donors, community organizations, businesses, corporations and volunteers who are dedicated to building a campus climate where all students are valued and empowered to reach their full potential.”

The city itself is overwhelmingly queer-friendly, as indicated by the 70 community organizations, businesses and corporations that partnered with the Center last year. At the Center’s 2018 fundraiser, Pride at the Museum, UofL president Neeli Bendapudi spoke in support of the Center and the queer community. At this time, the LGBT Center’s long-range goals include a multidisciplinary clinic specializing in LGBTQ health, expansion of programming for LGBTQ students of color and an endowed scholars program.

Louisville is known as a haven for queer folks from all over Kentucky, but Gunterman said, “What a lot of people don’t see is that there’s a community with their arms open to wrap around the [LGBTQ] students.”

The Pride at the Museum fundraiser was a visible display of the public support enjoyed by the queer community in Louisville.

We like to brag that Louisville is one of only a handful of cities with all five major cultural institutions, but another bragging point is that most of them lend wholehearted support to the local LGBTQ community. Louisville Orchestra Music Director Teddy Abrams performed in support of the UofL LGBT Center at last year’s Pride at the Museum, held at the Speed Art Museum. The Speed has proven to be a reliable ally, frequently partnering with UofL’s LGBT Center to showcase queer writers, artists and thinkers. The Louisville Ballet, including staff, dancers, choreographers and Artistic and Executive Director Robert Curran, have refused to let conservative pushback inhibit their artistic growth, as evidenced by their celebration of last season’s “Human Abstract” and the open letter of support for the LGBTQ community they published after receiving homophobic hate mail over said show.

We’ve also got plenty of less mainstream outlets eager to support the community.

Many of the smaller outlets such as Art Sanctuary, 1619 Flux and the annual Fringe Festival are so inclusive that it’s hard not to think of them as an extension of the queer community.

Louisville boasts several initiatives intended to support queer youth, including Louisville Youth Group, which for nearly 30 years has provided education, support and activities for queer youth, and the Sweet Evening Breeze LGBTQ Youth Shelter, which opened its administrative office on June 1 and plans to open its doors to homeless LGBTQ youth this winter — the only shelter for queer youth in the city, which is a big deal. Check out its Facebook page for how to support this project.

Ban Conversion Therapy Kentucky is another group working to make sure that young LGBTQ folks don’t suffer the same treatment many queer adults have experienced. With Tanner Mobley at the helm, it has been working to protect LGBTQ youth from dangerous so-called “conversion therapy” for three years. The 2019 legislative session ended without passage of House Bill 211 or Senate Bill 248, which would have banned the practice. But Mobley told LEO the House bill gained 15 more sponsors this year, the Senate bill was introduced for the first time and more than 200 volunteers worked on the issue.

BCT KY will be back in 2020, fighting toward that goal that every child in Kentucky will be safe from these dangerous practices.

The effort to ban conversion therapy is tangentially related to one thing I appreciate most about Louisville: its abundance of queer-friendly churches. A friend visited recently, and as we drove through the city, she seemed visibly nervous as she said, “This is a lot of churches.”

It is a lot of churches, especially if you’re not from the Bible Belt.

The church is responsible for an enormous amount of queer pain, but in many Louisville neighborhoods, church signs bear rainbow sticker indicating their acceptance.

Louisville is also home to Highlands Baptist Church, which famously broke with the Southern Baptist Convention over their acceptance of LGBTQ people.

As someone who grew up in that denomination I appreciate this show of solidarity, and as someone who loves this city, I appreciate the points of pride I had to leave off this list — queer book clubs, scholars, politicians and musicians (OK, I’d be remiss not to mention GRLwood and their tour de force Daddy) — but maybe I’ll be back in September, seeing how we have another Pride just around the corner. •