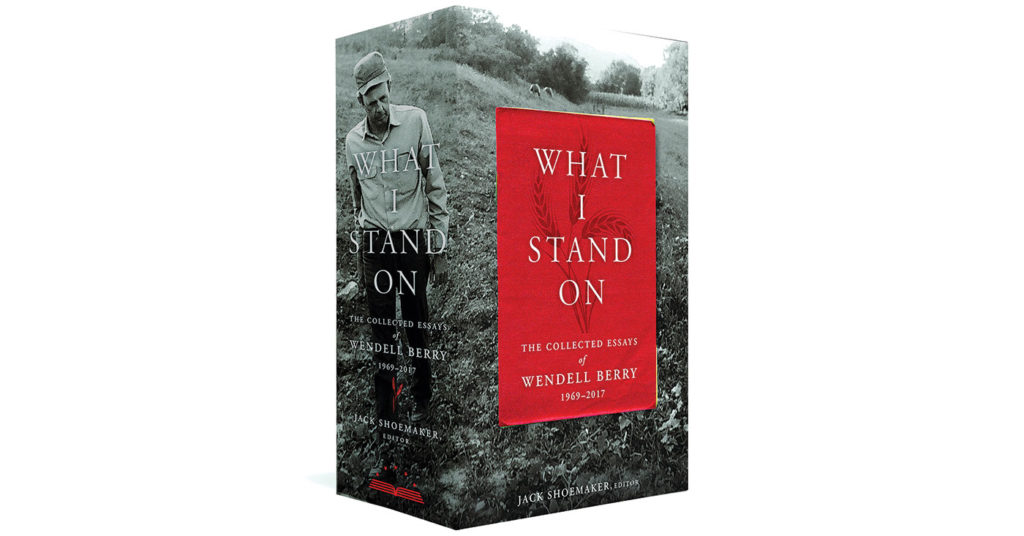 Does this amount to a life’s work? Not hardly. Library of America had published a volume of Wendell Berry’s fiction last year. And only two of the chronologically presented selections making up these 1,700 pages are full book-length works.

The first volume, written within the 20th century (but is that the time that’s most evoked therein?), has the complete “The Unsettling of America.” It follows the development of Berry’s voice, though he was always a sage observer with a profound philosophical bent. The second volume covers the turn of a century. By the time he got to “Life Is a Miracle” — also here unabridged — Berry was a practiced firebrand. And he’s become ever more unique in his desire and capacity to teach while also not suffering fools gladly.

“… [I]n all our attempts to renew or correct ourselves, to shake off despair and have hope, our starting place is always and only our experience.” Berry’s experience has been to watch cherished institutions exploited for profit, convenience and supposed progress. And he’s angry as can be when great foundational concepts are co-opted. He captures the sadness that might be tricky to fathom as the glory and toil within stewardship of land and life is branded and rendered ineffectual by much of the mainstream in the environmental movement. Among the excerpts of “Citizenship Papers,” he excoriates the George W. Bush administration for wanton shredding of Jeffersonian democracy.

And technology worship gets a droll beatdown in “Why I Am Not Going to Buy a Computer.” This essay is brilliantly structured to draw out dry humor — but it’s also practical, containing Berry’s list of requirements before bringing something into his life as a potential tool. This isn’t just “if it’s new, I don’t want it” grousing — it’s a merging of everyday pragmatism and mindfulness. It beats the hell out of most magazine pieces on hipster minimalism, or anything from Marie Kondo.

Much of what brings smiles from these dozens of essays are universal appreciations that lesser writers often sentimentalize into nostalgia — such as Berry’s pride at hitching a team at an early age. His observational power finds within moments and microcosms and draws out, for example, how that feat with farm equipment and animals inexorably linked him to family and community and way of life and land, water and air.

And there is certainly warmth and appreciation among the passages reflecting on fellow travelers, thinkers and poets; these are more frequent in the second volume. A readily apparent hope for America and for the global community  doesn’t get a cheap pass into the pages written by this agrarian poet-philosopher from Henry County: “It is altogether conceivable that we may go right along with this business of ‘business,’ and with our curious religious faith in technological progress, with our glorification of our own greed and violence always rationalized by our indignation at the greed and violence of others, until our land, our world and ourselves are utterly destroyed. We know from history that massive human failure is possible.”

Wendell Berry wants an appreciation of — and an investment in — the perspective on life that accepts limits. That’s not a popular view these days — and it seems that for decades he knew what an uphill battle he’d be facing as a rural, intellectual activist. But he understands how power accumulates from habit and reinforcement and confirmation — as may be found in this massive, valuable compilation.

Wendell Berry will appear at Crescent Hill Baptist Church June 26 at 7 p.m. This event is long sold out, but you can double-check availability through eventbrite.com or Carmichael’s Bookstore at 896-6950. •