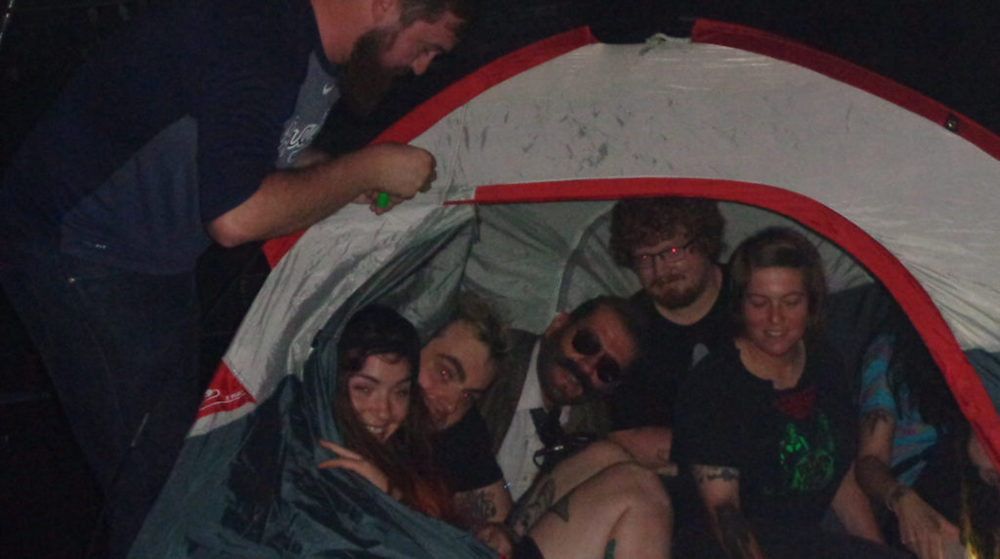 “Shhh. Shhh. You’re too loud” Senor Diablo, the caricatured manager of thrash metal band Belushi Speed Ball, implored during their performance at Odeon for a special “unplugged” set. How is it that one of the loudest and messiest live bands in Louisville is playing un-amplified and asking everyone to be quiet? In a very tongue-in-cheek move, Belushi asked Odeon, a bar and live music venue, to play in this listening room style. Due to noise complaints from neighbors resulting in multiple fines, Odeon has recently made drastic changes to how its live music shows are run. On May 23, Odeon announced on its Facebook that, “Starting today all shows in our venue will be brought to you in the vein of an ‘Unplugged’ series.” It further explained that “everything mic’d and going though[sic] the house PA still. Drums can be had as long as it’s at a lower level.” Due to the new policy, many bands that had been scheduled to play Odeon decided to rebook elsewhere. However, Belushi’s frontman Vinny Castellano said, “When we saw [Odeon] were unplugged, we wanted in on some of that action.”

Belushi Speed Ball has a theme for each of their live performances, and for this unplugged edition, the emphasis was on being quiet around a makeshift campsite complete with a four-man tent, sleeping bags and granola bars thrown to those attending. The room was dark except for Diablo’s camera light, a few luminous cell phone screens and bursts of flashes from the disposable cameras they brought causing a strobe-like effect. Intermittently, cotton balls were tossed and thrown at anything making noise above a whisper. Diablo read scary stories in-between songs, one being about a gangly man, which led into their song “Pop the Bubble/Glass Bones and Paper Skin.” The band sat in a circle crosslegged, with some members in sleeping bags, and they waived the use of the PA opting instead to strum electric instruments like acoustics. The drummer lightly tapped on cymbals and a snare to keep the beat, which proved difficult at times for the band to hear and led Vinny to grunt:“a little bit quicker.” Vinny still sang loud even without a microphone, leading Senor Diablo to bluntly state, “too loud.” Around this time, the person manning the soundboard left the room realizing his services weren’t needed.

Like any good camping trip, there was good company, good drink (thanks to Diablo’s signature Listerine bottle) and good atmosphere. This was also a good experiment on a different approach to how a band can sound. To use one of their song titles in asking the question if they should play another unplugged show, “Are You Feeling It Now Mr. Krabs,” it’s a resounding “no.”