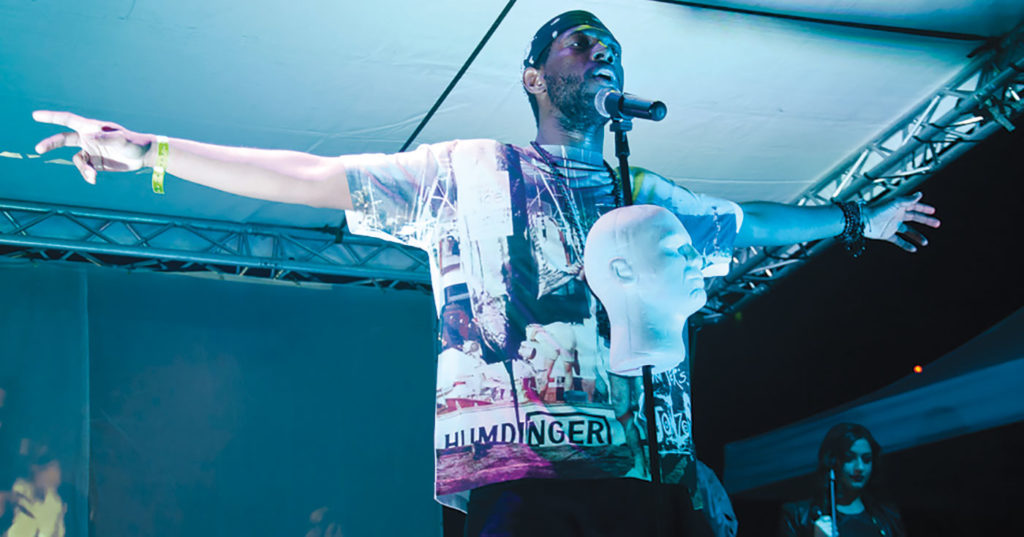 In the music community and beyond, Jecorey “1200” Arthur is one of the most crucial voices in the city, and Arsnova — his recently-released full length record — is his most powerful work yet. Below, read Arthur’s break down of each song from the album:

‘Legends’
“‘Legends’ is the reverse story of African diaspora. It contains elements of ‘Legend (The Crown of Roses)’ by Pyotr Ilyich Tchaikovsky, a choral piece with lyrics depicting how Jesus’ crown of thorns caused red drops of blood that looked like roses. The African American struggle is a crown of roses, and it’s summarized in this track before being dismantled for the remainder of Arsnova. ‘Welcome to the Ghettos of America’ is a greeting, and ‘African kings that fought for our freedom, but you ain’t gotta just read about ‘em you can be ‘em,’ is a call to action.

‘Gentrification’
‘Gentrification’ is a call for ownership of hoods. It contains elements of ‘Prelude and Fugue No. 8’ by Johann Sebastian Bach, a composer who composed for and entertained wealthy patrons. The lyrical content of this track features anecdotes from friends, family and, of course, my own thoughts. The second verse is accompanied by an instrumental fighting to survive after the Bach piece invades. Eventually the rich music (people) take over and all we hear is harpsichord. Josh McBride — aka Shyboii — produced this track when he was a sophomore at Central High, a school in Louisville’s Russell neighborhood, where gentrification is currently on the cusp.

‘Youth’
‘Youth’ is about making it out of adolescence. It contains elements of ‘Symphony No. 4’ by Pyotr Ilyich Tchaikovsky, a symphony that uses his popular fate theme and correlates with the idea that black youth have their fates chosen for them. After exploring some of the most daunting issues with youth — violence, materialism, and education — we hear two choruses which represent two fates: a somber one sung by blues singer-songwriter Tyrone Cotton, and a bombastic one where I’m shouting how proud I am of the fate I chose. My baby boy, Apollo, sings in the background of the first chorus, giving us a reminder that our youth are all born innocent, and my fifth grade brother, Kamrin, ad libs throughout the verses reminding us that youth are impressionable and their environments systematically influence the fates they choose.

‘Hate’
Hate is an analysis of self and peer hatred. It contains elements of ‘Symphony No. 9’ by Antonín Dvořák, a symphony that introduced American music to itself. Dvořák said ‘The future of this country must be founded upon what are called the Negro melodies.’ He was telling America to look from within as I’m telling our people to look from within. If we hate ourselves we will hate each other, and hatred only breeds hatred, and hatred causes destruction.

‘Decades’
‘Decades’ is a memoir of mass incarceration. It contains elements of ‘Symphony No. 2’ by William Grant Still, the first African American composer to have his music played by and to conduct a major symphony orchestra. This symphony starts with a ‘sorrow theme’ that you hear in many of Still’s other works, and you also hear it throughout this song. The sorrow theme is set up to be played like a broken record, as our plight and continuous incarceration often feels like one. Towards the end of the track, that theme is replaced with what Still refers to as a theme of ‘hope’ played by woodwinds. ‘If you ain’t seen your family in a while, please keep your head up for the trial’ is the first lyric with the theme of hope. The rest of the verse offers hopefulness and ends with a chant ‘Free all my family serving decades.’ The character I portray is a combination of men throughout my life who have been in prison. I added various African hand drums and percussion to keep the character grounded in his roots, so no matter what kind of decisions he makes, his people and culture are always behind him.

‘Unconditional’
‘Unconditional’ is a ballad for mothers and sisters. It contains elements of ‘Nocturne in A-Flat Major’ by Frédéric Chopin, a piece of music meant to be played at night, almost like lullabies. The chorus I wrote is exactly this, a lullaby. And as I reflect on the hardships my mother and sister dealt with, I blame myself for not accepting, protecting and loving them the best I could, while promising to do it from now on, unconditionally.

‘8:30’
‘8:30’ is a reflection of where I am and where I came from. It does not contain any musical elements from other composers, only production from Kojin Tashiro and Kym Williams. We wrote the first half in Tampa, Florida, in our hotel, the night before a performance. We used my cell to record vocals and the television as a speaker. While on the trip, we had a gorgeous view of a nearby bay, and I was feeling grateful being able to travel so much doing what I love. This feeling was clouded and overwhelmed with regret as I realized I’ve never traveled to my home, the country my ancestors were from. The regret worsened not knowing which country that was, and this train of thought inspired the chorus that almost feels random — ‘8:30 in Tampa. 8:30 in Tampa. Where I’m from they kidnap ya.’ It means regardless of the places I travel, the shows I play, the opportunities I get, I’m only in this country because my ancestors were kidnapped, enslaved and forced here, and without forensic evidence from a trustworthy source, I have no way of finding my home. This is also the track where I break through the fourth wall of being a hip-hop artist and actually talk about rapping. Many rappers rap about rapping, so I draw a line in the sand and say I am not a rapper, and if that’s all you identify yourself as, you are not a factor in this fight against our struggle. I wrote the first half in 15 minutes and purposely parodied the kind of rap that is popular today. I spent probably 15 hours writing the second half, being as lyrically sharp as I could be to juxtapose the first half. This final track, and its epiphany of how we got here, ties with the opening one and the kings who fought against our bondage. We too can fight for our own liberation, but first we must be culturally, politically and socially conscious.” •