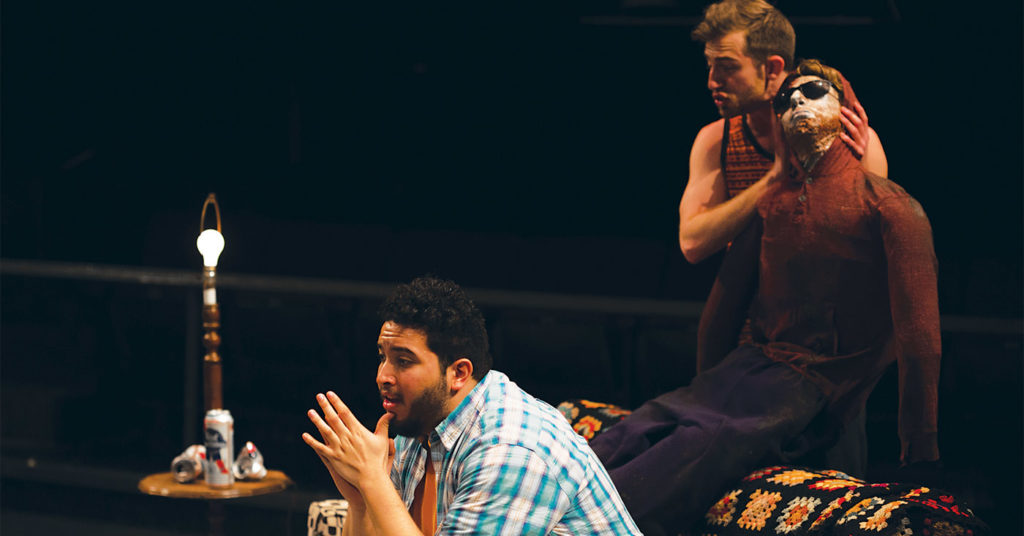 Every performance from this year’s Professional Training Company at Actors Theatre has spoken to something fresh, topical and relevant. So, it’s no surprise that its final production of the season was a festival that highlights the new, showcasing the voices of some of the youngest playwrights in Louisville.

Of the eight high school students whose plays were chosen to be shown in this year’s New Voices Young Playwrights Festival (which closed April 25), some are as young as sophomores, such as Gabe Cora of Floyd Central High School, who wrote “The Wilting,” a 10-minute play in which a married couple listens with dread to the news as the world crumbles around them due to a ruined ecosystem and late-stage capitalism. Although teenagers are often hushed by adults when they make political commentary, “The Wilting” provides a possible glimpse into the future that rings as true as plays five times its length and written by playwrights twice Cora’s age.

Ariana Tulay’s “Misaligned Skies” dispels the stigmas surrounding “unconventional relationships and mental illness” through an intimate portrayal of a father and daughter.

Other plays offered lighter scenes, including Katie Spencer’s “Purple,” in which a woman and a man (Reagan Stovenour and Russell Sperberg) work up the courage to speak to each other at a bus stop, egged on by their consciences (Kevin O’Connell and Laura Lee Caudill). Throughout the performance, Stovenour’s character wears red, and Sperberg’s character wears blue, allowing the title “Purple” to allude to their coming together.

In “Luna” by Maddie Gaughan, two, lonely middle schoolers, Mia and Matthew, become friends when Mia (Amber Avant) demands her bike back after her father sold it to Matthew’s (Josh Fulton) grandmother. Avant plays Mia with the gusto and self-assured cleverness of a preteen sleuth, a little strange but confident in her strangeness, while Fulton’s Matthew is the endearing new boy, longing for friends and a little taken by Mia’s take-charge nature.

One softly bittersweet play is “The Circle of Leaf” by Assumption High School junior Sophie Ice. It chronicles the end of the friendship between a chestnut leaf (Josh Fulton) and a maple leaf (Emma Maltby) as fall comes on, and Chestnut’s color turns yellow, while Maple stays green. Although on the surface it might seem like a cutesy play about leaves and the changing of the seasons, it also deeply understands the emotions of what it’s like to know that you’re losing someone who has been important to you, even if it’s not to death by autumn, but simply drifting apart. Maple clings to Chestnut and denies the inevitable, and Chestnut strains himself to hold on for her. They argue and resent each other, but eventually make up and accept the end, appreciating the friendship they had. The entire emotional arc is covered in the 10 minutes that the play has, with occasional interruptions from stylishly costumed Wind, played by Kevin O’Connell, Ashley Hildreth and Brett Schultz.

“Man of Dance” by Corbin Gravil of the Kentucky School of the Blind is another piece that offers a break of whimsy, in which an awkward, lonely Tom (Julian Socha) becomes tired of dancing by himself and invites “party people” to his home in the hopes of making actual connections. What he finds, however, is that every time he thought he was dancing alone, he was actually dancing with a ghost (Kayla Peters) who scares away the “party people” and finally introduces herself.

Sara Sandfort’s “Sickcom” — a play on the word sitcom — is perhaps the most tonally complex of the bunch. It’s part dark comedy, part thriller and part commentary on the destructive effects of alcoholism and domestic abuse. Framed as a sitcom, it follows Tom (Jonathan Moises Olivares) and his best friend Jerry (Brett Schultz) as they scramble to hide a body that Jerry brought home. As the play goes on, there are subtle hints that Tom knows more about this body than he realizes, until it’s finally revealed that the body is Jerry’s, and that Tom killed him after his girlfriend, Lilli (Rebby Yuer Foster) left him for Jerry.

The PTC not only performed the plays but served as dramaturgs to help revise and contextualize the pieces. They were even on the play selection committee, selecting eight from entries submitted by high school playwrights. The New Voices Young Playwrights Festival lasted only three days, and ended the season for the PTC, but it did spark hope for the future of local theater and the new voices who might one day lead it.