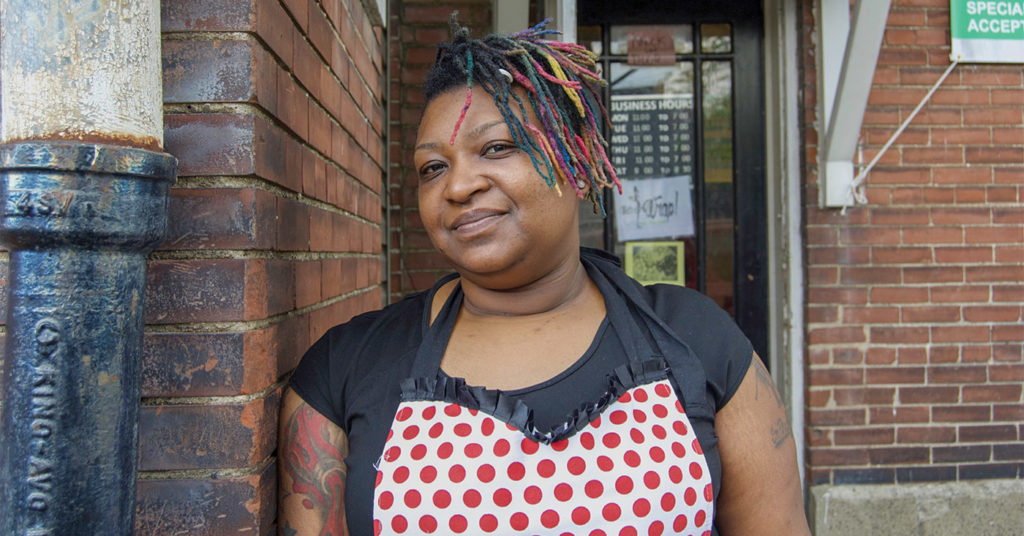 “Last year, on Mother’s Day, I almost died. I was headed to Cincinnati, and my truck front tire blew, and I lost control of the car. It knocked me unconscious, and I was thrown through the window. I was on Interstate 71. From there, I had to be airlifted. I remember bits and pieces. I had six broken ribs, two fractured vertebrae, a broken finger, a broken toe, lacerations everywhere and a head injury.

For a while, I thought that I would never cook again. That was my main thing. It’s what I love. So every day and every week, I would do something different to push myself. When I came home from the hospital, everybody came and brought food to the house, and I thought that I had to cook. I was still hobbling around and trying to cook, and people would have to tell me to sit down. I still cooked. I made myself do it, and people would call and ask me when I was going to get back to it. I started out doing it two to three times a week. I was trying to push myself to try to get back into the groove of things.

Seven months later, I was given the opportunity to open a restaurant here. So far, the three weeks that we’ve been here has been awesome. The support that we’ve been getting has been amazing. I’ve built such a great clientele. People come by just to see the progress of me. You know, they’ll say that I don’t look like I’ve been thrown through a window. It’s been pretty awesome.

My children work here in the afternoons. I want to teach them how to be their own boss, especially living down here in The West End. There’s so much opportunity down here, and you have to get it yourself. So, I have a 14-year-old, and she’s my cashier in the afternoon. I have a 12-year-old son who cleans tables and takes the garbage out, and I have another child who cleans around the area. That’s their jobs. They know that they can strive to be like me and make this work.

We need love put in our food. You can go to any commercial restaurant, but the food is not prepared with love. We have so much processed and packaged food. Everything is freshly cooked here. There may be a wait because we’re preparing it, which is why it’s best to call ahead. I make sure that everything looks appealing. I’m not going to give you something that I’m not going to eat.

It’s a wonderful experience. We have a lot of people down here who are homeless or on drugs, and during the evening, I give out food. There’s no point in holding onto food that we have at the end of the day. It’s pretty interesting meeting different people. It’s pretty dope.

Being down here in The West End is awesome because there are more people like me. It gives you the opportunity to just see yourself in someone else and be able to talk to people because everyone has a story.

My ultimate goal for That’s a Wrap is to have multiple locations. I would like to have a building that not only caters to food but has different outsources, as well. I don’t want to just focus on me. I want to help other people.” •