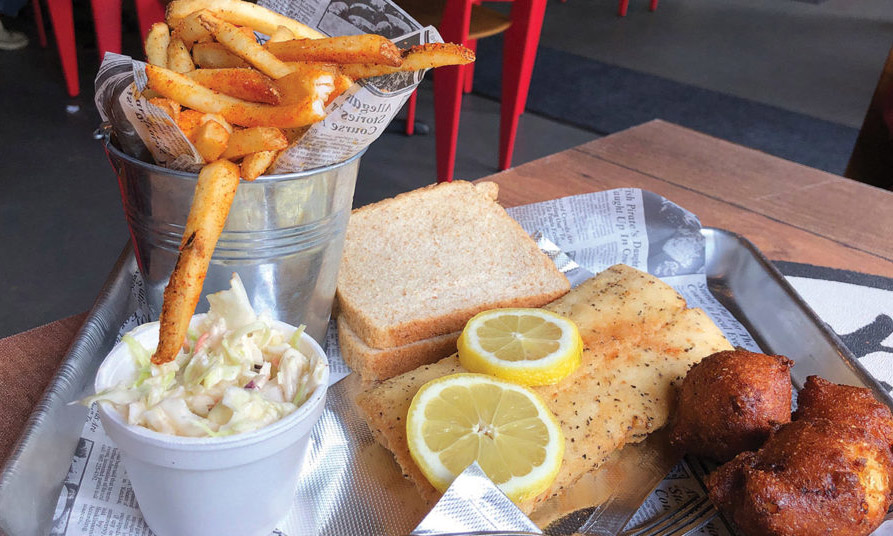 For many decades before the first pizza came to Louisville in the 1950s or the first real taquerias arrived in the 1990s, this town has had a love affair with seafood and fish.

It wasn’t long after the Civil War when Mazzoni’s started shipping fresh oysters up from the Gulf in railroad cars filled with ice; fried fish couldn’t have taken much longer in a city with a large Catholic population expected to consume fish on Fridays. Mike Linnig and his family were selling fish sandwiches out of their produce stand on Cane Run Road as early as the late-1920s; the first Kingfish restaurant greeted the dawn of the Baby Boom in 1948.

Nowadays, there’s a source of fried fish just about everywhere you look, and the latest entry is a good one, too: Please say hello to Hooked on Frankfort.

Sister restaurant to Frankfort Avenue Beer Depot, Hooked is just two doors west, with Patrick’s bar in-between. Hooked has a different, brighter, less-divey vibe than FABD. Large front windows bring in plenty of light; a giant sailfish and a wall-size mural that looks like a giant aquarium enliven the interior.

There’s fried cod and catfish, of course — any Louisville fish house has to have that — but there’s a wider variety of shellfish and finny fish than a lot of Louisville’s many fish eateries have to offer. And it’s as affordable as any, with a fried cod sandwich priced at $9.99 with chips, pickle and white or rye bread included. A fried cod platter, generous with sides, is $13.99.

But that’s not all. A selection of seven apps, many of them salty, crunchy and good for building a thirst for another beer, range in price from $6.95 (for breaded-and-fried mushrooms or onion straws) to $11.99 (for pan-seared scallops in white wine garlic sauce). Soups and salads are $4.99 (for a garden salad) to $7 (for a large clam chowder, which would be mighty tempting on a chilly day).

Like its almost-next-door partner FABD, Hooked offers an abundant beer selection, with about two dozen canned or bottled brews and six on tap. Only a $5.50 Guinness exceeds the $4 mark. A most-basic wine list offers a red, a white or a pink for $5 each.

The first test of any Louisville fish spot, though, is its fish sandwich, so we split an abundant fried cod plate ($13.99) and then filled the table with extra sides.

At the center of the fish platter, a large, 8- to 10-ounce piece of fish cut in a neat rectangle sat on a piece of aluminum foil. It was topped with two lemon slices, with two slices of decent, unseeded, commercial rye bread alongside. The fish was fine, fresh tasting and mild, with a light breading that set it apart from the standard Louisville fish sandwich: It was a light, thin, herbed flour coating, what the French would call à la meuniere. That being said, the coating added little flavor to a very mild piece of fish and the mostly-mayo tartar sauce in a big squeeze bottle didn’t contribute much flavor either. Hot sauce or additional spice would have been welcome.

The fries that came with the fish plate were excellent, thin cut, fried crisp and grease-free. They were seasoned with a spicy dusting that reminded me of Tony Chachere’s Original Creole Seasoning; it was great on the fries and would have enhanced the fish.

Onion straws ($3.95) were crisp and delicious and came in generous portions. Thinly cut strips of onion rings were fried to an appetizing crunch with a peppery kick.

A filling lunch for two came to $34.42, plus an $8 tip for our friendly and attentive server, Lauren.

Noise level: We had no trouble hearing our tablemates, even with the room half full and country rock playing. (Average sound was 71 decibels, the level of normal conversation, with brief peaks to 82 decibels, the sound level of loud singing.)
Accessibility: The entrance and restrooms appear to be accessible to unassisted wheelchair users, but the restroom doors are heavy.