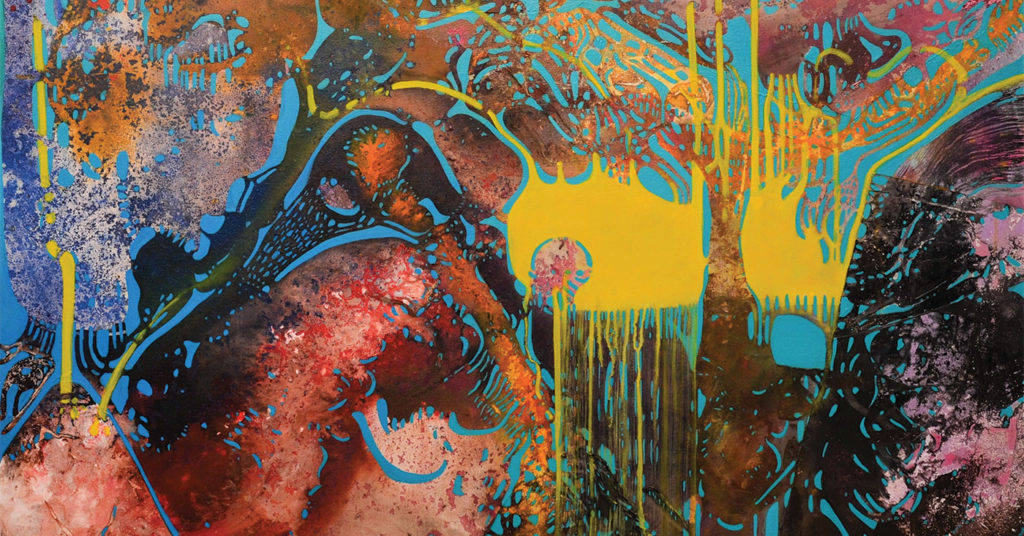 The abject has often been used throughout art history to describe the horrors of bodily waste: excrement, mucus, menstrual blood, the wound. As a term, it means to cast out or down, and as a theory, it can be simplified to refer to the other. Within the thick layers of color and texture of Vian Sora’s newest body of work in “Unbounded Domains,” the abject is forced to dwell in the boundaries of her paintings.

The abjection in Sora’s works at Moremen Gallery grapples with calmer and more subdued areas of color creating a duality of light and dark. Similar to how the other must cling to the periphery of society, we meet the abject pushed to the borders of her compositions.

“Unbounded Domains” presents a series of new works by the Iraqi-born artist, completed, largely, in the past two years. Each of Sora’s paintings fights to contain numerous fluid masses of color that drag the eye across the canvas. Shapes collide and contort against each other as though aching to be the dominant layer. These confrontations serve as the backbone of Sora’s work — both in its technical application as well as the concepts that fuel it.

In the accompanying text at Moremen Gallery, the main descriptor of the exhibition is a focus on duality. Life and death, gardens and war zones, fertility and decay are all contrasting sentiments Speed Art Museum’s contemporary art curator Miranda Lash used to characterize the content of the paintings for the gallery statement on the show.

This dual nature creates a recurring theme throughout the exhibition: a focus on social abjection pitted against a lush, dreamlike and hopeful outlook. Social abjection reinforces the power structures within society and is used to create a norm and give individuals a reason to fear going against it.

Consider the history of redlining in Louisville, contemporary federal immigration bans or restrictions on transgender individuals from serving in the military. These policies implemented by those in power all serve to punish, marginalize and isolate. Society’s most powerful tool is that of repulsion, not attraction, Rosalind Krauss wrote in her discussion on abjection in “Informe without Conclusion,” published in “Theory in Contemporary Art Since 1985.”

Sora’s personal history has put her in a position to paint not just the dual nature of the state, but also to illustrate the state’s reliance on and need for the abject. As an Iraqi immigrant, Sora has witnessed violence and trauma during her time living in Baghdad but has also had to assimilate to life in the United States, to balance cultures and bear witness to the rise of Islamophobia, racism and hate groups. In “Unbounded Domains,” the various histories she has lived are captured and presented in the dual nature of the work — in the violence, the calm, the light and the dark. She is able to capture the state need to marginalize –– but also to contain. To leave just enough that it remains a peripheral threat.

Throughout “Unbounded Domains,” we see areas of light, calming hues pushed and pulled against more aggressive, grotesque areas. To provide narrative, a singular, often fluorescent color is chosen to serve as a focal point and guide. Painted in thin, vein-like form, like the golden yellow in “Citizen” (2019) or bright red in “Enkidu” (2019), the colors maneuver across the works leading the audience away from aggressive and dark areas toward areas of resolution. These qualities, however, remain absent in “Rebel…Escape” (2019) — an image that is perhaps the most violent of the new paintings in “Unbounded Domains.” Here the same deep forest green that offered solace in “End of Hostilities”(2019) serves as a background for a violent clash of bright reds and blacks. Pulling out of the carnage are opaque faces that stretch from the masses of red and black like apparitions, as areas of red pool toward the bottom of the piece. The result is an assaulting work that has refused to marginalize the abject but instead allowed it to cover the entirety of the canvas. An approach that offers a striking counter to Sora’s other compositions.

In “Revolting Subjects: Social Abjection and Resistance in Neoliberal Britain,” Imogen Tyler said: “The disciplinary forces of sovereignty, its processes of inclusion and exclusion, produce waste populations: an excess that threatens from within, but which the system cannot fully expel as it requires this surplus both to constitute the boundaries of the state and to legitimize the prevailing order of power.”

It follows, then, that the abject is required within society for those who wish to remain in power. This is represented in Sora’s work as she captures and often marginalizes the abject within the confines of her canvas, swirling and controlling it with areas of fertility, light and harmony. As within the domains of our cities and neighborhoods, the abject — the waste populations — are marginalized and kept in our peripheral view as a reminder of why we strive to assimilate.

Ruckus is an independent writing and review collaborative that seeks to promote artists, curators and institutions that are committed to visual excellence by way of critical dialogue in Louisville and the region. Read more at: ruckuslouisville.com