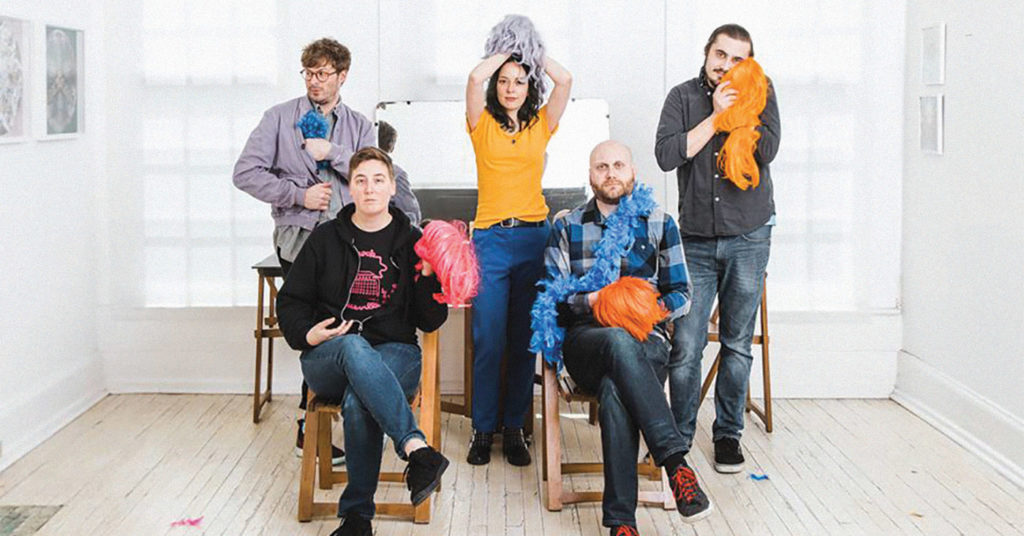 Always upbeat and ready to step outside of the typical rock constraints, Twenty First Century Fox returns with their third full-length album, New Energy. According to them, it’s their “most diverse” record, an expanded sound adopted in the three years they spent refining this 10-track follow up to 2016’s Yr Welcome. Last week, New Energy was released, so LEO caught up with a few members of the band to dig deeper.

Twenty First Century Fox’s energetic pop-rock is driven by their triple-guitar frontline: Miranda Cason and Laura Quimby — who both also sing — and third man Sean Gardner each contribute their own set of six-string tones, while bassist William “Willie” Baumler and drummer Greg Ward keep the groove loud. Their journey as a band spans over seven years, although their relationships outgrow a decade. Their first project together was in 2008 as a B-52’s cover band, suitably called Mock Lobster. After cashing in on a few shows under that name, the desire to produce original songs reached its peak. And by 2011, Mock Lobster morphed into Twenty First Century Fox, placing guitarist/lyricist/singer Cason in the front.

“Playing in the cover band, it is really, really fun, and you get a wider audience of people who know the songs, so they’re a little more hyped,” Quimby said. “But artistically, yes, we do get more out of TFCF.”

When you know the members of TFCF were once singing the music of the B-52’s, you can’t help drawing subtle connections between the two. But, reproducing the same sort of sound was never an interest to them. After writing and recording one EP (Guitars, Guitars, Guitars) and two albums (Pet Rounds, Yr Welcome), the band collectively decided their next record called for change. This materialized one night in 2016 during a routine rehearsal at the Logan Street Music Studio. But instead of practicing, they took a hard look at their surroundings. Putting aside their instruments, they began to rearrange their longtime practice space with an intention to arouse fresh vibes within the setting they’ve known too well. This simple, seemingly innocent act of feng shui would be the starting basis of their forthcoming record, New Energy. But it would take a few years and a few extra methods to get there.

Recorded at the renowned La La Land studio, New Energy produces exciting sonic avenues for TFCF, most notably on the track “Willie the Gimp” with its delayed drum beats and lovely interwoven guitar melodies. Apparently its working title was “Michael McDonald Song,” but it sounds nothing close to McD or the signature Doobie Brothers bounce. Another last-minute addition was the use of a talk box on tracks “Satanic Panic Part Two” and “Who’s Flying This Plane,” which Quimby happily embraced for embodying different character monologues. She and Cason contributed keyboards throughout the record, as well.

Cason, who’s known to write most of their lyrics and melodies, added that each song is its own case: “I will sit with the melodies until the words come to me — sometimes it takes a while,” she said. “A few lyrics are spontaneous. ‘Who’s Flying this Plane’ and ‘Rats in the Cellar’ pretty much wrote themselves. Sometimes I will see an image on a poster in the room that sparks an idea. Or I will hear something the others are doing and think, ‘That sounds like a dance party around a fire pit.’ There’s often a little bit of social critique or observation. I write words of advice to my younger self and self-assurances for myself and others for tough times.”

TFCF never hesitates to acknowledge when it’s time to take an alternative route. Always changing and always reaching for the next idea, Ward concluded: “The more and more I listen to us, the more and more I just want us to go in that late ‘70s, early ‘80s kind of post-punk, new wave direction… It’s fun just to hang out with these guys, if we’re able to do it in any capacity.”