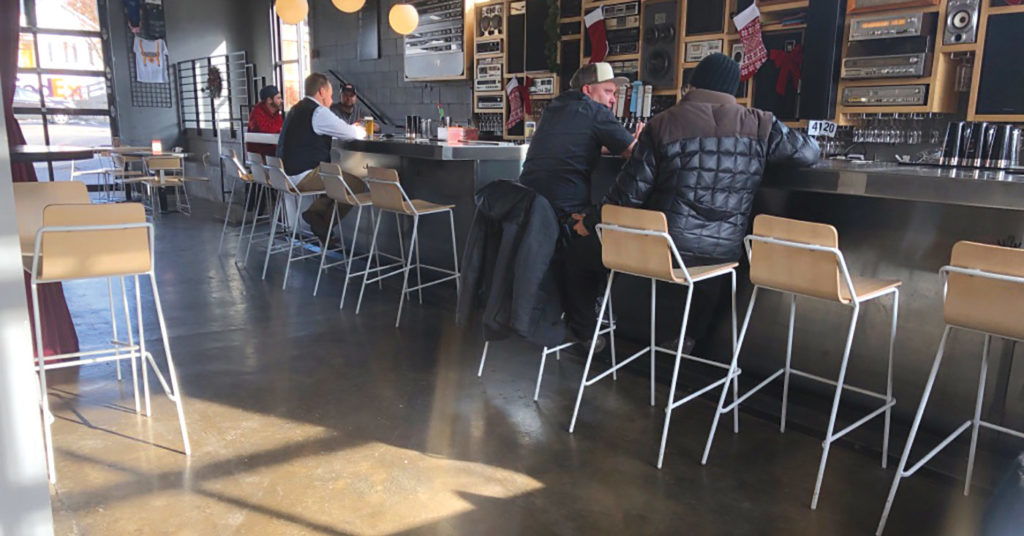 Brewery taprooms are designed to be inviting places where friends and the community can come together to celebrate or to simply meet and drink beer. They are unique in that they offer one-of-a-kind products and ambiance under one roof. Increasingly, groups, companies, families and wedding parties are booking rooms, local breweries report.

Perhaps the most recent, most-publicized example was at Goodwood Brewing Co., which Gov. Matt Bevin’s gubernatorial campaign rented for a fundraiser, the brewery’s owner told LEO.

Goodwood is one of many breweries in the city that offer space for rent. According to its website, Gravely Brewing Co. offers six different event packages ranging from $150 to $2,500 (per hour) depending on the day of the week and room needed to accommodate between 30 and 300 people.

“It’s our go-to place in the neighborhood,” said Grisanti. “They have some of our favorite beer and food in the city, so we knew both would be great for our guests. We’ve always loved the ambiance of the space so we knew it would feel very ‘us’ and very homey. And as an additional plus, my gift to my groomsmen was a growler etched with their name, so they got to fill that up at the end of the night.”

Monnik’s owner, Brian Holton, said that spring and autumn are extraordinarily busy months for the brewery’s upstairs event space due to weddings and rehearsal dinners. And other than dealing with the occasional bridezilla, events don’t seem to present too many challenges.

“Every event is custom, so there’s a certain challenge in that,” said Holton. “Sometimes people have very specific requests and needs. We have to make up rules as we go sometimes. For example, we don’t let live music happen before 9 p.m. because it can interrupt dinner service. That’s a boundary we set up.”

There is a financial benefit to all of this. Holton said that in 2018, Monnik saw a 17% to 20% increase from the previous year in food sales based on the private upstairs space’s use. “Last year we really started to promote our event space.”

Nathaniel Gravely, Gravely’s founder, told LEO that he loves that his brewery is used as a way for people to come together and joked that he might want a bigger space someday.

Jason Smith of Gordon Biersch Brewery Restaurant, located on Fourth Street, said he believes this is the case, especially now in Louisville.

“Private event space is important because of the new downtown Louisville lift and for the Convention Center opening back up,” said Smith. “A lot of these visitors do private events. Gordon Biersch hosts probably 150-plus events per year between corporate functions, bachelorette parties and more.”

Gordon Biersch, much like Gravely, offers a “Buy Out” package. For those who need the space, groups can reserve the whole restaurant, as long as a previously determined food and beverage price minimum has been agreed upon, depending on the day of the week. Of course, other options are available.

“Right now, we’re challenged with the space available,” said Smith. “It’s the addition of conventions. It’s a great niche and those that have the room, it’s a great market to tap — especially with the growth of tourism in Louisville right now.”

Smith said his goal is to one day see 10% of Gordon Biersch’s revenue come from private event bookings.

If a brewery isn’t necessarily set up for private event space, that’s OK — as long as taprooms are welcoming and comfortable. From a community standpoint, Louisville taprooms are often happy to serve as a meeting space for organizations, business associations or professional groups.

“I didn’t feel a need to do formal monthly events,” said Candace Jaworski, president of LDA. “Our meetups with a topic of discussion allow folks to casually get together while solving problems, and over good beers. Mile Wide just seemed like a natural, because they’re in a great location, have ample parking and seating, and, of course, great beers.”

The taproom should always be an intimate space to meet, chat and, hey, maybe drink a great beer.

You had me at doughnuts and beer

Beer drinkers and their mothers looking for Mother’s Day plans can head over to Mile Wide Beer Co. at 636 Barret Ave. Sunday, May 12 from 3 to 4 p.m. for a special doughnut and beer tasting. Hi-Five Doughnuts at 1011 E. Main St. is providing the doughnuts for this ticketed event. You can sample Brut Rosé, Kentucky Lily Quiet Science, McPoyle Milk Stout and Lucille, a special Mother’s Day Imperial Wit. Each pour will be accompanied with a Mile Wide Hi-Five Doughnut. Tickets are $18 and can be reserved by calling Mile Wide at (502) 409-5584.

Southern Indiana residents no longer need to travel to Louisville to experience Goodwood beers. The Louisville brewery has opened up a new brewery and concert venue at 134 Spring St. in Jeffersonville, Indiana.

The new space also will feature what a Goodwood press release called “an R&D brewery system that will enable Goodwood to produce a full spectrum of beers.” The brewery says it will produce “cutting edge IPAs, sours and stouts, as well as variations of classic lagers, ales, hefes, barley wines, and numerous others.”