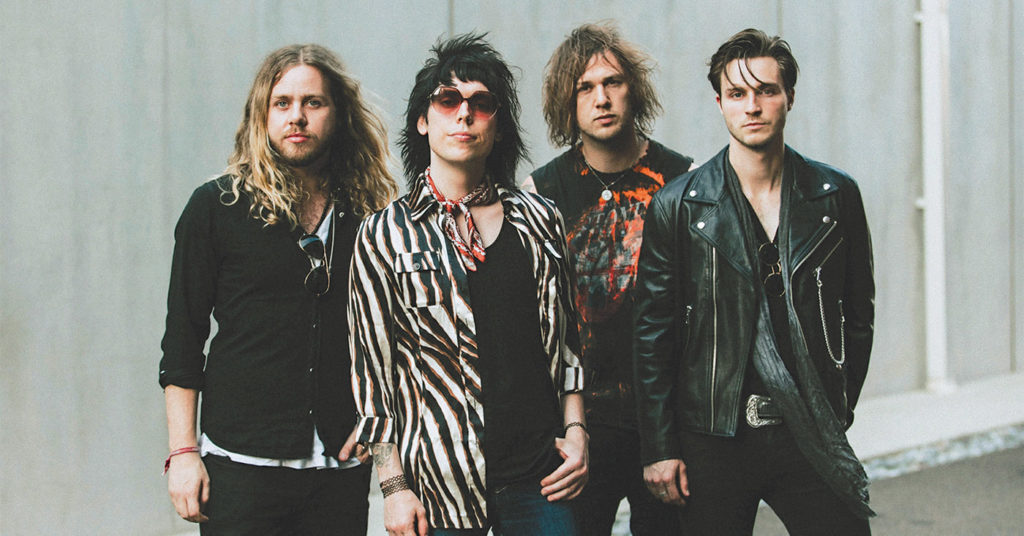 It’s no secret that guitar-driven music has been existing in a state of exile on the pop charts for the past decade and a half. And, while that may never change, given how the landscape of the music industry has shifted, it’s apparent that The Struts haven’t received that particular pop culture memo.

Formed in Derby, England, in 2012, this British quartet plays with a sound steeped in the glam of Queen and Mott The Hoople, while affecting the good-time swagger of The Faces and Rolling Stones. With the recent release of the band’s sophomore bow, “Young & Dangerous,” it’s an approach they’ve only doubled down on in the studio and definitely onstage, particularly given that the foursome are now headlining a string of U.S. dates, according to lead singer Luke Spiller.

“The tour we’re about to go on is going to be absolutely fantastic. The band has never sounded tighter and the show has never been this big. It’s definitely a place where people can leave their egos at the front door, walk in and enjoy themselves,” Spiller excitedly said in a mid-April phone interview. “I’ve always been a firm believer that if the kids and people are buying tickets, I want them to be entertained, which is definitely going to happen. There’s going to be a lot of singing, dancing and clapping. When you have that, alongside great music, it’s a recipe for a fantastic night. Unforgettable, energetic and just sublime.”

On the baker’s dozen-worth of songs that make up Young & Dangerous, The Struts unabashedly echo many of their influences. The thumping “Who Am I?” somehow fuses the cheekiness of “Da Ya Think I’m Sexy?”-era Rod Stewart with a Fitz & the Tantrums groove, while “Fire, Pt. 1” opens with a swath of harmonies that lend it the kind of vibe you might have gotten had ABBA been bitten by the glam-rock bug. Elsewhere, big choruses and riffs are punctuated by Spiller’s exemplary falsetto on the anthemic ode to narcissism that is “In Love With a Camera.”

Also notable are “Tatler Magazine,” an ear-worm brimming over with Freddie Mercury-like brio and Brian May-kissed riffing and “Ashes, Pt. 2,” a swath of jagged pop that somehow manages to wrap Jim Steinman-esque grandiosity with a coda swiped from “Baba O’Riley.” Sandwiching it all is “Body Talks,” a cherry-bomb of a track reminiscent of Jet’s “Are You Gonna Be My Girl?,” with the second version of the former finding Spiller duetting with Kesha. It’s all part of how the vocalist would describe The Struts to the uninitiated.

“We include homages to all of the greats — whether it’s Queen, the Rolling Stones, Oasis, David Bowie — just to name a few. We kind of have this fantastic melting pot of all these influences that we unashamedly love to wear on our sleeves,” he explained. “But at the same time, The Struts are not just here to regurgitate a specific genre or band. We’re here to kind of make sure we present something that people can say they like because on some levels it reminds them of some of their favorite bands. We’ve always aimed to push the genre into new spaces that it hasn’t been to in quite a while or hasn’t been to ever.”

The band’s willingness to throw themselves into the deep end of the rock-‘n’-roll pool not only found The Struts opening for The Rolling Stones in Paris in 2014, long before releasing any music, but later nabbing opening slots for The Who, Guns N’ Roses and the Foo Fighters. Along the way, Spiller was tapped to be the vocalist for Man On the Rocks, a 2014 solo effort by Mike Oldfield, best known for 1973’s “Tubular Bells,” which was used as the theme for “The Exorcist.” The success of Spiller’s work with Oldfield provided an unexpected springboard for his band.

“That came at a really crucial time in the band’s career. In all honesty, there was not a whole lot going on for us in the UK. As a group, you’re always thinking of and looking for new ways to expand your horizons and get your name out there. Funny enough, the whole Mike Oldfield album happened very organically. It kind of fell in my lap. I was put forward as a vocalist that was meant to sing or try out to sing just a few songs. I went to Battery Studios in London, where I met producer Steve Lipson, who was doing the record. I sang about two or three of the songs. About three weeks after that, I got a call from Stephen and he said Mike loved my voice and he wanted to do the whole album with me,” Spiller said. “It was very cool and was definitely one of the highlights to finish the album in the Bahamas, where Mike lives. I learned an awful lot, especially working with Stephen. He had an incredible way of making me work my voice in ways that I probably hadn’t done before in terms of dynamics and what-not. Funny enough, I will tell you that any place where my voice is properly showcased other than with The Struts, is probably that album.”