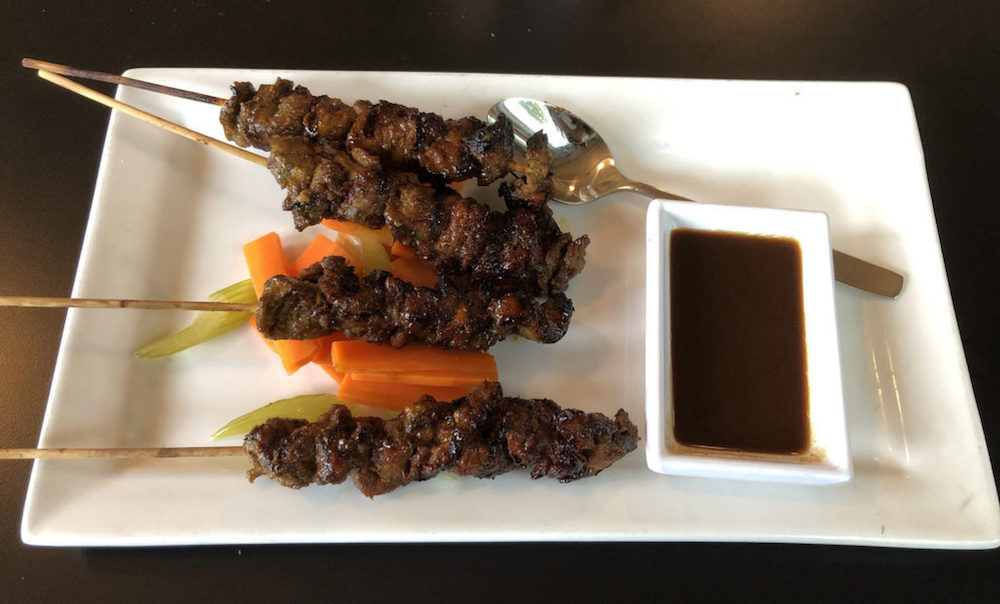 “Nobody goes there any more. It’s too crowded.” Yogi Berra purportedly said that, making the aphorism famous, even if he didn’t say it first. Now, I want to take an unlikely shot at similar fame with this Yogi-style observation: “I go to August Moon so often that I haven’t been there lately.”

OK, maybe not. But it’s true sort of. I like August Moon. I end up there for lunch, dinner or a drink every now and then. It’s welcoming and comfortable, stylish in its austere, modern design. Its mix of Chinese and Southeast Asian fare with a distinct flavor of Malaysia can’t be found anywhere else in town.

So, when my editor suggested that I ought to review August Moon, I was all, “Nah, can’t do it. Too soon. I reviewed it just a year or two back.”

I checked the archives, and dang! My last published review was in 2007, as a matter of fact, and the last before that was in 2002, right after Chef Peng Looi’s fine eatery moved a couple of doors west on Lexington Road into its spacious new quarters.

So now, a dozen years later, it was time to review August Moon again. The scene hasn’t changed much over all those years, and there’s no reason it should.  The main dining room is spacious and lofty, with exposed metal rafters supporting a light tan ceiling that slants up to a high peak on one side of the room.

The dinner menu’s appetizing pan-Asian mix starts out with about 20 soups, salads and “first flavors” small plates or bar bites. Pricing in this category is attractive, ranging from $3 (for egg drop or mixed vegetable soup) to $9 (for each of three chef-driven salads featuring tiger shrimp, ahi tuna or lemongrass-scented chicken). The dozen first-flavor dishes are almost all $8 or $8.50.

More than 40 dinner entrees are subdivided among signature dishes, seafood, chicken, beef and pork, veggie, stir-fries with ginger and garlic, Malaysian-style curries and rice or pasta dinners. All entree prices fall between $10 and $20, making August Moon one of the more-affordable, fine dining eateries around.

The bar program offers an impressive list of bourbons and a good choice of other liquors and craft beers. A good, fairly priced wine list offers most of its 100 bottles from $20 to $50 for a bottle, $5 to $10 for a glass.

We shared a couple of first flavors and a pair of entrees and, even with the small plates to start, had a hard time finishing it all.

A single spring roll ($2.50) looked as big as a baked potato and boasted a crisply fried, golden-brown crust. It proved to be enough for two. It’s available with finely chopped chicken or all-veggie; the veggie version was filled with finely shredded cabbage and a distant whiff of five-spice. Small metal cups of vinegary-spicy red duck sauce and sinus-clearing hot mustard made welcome flavor boosters.

Bite-size chunks of beef satay Indocine style ($8) were coated with hoisin sauce and grilled well done, speared on four skewers and served atop rectangular-cut bites of crisp, quick-pickled carrot and celery. The menu described them as flavored with lemongrass and five-spice, but to be honest, we could not discern those flavors in the dish.

Bland flavors diminished ground lamb with Japanese eggplant and fresh basil ($15.50), too. To its credit, it was a bountiful serving, and it came with a side bowl mounded high with fine white. cooked a bit on the sticky side to accommodate chopsticks. There was nothing actively wrong with the dish itself, but it just left us wanting more flavor.  Thin slices of small, white Japanese eggplant had been cut vertically into long, thin, ovals, then cut in half lengthwise. The lamb appeared to have been beaten paper-thin with a tenderizing hammer but wasn’t fully ground. The meat was so mild in flavor that we weren’t sure whether it was lamb or beef at first, and the scant, sweet brown sauce that lightly covered the dish further obscured its flavor. Again, it wasn’t bad, it was just mild verging on boring. There were also a few pieces of onion and three or four tiny, flavorless bits of basil.

Malaysian-style curry ($12) packed enough flavor for both dishes, though, and if that flavor was mostly strong curry powder, I didn’t mind. Good-size squares of pressed, fried tofu were served with bright stir-fried squares of green pepper and onions and crisp water chestnut rounds, swimming in a potent, brown curry sauce that went very well with the rice.

Noise level: Even with conversations at tables nearby, hearing wasn’t a concern during dinner.. (Average sound level was 71 decibels, the level of normal conversation.)

Accessibility: The dining room and rest rooms are accessible to wheelchair users, but the front doors are heavy.