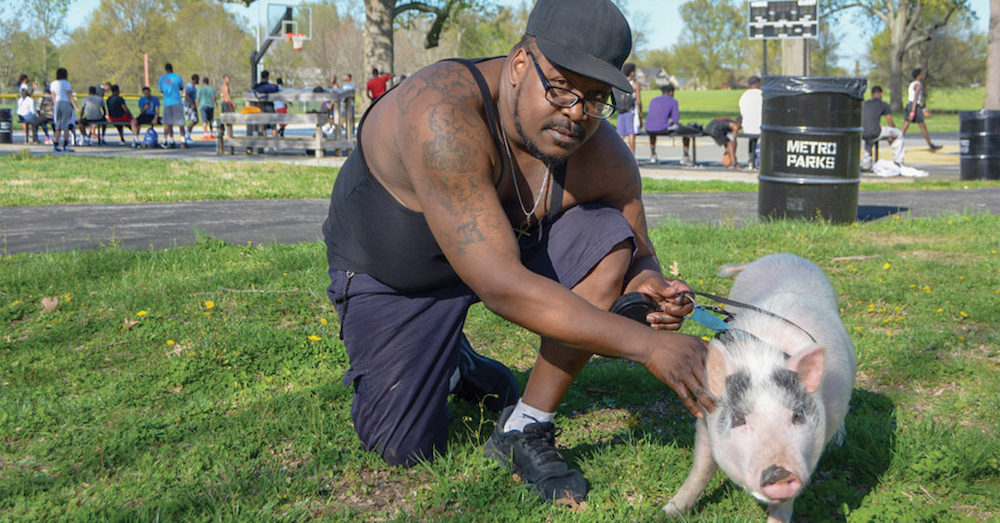 “Everybody looks at me weird because I’m a black man in the hood with a pig. I done had every animal before. This was just the next step. They’re just like dogs. You can potty train and teach them tricks. It’s something different. I’ve been having pigs for about three years. Most people think that they’re real hard-headed and stubborn, and they do at times. They’re pretty smart.

I got a friend whose pig rings a bell when it wants to go outside. He does it all. He’s potty trained and goes in the litter box just like a dog or a cat. They’re very intelligent. They’re not dirty like everyone thinks they are. Everybody thinks that they’re just filthy, and they’re not. They like to get dirty from time to time, but they’re pretty clean. They’re good. It’s just a different experience. Read up on them and check it out. You might end up liking it.

Make sure you do your research. Some people are out here selling real live hog pigs, the big ones. Make sure you get a pot belly or a small one. I’m about to get my license, so I can start breeding them. Most of us don’t know much about it, or how to get them, so that’s a business that I’m thinking about starting. People can learn about pigs and eventually will want to raise one.”

“I’ve been here for 14 years. I was 4, and I’m 18 now. The River City Drum Corp has made me a totally different person than what I would have been. I’m more responsible and better at getting stuff done. I know that real life has consequences, and there are rewards to good things that you do. It taught me how to be an adult. The biggest lesson that I take from RCDC is that if I don’t get my stuff done, I won’t be able to have fun. It’s all about responsibility.

Drumming is my passion, it’s what I do. If I was to drop everything and forced to choose one thing, it would be drumming. I’m just naturally good at it, and it’s what I love to do. I get to reach others through it. I get to teach all the kids and the older kids and make people smile. I wanna make people smile and dance. We’re just doing good stuff over here, especially with the drums.

What’s next? I’m going to college. I want to go to Tennessee State University. Hopefully, I’ll get to play there. I’m waiting to hear back about scholarship stuff. I’m going to get my degree in aeronautical and industrial technology. It has to do with aviation and airplanes.

As far as drumming, I won’t do it professionally, but I will definitely come back to Drum Corp to help teach the younger kids coming up and make them better. I want all of them to be better than me, and they can come back and teach and keep it going. That’s what somebody did with me. Alumni came back and taught me so much stuff that I didn’t even know. I plan on going to TSU and learn new stuff and will come back and help make the kids better, so they can make somebody else better.