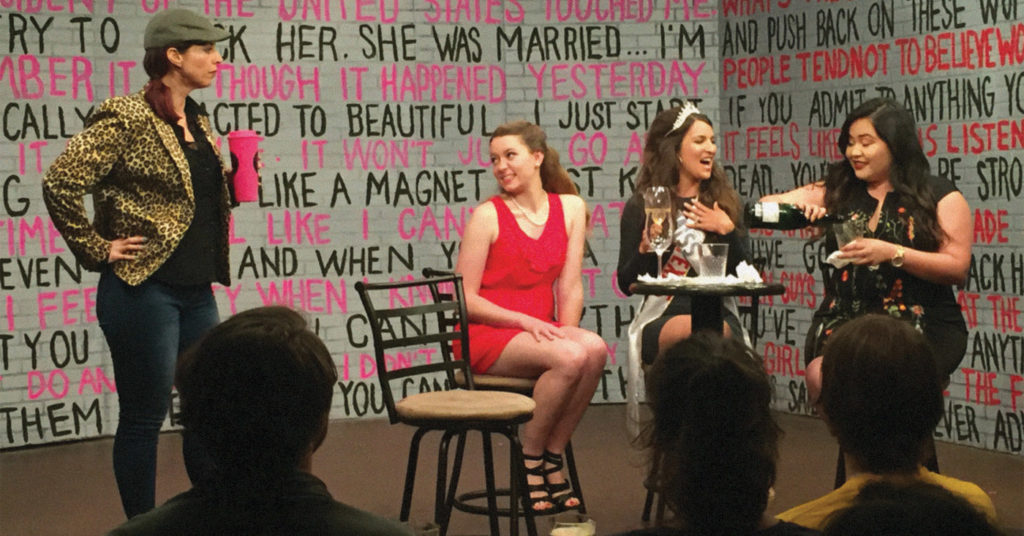 As soon as audience members make their way into the crowded second story room at The Bard’s Town, they see a wall of words across the back of the stage. In large black letters there’s a snippet from an interview that’s become all too familiar in the past three years: “I moved on her, and I failed. I’ll admit it. I did try to fuck her.” Just looking at it, my stomach sinks.

But underneath every line in black are quotes in bright pink: “The President of the United States touched me.” “Why do I feel guilty when I know I am not guilty?” “I remember it as though it happened yesterday.” And it’s these words, though perhaps less familiar, that stand out. It’s these words that form the basis of Eve Theatre’s production of “The Pussy Grabber Plays,” a series of eight, short plays about the women who spoke out about sexual harassment and assault perpetrated by Donald Trump, now president of the United States.

“Four Beauty Queens Walk Into a Bar,” the first play, runs the emotional range, from cleverly delivered jokes and entertaining characterization to moments of gravely sinking into the reality of the situation. Set shortly before the election, it ends with all the characters declaring, “He won’t win… he can’t win… can he?” A refrain that many of us remember too well.

It’s a subject that can be rough for us, especially given the relevance, but the plays offer a mix of paces and styles that keep the audience entertained without making light of the truth of it.

Some are musical numbers. “The Interview,” written in part by Natasha Stoynoff (portrayed here by Joy Beth DeWitt) about her own experiences with Trump, includes a near-operatic number with a cathartic amount of “Fuck yous.” (Also cathartic is the knowledge that proceeds for the production go toward Planned Parenthood.)

Others, such as “Jessica,” which shows Jessica Leeds (Susan McNeese Lynch) preparing for her interview with Megyn Kelly (Julia Kean), lean toward absurdist dramatizations of what can be found behind the scenes at MSNBC, as well as poking fun at Kelly and the downfall of her career.

Other plays are simpler in concept but more intimate in nature. “Sat Nam” shows Karena Virginia (Leila Toba) with her mother (McNeese Lynch), exploring the generational burden of violence against women and the way that women are discouraged from speaking out. Though McNeese Lynch is in two plays as well as serving as the producer of the show, it’s in “Sat Nam” where she shines, as her prim, private and somewhat pushy character of the mother goes through a full transformation over the course of a few minute play.

“Rachels” shows a similar situation of a family member, in this case a Loving Boyfriend (Ryan Watson) comforting Rachel Crooks (Kean) in the midst of painful flashbacks without quite understanding how to help. But more importantly, it shows three versions of Crooks: one as a young receptionist at Bayrock Group who says Trump assaulted her (Gracie Taylor), another as a still young woman years later trying to live her life and another as an adult deciding to run for state representative (Jody Held). These past and present versions of Rachel comfort each other and strengthen her resolve.

Even “Miss USA,” a musical piece in a hospital setting portraying Samantha Holvey’s (Jessica Sharpenstein) diagnosis with Guillain-Barré Syndrome, ultimately comes down to two characters — Sam and her nurse, Mo (Scout Larken) — both tired and emotionally worn down but finding strength in each other and encouraging each other to keep fighting.

“Troublemaker” shares the story of Jill Harth (Monica Turner) from her own perspective, discussing her allegations of being harassed and assaulted by Trump and her determination not to be a troublemaker despite all that… until Trump’s legal team boxed her into the role. Through the piece, she interacts with a woman named “Luanne,” who she says is not one woman but several women on Trump’s staff. Names are never named, but contextual clues can lead the audience to guess.

My favorite of the night was “Credible Woman,” a play “based on the women who haven’t come forward.” It portrays a protagonist named Han (Brenda Moran) who goes through a theatrical performance to express her cognitive dissonance — why she feels guilty for not coming forward, even though she logically knows she did nothing wrong. She calls an assistant (Brandi Hornbuckle) onto the stage to help her. But then the script begins to deconstruct, taking down the fourth wall piece by piece as the assistant points out that not only are none of the guilt-filled conversations Han’s anxiety created real, but neither of the characters in the play are real — that Han is being portrayed by an actor based on a script that she didn’t even write. It’s a messy but haunting and completely accurate portrayal of the countless stories that went untold, which might be the most unnerving thing of all.