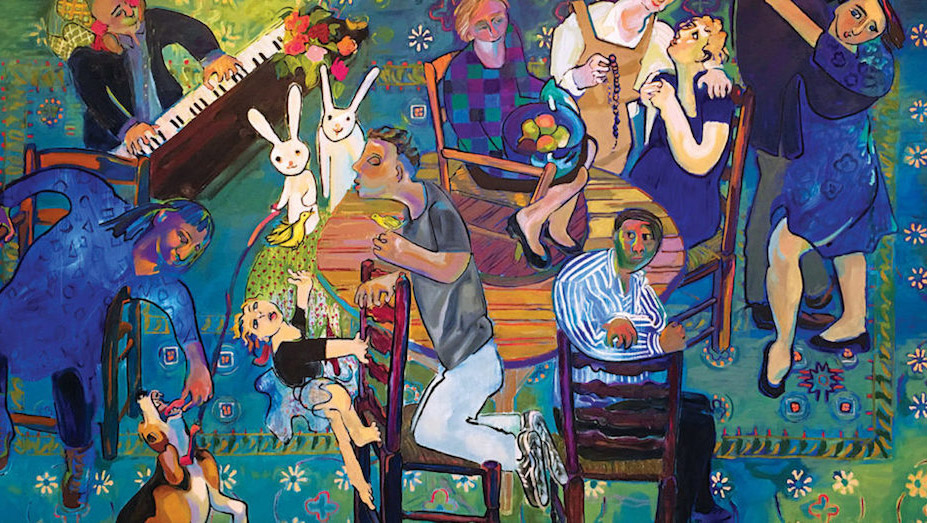 In her artist’s statement for her exhibit “lazy susan,” Joyce Garner says her “hope is [that] there is room in each painting for a connection to flicker … ”

She is interested in communicating, via her oil paintings, her story and the stories that surround her. This is reflected in the subject matter offered, ranging from immigration and downsizing to childhood parties and cravings.

In the titular piece “lazy susan,” which is 77 by 114 inches, a somewhat centrally located female figure is seated in a chair atop a lazy Susan, holding a basket of fruit, suggesting nature’s bounty. This figure, described by Garner as an artist in disguise, is surrounded by an array of activity. However, the world is not revolving around the artist, rather she changes her line of vision while simultaneously remaining stationary. She is, in essence, the center of the spiral, and her scope expands as she spins. The background is flattened by a floral pattern, giving the surrounding figures a feeling of floating. The piano player in the upper left of the large composition provides the music for the dancing couple on the right, one of whom’s face is obscured, lending mystery to the dance. An unsmiling, seated figure in the foreground, wearing a striped shirt, arms folded in, is gazing to the right, beyond the picture plane. While the figure is self contained, his energy is not. A child climbs the chair, which another figure is kneeling on. Yet another figure bends down from her seat to interact with a dog whose tether is held by rabbits. The activity, presence of animals, music, dancing, food and several figures suggest that this is a party or a picnic. The artist is contemplating the rich assortment of stories, possibly looking for connections. Ultimately, by communicating what she sees, the surrounding events become part of the artist’s story by extension.

“Violin” is a more visually restful composition on a 5-by-4 foot canvas. Garner shares that this piece is about the day finishing. The comparatively smaller canvas is divided almost in half diagonally, with calming blue water on the left of the canvas. The right of the canvas is filled with nude figures by the shoreline, contemplating the water. One crouched figure is dipping in a toe, while another prepares to dive in. The figure behind the diver has their head bowed and eyes closed suggesting fatigue and the very human need to rest. Other figures embrace, while another holds a violin. A dog barks out at the water. The activity presented in this composition is gentle and affectionate. The frenetic energy of, for example, the multi-patterned “lazy susan,” is replaced through the use of broad, painterly strokes of analogous colors. The more simple composition, the allusion to quiet in the unplayed violin and the ritual of washing away the day harkens to settling down into evening.

The almost monochromatic chartreuse “proper footwear” depicts a figure climbing a tree, ensconced in nature. The vertical composition, on a 92-by-55 inch canvas, conveys a sense of climbing and height. The figure, centrally located, is wearing a horizontally striped garment which flattens the form and blurs the depth and boundaries of the planes. Tree limbs and human limbs emerge from the color field with mass that is created by painterly strokes. The tree bears fruit, offering small touches of contrasting color. This composition is saturated with light, evoking summer and warmth. The tree climber is wearing hiking boots, an allusion to caution as “falls can be a great concern.” The sun forms a halo around the head, which is looking up. The circle of the sun encloses the head and draws the viewer into the world and thoughts of the figure, suggesting that not all falls are physical. In contrast to “lazy susan,” this piece is introspective. The figure is the focus of the story, rather than the observer of other’s stories and the artists’ internal life becomes the narrative.

Garner uses paint and canvas to connect with her environment and to communicate those connections. Her rich color palette initially draws the viewer into the works, and as the large canvases are explored, a vast vocabulary of technique and symbolism is revealed. A single figure may have a beautifully rendered sense of mass composed of complex colors and brush strokes. Interplay between the picture planes is created by the use of pattern, broad paint strokes and flattened perspectives. Recurring symbols such as dogs, birds or tables offer clues about the significance and setting of the story. We, the viewer, are given constant opportunity to connect, and we are invited to spend time finding those connections. •