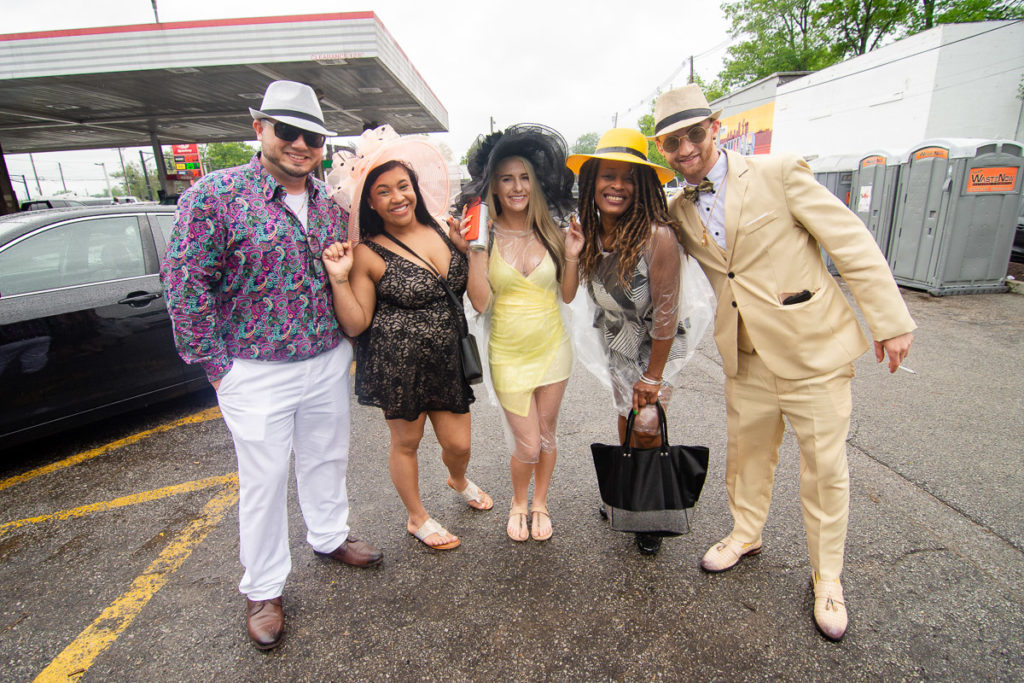 Every year, friendly faces greet you on the walk into Churchill Downs, as area residents and others sell food, clothes, rides and other items. Hanging out in the surrounding neighborhood is a good way to get quality barbecue and hear interesting stories. This is who we met this year.

“Riding my China Hog, baby! 2019! Got the China right there. Have to fix the Hog, haha! You see those authentic saddle bags. I taped the front with black tape to make it look like fire but it just looks more like the [Cincinnati] Bengals, you know what I’m saying? So I’m gonna peel that shit off. I’m a Raiders fan.”

“I am selling hats. …I do it every year. I’ve been doing it for the last three or four years. My sister makes the hats. Personally. By hand. Me and her, we both do it. She’s been in hat shows and all of that. She designs for a particular celebrity but we can’t say her name, but she designs for somebody big.”

“I’m having a little art sale. Enjoying the Derby. First time in nine years I haven’t been, so I’m staying home and just enjoying it. The rain sucks, but what the heck. I sort of just retired myself a bit and decided to paint.”

“I’m trying to park some cars! It’s been very slow this year because of the way they fenced everything off. The fences are only open at 9th Street, 6th Street and 4th Street, so we’re not getting as much traffic through our neighborhood as we normally would, so it has been very difficult parking cars and me being down at the end of the street, everybody undercuts me up ahead. Anyway, it’s fun. I’ll be watching the race later. I have $80 worth of bets and I hope I get $80 plus back.”

“We’re just hanging out. Can’t go very far with the way its all blocked off with the security and all that, but you gotta have it with what’s going on in the world today. You just can’t take that chance, but we’re having fun. That’s the key to it.”

“Another year of Derby. Wish this rain would quit. Yesterday was awesome and Thurby is the new Derby, really. …Something special this year that makes it different is the first one where we lost my dad [last year] so this is my dad’s hat that he wore to every Derby. He grew up in this house with Hank. They were brothers and we’re keeping that tradition going.”

“We’re out here trying to sell some ponchos. [Business] is great. Especially because it’s raining. We started selling — well he started selling this morning around 7 a.m. — I just got out here. He’s been out here most of the day.”

[Hector] “We’re selling tacos for Derby to make money because everyone likes money. Everyone likes tacos, too!”

[Tina] “My Derby is going amazing. It’s been great. People have came down for it. Normally, I’m cooking and what not, but this year I’m just out and about in it. Its been fantastic.”

“My Derby has been fantastic. It wouldn’t do any good to complain. Fabulous outfits and fabulous people. It’s Derby! I’ve lived in Louisville my whole life and I love it. I’m selling bottled water, flip flops, ponchos and glow sticks.”