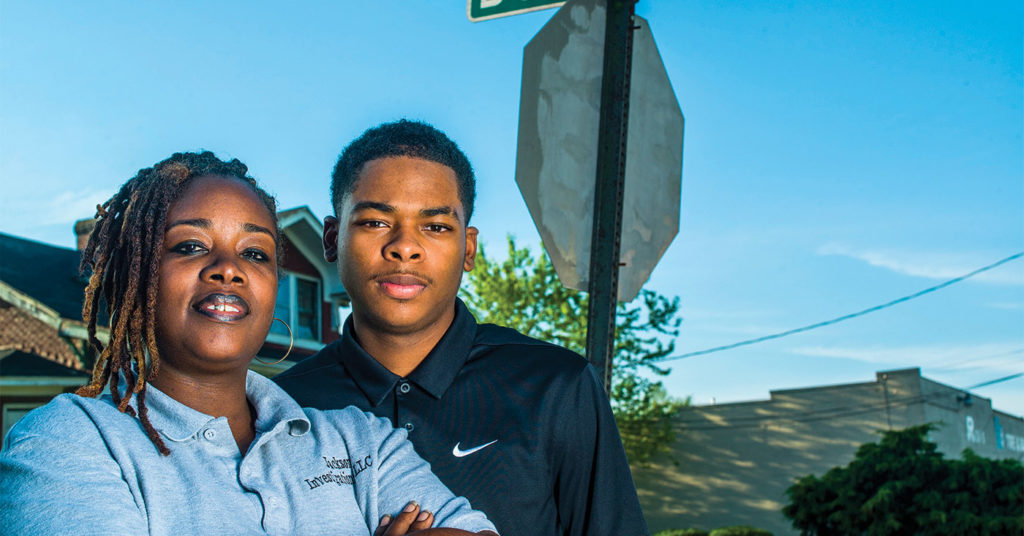 You might say that everything in Tija Jackson’s 47-year life had prepared her for an evening last August when her 18-year-old son Tae-Ahn Lea phoned her during what should have been a routine trip to a convenience store for a slushie.

A single mother of four children, a private investigator with years of experience working with and in law enforcement, a seasoned athlete with an eye for both detail and the big picture… all would come into play, and did, after Tae called her from the store.

In the first call, he said he thought the police outside the store were watching him. She told him he wasn’t doing anything wrong and to come on home.

She knew her son.

“A good learner,” she calls him.

They’d been over this before. She had raised him to respect others, to be aware of his surroundings, to walk away or to call her if he sensed trouble.

And that’s what he did.

When he called right back and said the police were following him, she told him to just do what he was supposed to do and not to worry.

“My gut told me something wasn’t right,” she recalled — and so she called her son and told him to put her on speaker phone. “I wanted to hear everything they had to say, and I wanted to make sure he was safe until I got there.”

Which is how the lives of Tija and Tae have intersected with those of untold numbers of Louisvillians and beyond.

A mother taught her son. Her son, a young man with a clean record and who did nothing to draw such attention from the police, did everything right once those lights went on.

And still it wasn’t enough.

The immediacy of police dashboard and body cameras — and the mother’s knowledge of the court system and how to obtain the videos — swept us into this story via a viral YouTube video featuring Tija,Tae, several Louisville Metro Police Department officers and this traffic stop.

What happened also is how and why hard questions about law-enforcement practices in predominantly African American neighborhoods, like the one Tae was driving in and in which he lives, have been brought into sharper focus and have earned rebukes from other public officials.

Now her son was part of that story, one they’d tried to avoid with their own intentional living, through nothing he had done wrong.

Well, police said he did something: an illegal wide right turn.

The police video picks up behind Tae in his 2011 Dodge Charger (he uses his blinkers), an unseen foot in the police car throttling a revving law enforcement engine and the hyper chirps of a siren signaling for the teen to pull over.

The voice in Tae’s head, the one he sought this evening, is the one that has been teaching him about the rules (hands on the wheel, proof of insurance in the sunglasses compartment, “what you’re supposed to do”) and his rights all his life. He hears it up until he gets out of the car, and you hear him saying, “Mama, they’re taking me out of the vehicle’… ” and “Mama, they’re patting me down … ” providing a narration, just as she instructed.

She has been there for all his young life. He knew she would be there for him that evening, too. “If anyone could get me out (of this), it would be my mother,” he said.

Yes, Tija is already on her way, flying to the scene. “The longest five minutes of my life,” she said.

There was nothing and no one to reassure her when she got there.

“I was scared for my son,” she said. “I could tell by his body language that he was afraid and embarrassed and upset.”

She arrives, a fierce and sturdy presence dressed all in black, like an unbending, inescapable truth. She plants herself well within range of seeing and hearing what is going on with her son. She will not be moved. And she is ready.

Let’s be honest. She was ready long before.

Fourteen minutes into the stop, police will learn — and remark upon — the fact that Tija is a private investigator. She will even tell them she is an officer of the court, and everything she says and every pivot and stand she takes as the tape rolls, announces that expertise — her LinkedIn professional page lists her as a business owner (“Nothing Matters but the Facts”) who has a bachelor’s degree in criminal justice, and a master’s degree in justice administration — and more.

It’s the and more that especially distinguishes Tija, especially in this setting.

Longer than she has been an investigator, she has been a mother. Born and raised in Kansas on sports and family, she had her oldest child, a daughter, when she was in high school. She graduated high school and went to college on an athletic scholarship and played as a student and a mom.

Having her daughter altered her life. Family, not basketball and hopes for a pro career, became her priority. “They’re my everything,” she said of her four kids and two grandchildren.

In her prime on the basketball court, she was good at “turn ‘em and rip ‘em,” or turning her opponent with the ball and jumping to the side to which they were turning and stealing for the breakaway.

At the traffic stop, she burrowed down to the heart of that position: It’s about leadership, about being in control, about paying attention to all the details, about seeing what other people don’t see. That’s a lot about being a mom and an investigator, too.

As she stood there, she saw her son’s rights being violated, she said. But she knew she had to keep calm until the police finished what they were doing. Inside, the part she kept tamped down for the duration, she was frightened, frustrated and fuming — but what she showed was control.

“I was on the phone with him the whole way,” she tells one of the officers. “There was no improper turn. He says you were following him.”

In another segment of the video, the officer tells her that “luckily” for her the actions have been captured on their body cameras. “No,” she answers, “luckily enough for you.”

And this exchange: “He didn’t give you permission to search the [vehicle].” “We don’t need permission.” “Oh, yes, you do.” “We had a positive indication by the canine.” “Oh, my God. You got to be kidding.”

And a few minutes later: When an officer asks if she’s doing all right, she answers, “I’m pissed off for real.” Then about her son, a “working young man” who knows what to do, who doesn’t cause problems. “I’m an officer of the court. There are no drugs in my car.” (There weren’t.)

And a few minutes later, when one of the officers says they are part of a violent crime unit, assigned to patrol these areas and focus on traffic stops, her eye is on the whole picture again, seeing the detail — her son, the whole, real person that is her son — no one else sees: “I don’t want to hear about the history. … I just want to hear about my son.” And: “I appreciate y’all being out here for violent crime. My son is not a violent nothing. … There’s no reason for him to be out of the car handcuffed right now for a traffic ticket.”

They don’t know her son, a recent Central High School graduate, was homecoming king, that he’s a drummer and that he has played at events for the mayor and for Prince Charles. That his plan is to go to barber college.

She stands to the side and watches this play out.

“I knew from the beginning that they were wrong, and they didn’t care that I was there watching,” she said. “And even after I told them who I was, they still talked to me like I was nobody. Very disrespectful. And they knew it would all be captured on the body cam and didn’t care.”

Still, she was proud of the qualities Tae exhibited in that trying time. When she looked at him, the mother saw a mindful son who listened and learned, who did everything right, who was respectful, who wasn’t scared to say how he felt, who knew he was loved. “That was important to me,” she said.

When it was over and they could leave, she asked Tae if he wanted to drive home.

A half-block later, he pulled over, the impact of the experience hitting him instantly, she said. To ensure that that this would not be a harmful turning-point moment — she’d seen too much of that in her juvenile justice work — she immediately sought a therapist to help. Recently, she said, her son moved from two sessions a week to as-needed.

For Tae, who started barber college in November, his mother is not just the voice inside his head. She is the person who always is there, as a role model and as a presence. So, of course, during what was the scariest moment of his young life, he wanted her there with him, too.

“She raised me,” he said. “She knows everything about me. She’s always the one who took me to sports and school.”

She’s also the one who taught him to give everyone a chance and to treat others the way you want to be treated, the lessons she has taught all her children.

“As a parent, I expect respect towards me and towards any other adult they come across. Always,” she said.

“I support my children in all they strive to do. I praise them when they do well and still to this day correct them all when they are wrong. I don’t want them ever to feel alone in this troubling world. We are very close and family-oriented. We all see each other every day, in some way, shape or form.”

There’s another video on the Jackson’s Investigation YouTube channel. Set to Mary J. Blige’s “I Am,” it features family photos with Tija Jackson at the heart of many of them and was a Mother’s Day gift from one of her daughters several years ago.

Tija Jackson mirrors the song in what she says of her own family. “I love each and every one of them with everything in me,” she said.

That means what happened with her son isn’t over, not for her, anyway.

She has contacted an attorney, who plans to file a lawsuit against seven LMPD officers, including Chief Steve Conrad, alleging a violation of Tae’s rights. Illegal search and seizure laws.

She feels her son was “hunted.” She doesn’t want anyone else’s son, or any other mother, to go through what she and Tae did.

“I’m not looking for sympathy,” she said. “I’m looking for these policies to be exposed.” •