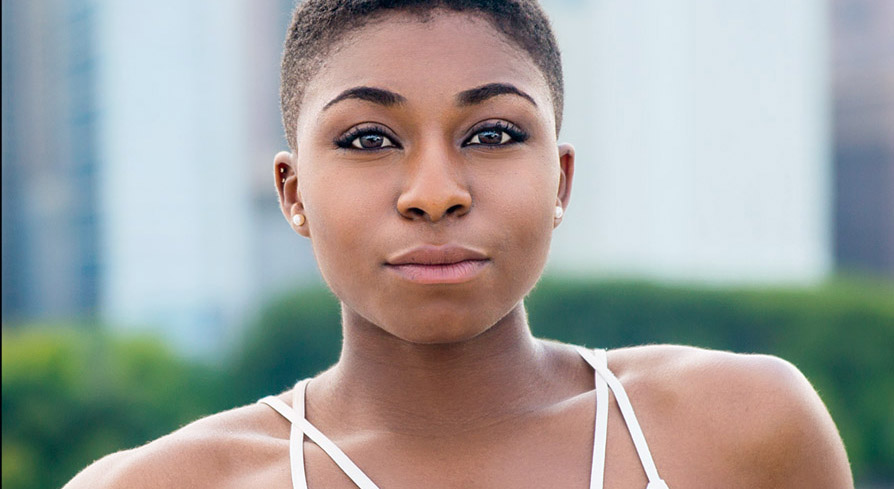 It may be hard to believe that someone who is now in the Broadway touring cast of the most popular musical in the country didn’t even imagine having a career in musical theater just 10 years ago.

It all started for Charnette Batey at New Albany High School, which she said has a “really prominent musical theater program — it’s not an arts school, but my school had this really dynamic, strong arts program there, so I was involved with that. Honestly, I wasn’t sure I was going to pursue musical theater as a career. I don’t think I knew that could be a thing. But I auditioned for the Indiana University musical theater program, and I went and got my BFA in musical theater.”

From there, the Louisville native moved to New York, started auditioning, setting out on the path that led to Lin-Manuel Miranda’s hit show “Hamilton,” though it wasn’t a short one.

“I got to New York in 2013. I started auditioning, just being in the right place at the right time, trusting myself. I went on to do a production of ‘Dreamgirls’ about three years after I moved, which was pretty awesome. I started to think ‘Yeah, maybe this was the right thing to do!’ I did a tour of ‘Seussical the Musical.’ I booked ‘Book of Mormon’ and did that for two years. And then I think I was in New York for about a year, auditioning and doing a few small productions — mainly labs and readings, which is still great work, getting to use that muscle.”

Even when “Hamilton” finally came into her life, it took not one, but seven auditions before she booked the show. “I don’t think I even originally auditioned for the company I’m with now,” she recalled. “It depends on where your placement is. For example, I auditioned in July, and they were looking to place me in the Chicago company. But they ended up finding a better fit for that company. So, they’re still going to call me in to audition for the next time they have an opening, but I might not book it because it might not be the perfect placement for me.

“I still don’t know exactly how it works. There are things that happen on that side of the table that until you’re on that side of the table, you don’t actually know how it works. But from what my agent communicated to me and what I trust is that they were being really sure I was the right fit for where they were going to place me. They had a callback and a work session, which is where you get to work with the creative team on the material. And then I had another series of callbacks and another work session and then I booked it. That was all stretched out in about a year and a half.”

Now Batey is not only an ensemble member, but also an understudy for all of the named female roles in the show. “Which is like, ‘Woah, dream come true to be in Hamilton. Dream come true again to get to play one of the sisters. Woah, dream come true overload to get an opportunity to step into the shows of all of those incredible characters.’ It’s pretty awesome.”

So how does she pull it off, knowing on any given night she could be playing any of the sisters? “I definitely have to train not only my physical brain but my spirit to go with the flow and be present. You never know what’s going to happen on stage when you haven’t been doing that track every night. My stage management will usually give me a text or phone call to do whatever I need to do to get ready for the show, so for each of the sisters I cover, I go over my notes, refresh my blocking, and go over my harmonies.”

In fact, on nights when she plays Peggy Schuyler, she already has the added challenge of getting into the headspace for two vastly different characters — because the actress who plays Peggy also plays the role of Maria Reynolds.

“It is really fun. You get to be the baby sister, the punchline; and then Act Two, you’re this hot, sultry seductress with the red lipstick and the beautiful red dress.”

Her favorite, however, is the character that was the most challenging when she started with the show — the leading lady herself, Eliza Schuyler Hamilton. “I feel really connected to her strength and her heart and her ability to forgive. It’s something that really resonates with me, telling the story from the perspective of a woman whose heart was so strong. I’ve found that when I’m on as Eliza, that’s when I feel like I’m sharing my heart the most.”

There’s no question that Hamilton has become a phenomenon that stretches beyond the niche of musical theater, and Batey is reminded every night how much the show means to fans. She recalled one letter that a fan wrote to the cast:

“This girl was really struggling with depression. I think she had maybe attempted to take her own life when she was really struggling. She had received the mental health help that she needed, but her mom told her, ‘If you stay alive, we’ll take you to see Hamilton.’ It just moved us all that she pushed through and stayed alive so that she could come see us. I think that’s the most incredible story I’ve ever heard.”

When asked about her favorite Hamilton experience, however, Batey said it’s yet to come. “I am looking forward to being in Louisville. It’s going to be incredible to be back where my family and so many friends are. It’s going to be so nostalgic, exciting, and crazy to be in the show that’s coming to The Kentucky Center. I remember going to shows there! Bringing it all home is going to be the most incredible part.”

Another chance to get ‘Hamilton’ tickets!

Didn’t get your “Hamilton” tix? There is still hope.

A digital lottery for tickets might mean you get a seat for just $10!

Also, a pro tip: Visit kentuckycenter.org or the Kentucky Center Box Office for late release tickets, which may become available.

The lottery will take place in conjunction with the show’s first performance, June 4, at The Kentucky Center. Forty tickets will be sold for every performance for $10 each. The lottery open at 11 a.m. Sunday, June 2 for tickets to the June 4 performance. Digital lotteries for each show will begin two days prior to each performance.

Here is how to do it:

You must be 18 or older and have a valid, non-expired photo ID that matches the name used to enter. Tickets are non-transferable. Ticket limits and prices displayed are at the sole discretion of the show and are subject to change without notice.

Lottery prices are not valid on prior purchases. Lottery ticket offers cannot be combined with any other offers or promotions. All sales final — no refunds or exchanges. The lottery may be revoked or modified at any time without notice.